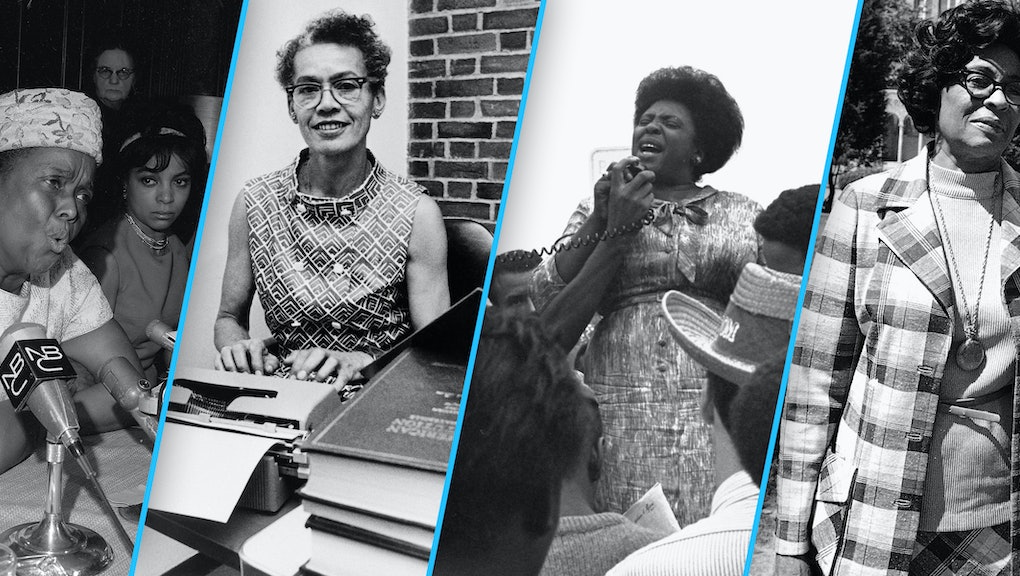 Jan. 16 marks Martin Luther King Jr. Day, a day honoring the legacy and achievements of one of the foremost leaders from the civil rights movement.

But while male leaders like King and Malcolm X are renowned for their contributions to the influential movement, the role women played in the civil rights struggle goes largely unnoticed. Americans may know the names of Rosa Parks or Coretta Scott King, but the numerous other women who played key roles in the fight for equal rights are too often wiped from the history books.

"There's a Chinese saying, 'Women hold up half the world,"' the late civil rights historian and NAACP chair Julian Bond told NBC News in 2005. "In the case of the civil rights movement it's probably three-quarters of the world."

Here are just nine of the lesser-known women who made indelible contributions to the civil rights era:

Described by President Barack Obama as "the godmother of the civil rights movement" upon her death in 2010, Dorothy Height served as the president of the National Council of Negro Women for 40 years, making her, the Washington Post notes, "arguably the most influential woman at the top levels of civil rights leadership."

During the civil rights era, Height coordinated on strategy with King and other civil rights leaders, the Post reports. Programs spearheaded by Height in her role at the NCNW included providing support to students who interrupted their studies to do activist work and "Wednesdays in Mississippi," in which interracial groups of women traveled weekly to Mississippi to foster communication and encourage black voter registration.

In addition to her civil rights work, Height was also a tireless champion of women's rights. "Dorothy Height deserves credit for helping black women understand that you had to be feminist at the same time you were African ... that you had to play more than one role in the empowerment of black people," Del. Eleanor Holmes Norton said, as quoted in the Post.

"At every major effort for social progressive change, Dorothy Height has been there," Rep. John Lewis said in 1997, the Post reports.

After serving as the director of branches for the NAACP, Ella Baker went on to play a key role in the civil rights movement by helping to organize both the Southern Christian Leadership Conference, led by King, and the Student Nonviolent Coordinating Committee, which went on to become one of the foremost advocates for human rights in the country.

"Until the killing of black men, black mothers' sons, becomes as important to the rest of the country as the killing of a white mother's son," Baker said. "We who believe in freedom cannot rest until this happens."

Amelia Boynton Robinson played a key role at the iconic Selma march, including helping to persuade King to focus his efforts on the city. During the influential march, which was nicknamed Bloody Sunday, Boynton Robinson was knocked unconscious and hospitalized. Her plight was immortalized in a famous photo from the demonstration.

In addition to her work in the Selma march, Boynton also holds the distinction of being both the first African-American and first woman to run as a Democratic congressional candidate in Alabama. She ran in 1964, prior to the passage of the Voting Rights Act, and earned 11% of the vote.

While many remember Rosa Parks' contribution to the Montgomery bus boycott, many don't realize Jo Ann Robinson was the most instrumental woman in its success. Following Parks' arrest in 1955, Robinson printed out and helped distribute 35,000 flyers encouraging a boycott of the Montgomery buses, and later worked with King and other local leaders to form the Montgomery Improvement Association.

The influential bus boycott, civil rights activists note, went far beyond Parks' desire to sit down. The bus boycott, Ruby Nell Sales told the Library of Congress, "was a rebellion of maids, a rebellion of working class women, who were tired of boarding the buses in Montgomery, the public space, and being assaulted and called out of there names and abused by white bus drivers. And that's why that Movement could hold so long. If it had just been merely a protest about riding the bus, it might have shattered. But it went to the very heart of black womanhood, and black women played a major role in sustaining that movement."

A founding member of the SNCC, Diane Nash served as a student leader of the sit-in movement in Nashville, Tennessee. Following the sit-ins, Nash played a key role in organizing Freedom Rides across the Deep South and later went on to help King as an organizer and strategist for the SCLC.

"It was clear to me that if we allowed the Freedom Ride to stop at that point, just after so much violence had been inflicted, the message would have been sent that all you have to do to stop a nonviolent campaign is inflict massive violence," Nash said about riots and bus burnings in response to Freedom Rides in the PBS documentary Freedom Riders.

Civil rights activist Fannie Lou Hamer worked with the SNCC and served as one of the founders of the Mississippi Freedom Democratic Party. The party was founded in 1964 in opposition to the all-white delegation the Mississippi Democrats had put forth. At the Democratic Party convention in 1964, Hamer delivered an impassioned speech for why the MFDC should be recognized.

"Is this America?" Hamer asked in the speech. "The land of the free and the home of the brave, where we have to sleep with our telephones off the hooks because our lives be threatened daily because we want to live as decent human beings, in America?"

Dubbed the "mother of the movement" by King, Septima Clark was a tireless champion of education. After working as a teacher for 40 years, only to be fired for refusing to resign from the NAACP, Clark began conducting workshops at the Highlander Folk School in Tennessee, teaching literacy and how to fill out voter registration forms and educating students on their rights and duties as American citizens. Clark then went on to become the SCLC's director of education, and the organization established the Citizenship Education Program based on her workshops.

As president of the Arkansas chapter of the NAACP, Daisy Bates championed racial equality and integration in the state. Bates played a key role in helping nine African-American students become the first to integrate into an all-white school in Little Rock, Arkansas. The fight for integration for the students, who were known as the "Little Rock Nine," attracted national attention and the support of the federal government, and Bates' home became the integration battle's headquarters.

"Daisy Bates was the poster child of black resistance. She was a quarterback, the coach. We were the players," Ernest Green, one of the Little Rock Nine, told NPR.

Lawyer Pauli Murray is a little-known trailblazer in the civil rights era. Murray, a queer woman who was arrested for refusing to move to the back of the bus 15 years before Rosa Parks, championed civil rights after earning her law degree from the University of California Boalt School of Law. Her book, States' Laws on Race and Color, was used by NAACP leader Thurgood Marshall in the organization's legal strategy on Brown v. the Board of Education, and Marshall referred to Murray's book as "the Bible for civil rights lawyers."

In addition to her legal contributions, Murray also co-founded the National Organization for Women in 1966 and became the first African-American woman to be ordained as an Episcopal priest. She became an Episcopal saint in 2012.