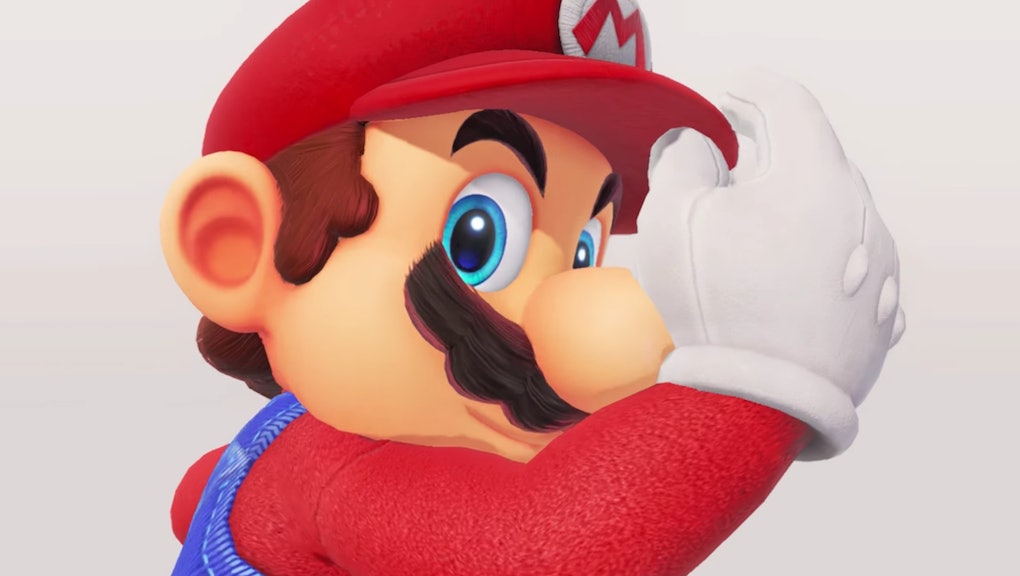 More than 20 years after Super Mario 64 — can you believe it's been that long? — Nintendo is finally releasing a new Mario platformer in the style of the N64 classic. The upcoming open-world Mario game, called Super Mario Odyssey, is coming to the Nintendo Switch in time for the 2017 holiday season.

During the Nintendo Switch's livestreamed coming-out party on Thursday night, Nintendo showed a nearly 3-minute trailer for Super Mario Odyssey, so there's a lot of little details worth unpacking.

Before we dissect this thing bit-by-bit, get caught up by watching the full trailer below.

OK, you good? I hope you brought discussion questions.

1. First things first: The giant metropolis we see several times throughout the trailer is called New Donk City. Carry on.

3. New Donk City is inhabited by real-looking people? I find this alarming.

4. Mario has an airship that will likely function as his fast travel mechanism to get from world to world. Note the globe mounted to the deck on his right. It will probably work like the galaxy map in Mass Effect.

5. The environments look like they'll be pretty open, but don't expect Watch Dogs 2-sized worlds. If you look at this screenshot of New Donk City, it seems like the stages will be relatively small, self-contained playgrounds.

6. In addition to New Donk City — which will probably function as a hub world of sorts — I saw three other worlds: the dark, industrialized forest area that's giving me serious FernGully vibes...

8. ...And the desert-like environment that seems inspired by Mexico.

9. Those "Crazy Cap" stores in the screenshot above pop up in several spots throughout the trailer. It seems like this will be where Mario can acquire new hats that let him transform, perhaps?

10. Speaking of crazy caps, the end of the trailer reveals that Mario's hat has... eyeballs?

12. Also, who the hell are these nightmarish rabbits?

13. Based on their dapper attire, I'm guessing they're somehow related to Bowser's gross scheme to marry Peach.

14. Though I'm not sure how projectile vomiting neon-purple fits into those plans. Maybe it's an innovative cake-decorating technique?

There are many months before Super Mario Odyssey officially releases, so Nintendo is likely to put out a few more trailers before then. If I had to guess, there's probably also a Japan-style level, based on that shirt Shigeru Miyamoto was wearing during the Nintendo Switch demo on Jimmy Fallon's show.