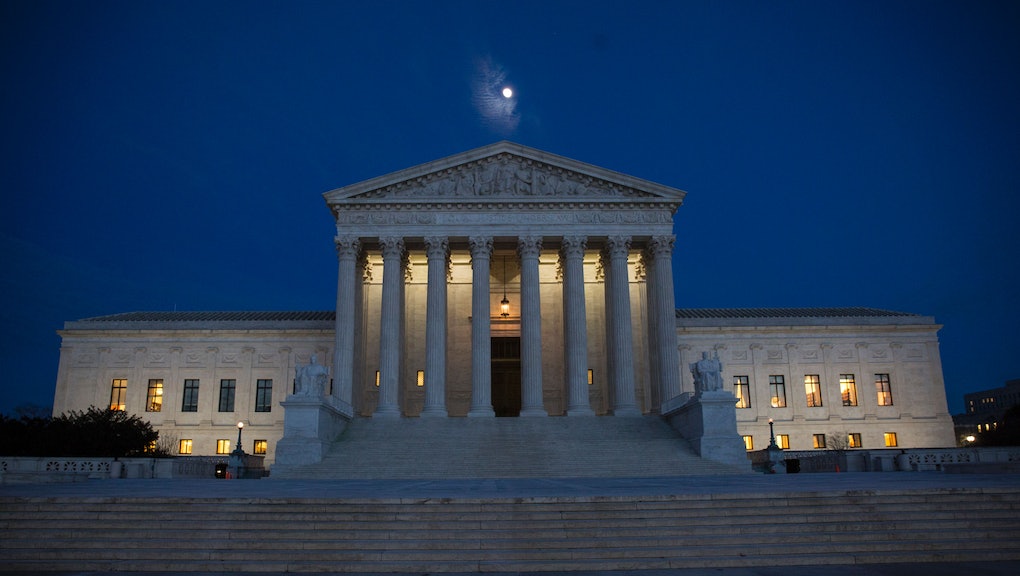 When Donald Trump pledged to overturn Roe v. Wade during the final presidential debate, it was still nothing more than a campaign promise: terrifying, but unlikely to come true by most counts. But now that he's won the presidency, all bets are off — and what was once a distant fear for reproductive rights advocates could soon become reality.

The months since Trump's victory have seen a renewed fight against the 1973 Supreme Court ruling, with Republican legislators leading the charge.

On Monday, Indiana state Rep. Curt Nisly introduced a bill that would reverse existing state laws making abortion legal and establish that human life begins at fertilization. The bill, HB 1134, is one of the most extreme pieces of anti-abortion legislation put forward by a state since the election.

And considering the all-out war the GOP has waged on reproductive rights, that's saying a lot.

In November, Texas health care officials ruled that abortion providers would be required to bury or cremate fetal remains; in December, Ohio Gov. John Kasich signed a 20-week abortion ban after vetoing a bill that would ban abortion after the first detected heartbeat. Earlier this month, Kentucky legislators proposed their own 20-week ban in the Senate, while the House proposed a bill requiring that all women see the results of an ultrasound before deciding whether to terminate a pregnancy.

At first glance, it might seem like these lawmakers are fighting a losing battle: After all, Roe v. Wade is still the law of the land, and there's still a majority of justices on the Supreme Court who believe in it.

Look more closely though, and it becomes clear there's an endgame here — and it doesn't stop at state lines.

"These laws are strategic," Michael Gerhardt, a constitutional law professor at the University of North Carolina at Chapel Hill, said in a phone call Friday.

Gerhardt explained that there are two kinds of anti-abortion bills: those that are explicit in their goal to overturn Roe v. Wade — like Indiana's — and those that are more subtle, like the Texas law the Supreme Court struck down in June that required abortion clinics to function like hospitals. Lawyers call these more covert laws "neutral on their face": They don't necessarily own up to their intentions of limiting access to abortion but end up producing the same effect.

That these laws manage to take hold in conservative states is not just a problem for those states' residents, but for all those who rely on Roe v. Wade to protect their abortion rights.

"Legislators are looking to carve out exceptions to weaken Roe v. Wade," Gerhardt said. "Think of the ruling like a house: If you keep hacking at the foundation, eventually you're going to be able to tear the whole house down."

That process might take years, Gerhardt said. But with each anti-abortion state law that passes, the greater the precedent for overturning the landmark decision.

The death of Supreme Court Justice Antonin Scalia — and Republicans' resistance to vote on President Barack Obama's nominee, Merrick Garland — leaves Trump with the opportunity to appoint an anti-Roe v. Wade justice right from the outset. This first appointment won't be enough to overturn the ruling, though, since the justice would be replacing another opponent of abortion rights.

Trump's next appointment, though, could make all the difference: If the president-elect successfully brings on two justices keen on reversing Roe v. Wade, it would produce a 5-4 vote in favor of the repeal, according to Gerhardt. During the next four years, Trump could appoint as many as four justices, which could make for a landslide vote against Roe v. Wade.

"If one of the five justices [who support Roe v. Wade] steps down, it becomes a very different case," Gerhardt said. "You might see states pass a series of enactments designed to test the new justices to see if they're prepared to overturn Roe v. Wade."

Gerhardt called this "the long game."

Whatever the strategy, Gerhardt assured that anti-abortion advocates know exactly what they're doing.

"This is not a new strategy, but it may be the case that the recent election has emboldened these groups," he said. "It's a great time for them to strike while the iron is hot."