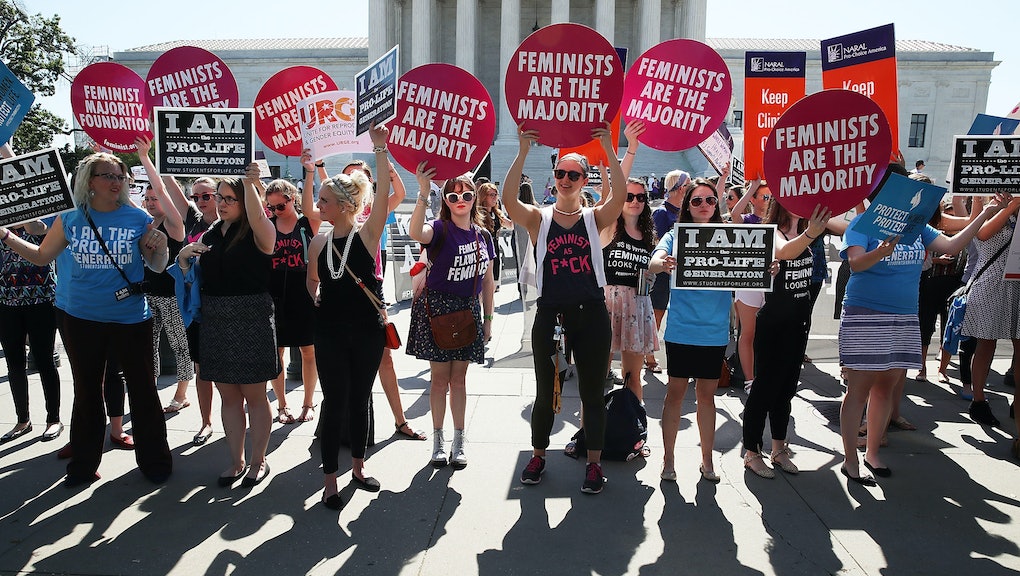 Once again, statistics suggest that abortion rates drop as access to contraception improves.

New data from the Guttmacher Institute show abortion rates are at their lowest point since 1973's Roe v. Wade decision, NPR reported Tuesday. The report shows that in 2014, 14.6 abortions were performed for every 1,000 women aged 15 to 44. That's down from when abortion became legal in 1973, when the rate was 16.3 abortions for every 1,000 women.

The link between free contraception and fewer abortions has already been established, but as NPR reported, anti-abortion groups believe that sinking abortion rates represent the success of restrictions recently imposed upon the procedure. Certainly, efforts to outlaw abortion have escalated in the past few years: In 2016, 18 states enacted 50 new restrictions, resulting in 338 restrictions adopted since 2010. For many women, ending an unwanted pregnancy is a difficult proposition.

But as Rachel Jones, the Guttmacher report's lead author, told NPR, abortion rates dropped across the board. States with fewer abortion clinics didn't necessarily see fewer abortions, and the birth rate is dropping nationwide. Unintended pregnancy rates have also been declining in recent years. It would seem that people are increasingly able to prevent pregnancies, rather than abort them.

Shuttering Planned Parenthood's doors, another avowed goal of the Donald Trump and Mike Pence administration, would only compound the negative effects of the repeal — it's still overwhelmingly low-income people who end up getting abortions.

According to the Guttmacher Institute's most recent numbers, 75% of 2014's abortion patients were poor or low-income. Similarly, 75% of Planned Parenthood patients have incomes at or below 150% of the federal poverty line. Not all of those patients receive abortions, of course: 31% of the organization's services are contraceptive, and Planned Parenthood estimates that it prevents nearly 200,000 abortions annually.

Since the election, women have rushed to get long-lasting contraceptives like IUDs. Planned Parenthood reported a 900% increase in requests for the device. While it's not difficult to forecast what will happen when women lose access to reproductive health care — abortion becomes unsafe, not nonexistent — it will be interesting to see if the recent IUD rush helps keep abortion rates low, even as abortion access comes under heavier fire.