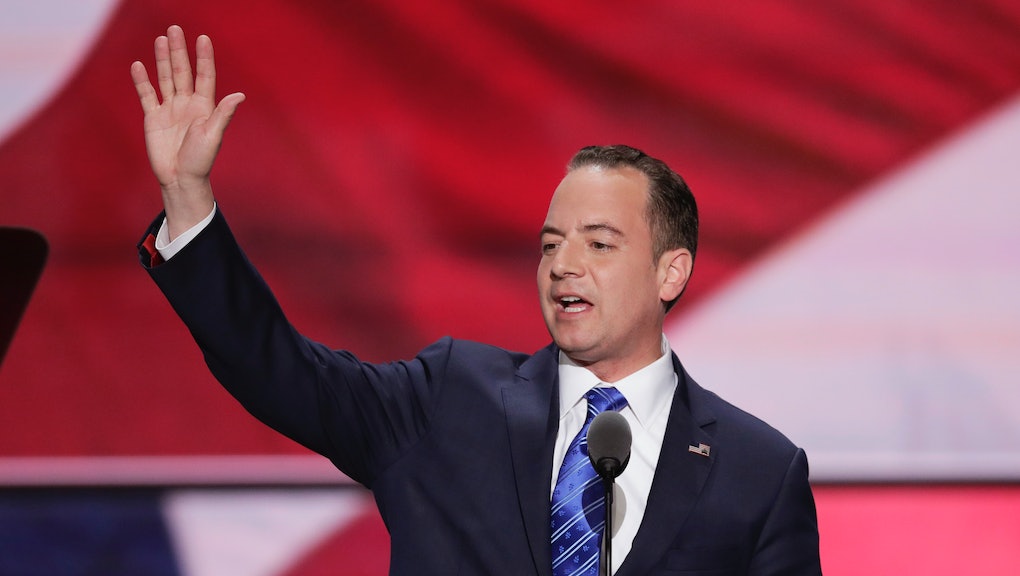 On Jan. 15, Donald Trump's chief of staff, Reince Priebus, appeared on several Sunday morning shows to defend Trump's agenda as the country gears up for a new administration. On ABC's This Week, Priebus asked President Barack Obama to tell Democrats to stop delegitimizing Trump's election, according to the Washington Times.

In an interview with NBC's Meet the Press host Chuck Todd, Priebus confirmed the conversation between incoming national security advisor Michael Flynn and Russian ambassador to the U.S. Sergey Kislyak. But, according to Priebus, the talk did not address President Obama's sanctions.

For many, the fate of Trump's agenda will depend on Priebus' performance, because the job promises to be grueling and emotionally taxing. In fact, the average tenure of a White House chief of staff is about two years, according to the New York Times Magazine. As Vanity Fair's Chris Whipple wrote, "The right chief can help a president govern effectively; the wrong one can spell ruin."

So how will Priebus try to execute Trump's agenda? Here are our predictions.

Save1. Uniting the GOP

Priebus must walk the thin line between Trump's erratic personality and politics. In 2012, Priebus called on the GOP to be a more inclusive party and abandon its anti-immigrant stance. Time will only tell if a Republican-run Congress and Trump will heed Priebus' words.

2. Defending Trump at all costs

When Walter Shaub at the Office of Government Ethics said Trump's plans to divest his assets were "meaningless,"  Priebus warned him to "be careful" in his criticisms, the Huffington Post reports.

3. Fending off the press

Speaking Sunday on NBC's Meet the Press, Priebus said the Trump team is considering moving the press corps to the Eisenhower Executive Office Building, a short walk away from the White House. The measure does not bode well for the press, since Priebus dodged the question on whether the Trump administration would allow reporters to continue to work in the White House.

If the Trump administration wants to be successful, Priebus will have the difficult task of being the catalyzer within the White House. According to the New York Times Magazine, Priebus will share the same level of influence with Steve Bannon, Trump's chief strategist and senior counselor. When describing the synergy between the two, the Times wrote the following:

"A generous reading is that Trump is trying to foster a yin-yang tension between his top deputies, who will represent his own diametrically opposed impulses (Bannon the bomb-throwing devil on one shoulder, Priebus the peacemaking angel on the other).

Being a gatekeeper is similar to being normalizer in chief, but the difference here is the role Priebus will play when lobbyists and some GOP members try to exercise their own agenda, especially when there is an imminent power struggle between the chief of staff and Bannon. "The paths are very weird, and you've got to be creative," a Republican lobbyist told Politico. "It's like this big amoeba where you have to figure out different entry points."