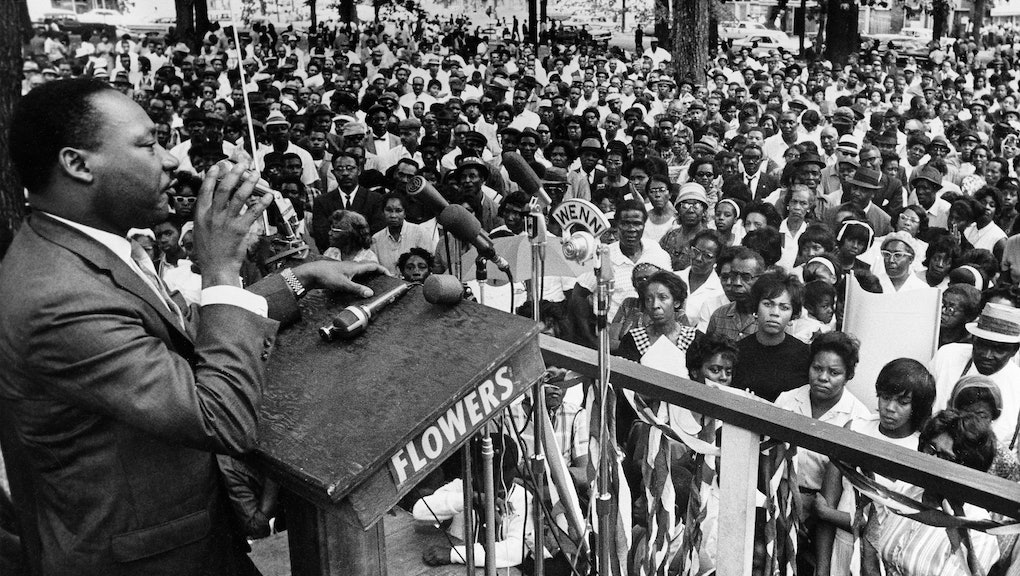 One graphic designer is taking a stand during Martin Luther King Jr. Day. Artist Daniel Rarela designed a series of memes to stop the late civil rights leader from getting whitewashed this year.

On Sunday, Rarela took to Twitter to share black and white images — old and new — with quotes from Martin Luther King Jr. However, Rarela didn't pull quotes from King's Aug. 28, 1963 "I Have a Dream" speech. Instead, his images contain lines from King's "Letter from a Birmingham Jail," which was written on April 16, 1963.

"The idea for these memes came about last year in the midst of so many unarmed black men dying at the hands of police," Rarela said in an email interview with Mic. "I noticed that several people I was connected with on Facebook had nothing to say about their deaths; although some would occasionally point out character flaws with the victims as if to justify their deaths somehow."

According to Rarela, the memes really came to life after the peaceful Black Lives Matter protest in Dallas in July turned deadly. Five police officers were killed and seven others were wounded by Micah Xavier Johnson, a military veteran who served in Afghanistan.

"I saw those same Facebook friends suddenly posting quotes [and] memes about love and peace from Martin Luther King Jr.," Rarela continued. "My first thought was, 'Oh, so it's ok for you to quote MLK and care when police officers die, but not when others die at the hands of police brutality?' The selective compassion really rubbed me the wrong way, as well as people trying to promote love and peace through Martin Luther King Jr. without talking about the racial and economic justice he championed."

That drove Rarela to design the memes for Martin Luther King Jr. Day.

"As a graphic designer, I wanted to shatter this false image of a Martin Luther King who everyone loved, never got arrested, was universally popular and made zero privileged people feel uncomfortable or angry enough to want to kill him."

Using old images, as well as current ones, Rarela placed quotes from King's "Letter from a Birmingham Jail" over top. The overall design was a tribute to contemporary artists Barbara Kruger, with the decision to make all the photos black and white a creative one.

"[I wanted] to emphasize how timeless Dr. King's message really is."

You can check out more of Rarela's "Letter from a Birmingham Jail" memes below.