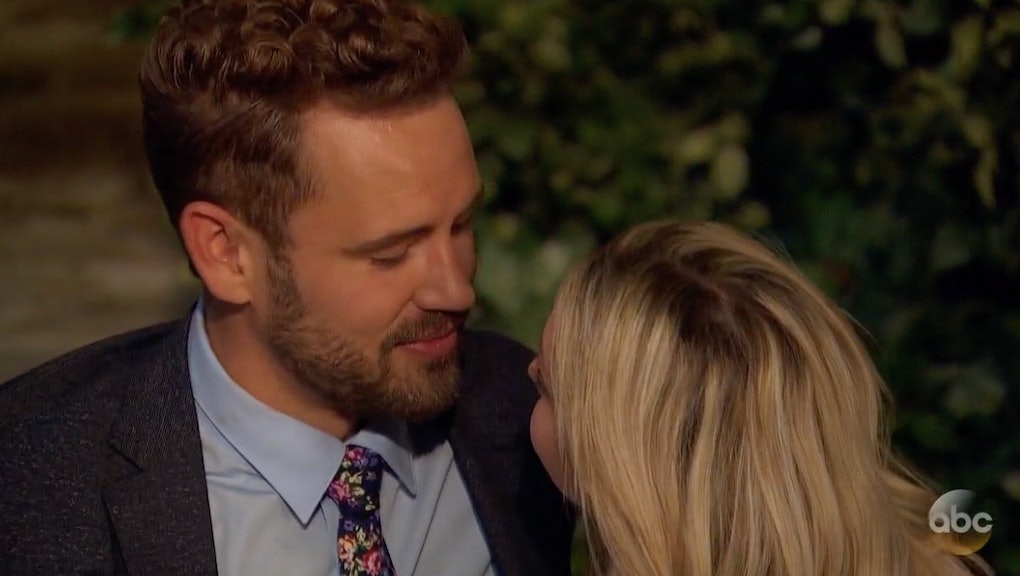 Welcome back fellow adventurers to another episode of Nick Viall's redemption tour, aka The Bachelor. Last episode ended with a cliffhanger after Nick sent home Liz (they had sex after Jade and Tanner's wedding, remember? REMEMBER?), and this episode had Nick trying to prove he's overcome his bad-boy past by explaining to all the women that he's not actually the kind of guy who doesn't call after a one-night stand, or whatever.

We also said goodbye to a gaggle of women — including Hailey, Lacey, Elizabeth and Dominique — watched Vanessa barf and got the scoop on Corinne's overworked nanny.

It opens with an over-the-top recap of last episode's drama. Back at the mansion, everyone is panicking/gossiping about what happened with Liz while they prepare for the rose ceremony. Nick walks in and drops a logical explanation about why he sent Liz home while all the women make googly shocked eyes at him in their cocktail party gowns.

They split up for some very awkward one-on-ones, so Nick can explain, yet again, that he and Liz had sex. They met at Jade and Tanner's wedding. Did you hear? Have you heard?

They absolutely grill him, which seems a little over the top, but it gives him a chance to flirt with Danielle L. and stroke her arm while she tells him how "open and honest" he is — and also that her grandparents have been married for over 50 years. You go girl.

Our resident villain, Corinne, is all alone and putting on (and then taking off?) a trench coat in an upstairs bathroom while everyone else is processing their feelings about Nick and Liz. Also she says "intercourse." Of course. She says she wants them to "explore each other sexually" and then shows up for a one-on-one wearing nothing but a coat, heels and jewelry.

Also some whipped cream, which she squirts into Nick's mouth. She also puts it on herself and commands him to "take it off my boob." Nick unconvincingly tells the camera that he is trying to "appreciate everything about Corinne."

Meanwhile everyone else in the house is spying on them and gossiping about her. "What is the whipped cream for?" someone asks. It's for licking. Obviously.

She and Nick are interrupted when Jasmine comes creeping through the bushes near them. He asks her to join and says goodbye to Corinne. She's disappointed that her plan to seduce Nick didn't work as well as she wanted, so she cries in a bathroom.

The gals gather for the rose ceremony — except for Corinne, who is apparently asleep? She cried herself to sleep? Nick doesn't want to start the rose ceremony without her, even though she already has a rose from an earlier date, but then he just does.

Nick hands out roses as Corinne gently snores upstairs. Hailey, Lacey and Elizabeth get sent home. But don't worry, because Alexis, aka shark gal, is still hanging in with the rest of them.

The next morning Chris Harrison shows up to announce a group date that will be "mind-blowing." Danielle L., Christen, Kristina, Whitney, Taylor, Jasmine and Corinne are all going — and they somehow immediately realize from a one-word clue that the date is Backstreet Boys-themed.

In walks ... the Backstreet Boys. They're greeted with appropriate screaming and jumping from the women. They cheesily launch into an a cappella version of "I Want It That Way," which is both tragic and beautiful. Party like it's 1999.

The group-date limo pulls up at a studio where the Backstreet Boys (and Nick) are waiting and eager to plug their upcoming Vegas residency. It turns out the date is a dance challenge — they're all going to be backup dancers, and the best dancer gets a special onstage moment with Nick.

Jasmine and Danielle L. are amazing dancers, and Corinne is ... not. She feels uncomfortable, so she runs off to cry in the bathroom. To be fair to her, taking a dance class in front of the collective presence of the Backstreet Boys, the person you want to date AND millions of at-home viewers sounds like an absolute nightmare. But everyone else seems like they're doing fine.

The time comes for the performance, and Nick and the gals strut out onstage like the most popular kids at camp. Their dance looks passable.

The Backstreet Boys crown Danielle L. as best dancer, or, whatever, and she and Nick slow dance in front of a crowd as the Backstreet Boys sing to their faces. Corinne practically combusts with jealously from the side of the stage.

After the performance, they head to some kind of candlelit-lounge situation, and Corinne "grabs Nick first." She "apologizes" for not coming to the rose ceremony, and she and Nick do kissing, which perks her up a little. She happily goes off to nap while the date continues without her.

Danielle L. and Nick tell each other how super into each other they are and do some more slow dancing. Back at the mansion, the date card arrives for the next outing. Vanessa's getting this week's one-on-one date, much to Dominique's disappointment.

On the date, Corinne wakes up from her nap and tells the gals she wants a boob job, isn't ready to have a baby and still has a nanny who makes food for her.

Jasmine immediately goes to the bathroom to debrief this bizarre and upsetting news. Danielle L. gets the group date rose, no surprise, and the gang backs it in.

Nick strolls in for his date with Vanessa looking full-on Top Gun in a flight suit. They meet at the tarmac, and Vanessa tells him she doesn't want to skydive. Don't worry! That would be way too much! Instead you'll be in a plane as it free-falls through the sky.

Nick and Vanessa bounce around like they're in Willy Wonka's factory except sexier, because there's kissing. Until she gets nauseous from all the nosedives they're doing. Nick stares straight into her face while she pukes, which is bizarre but maybe nice of him? Hard to say.

Nick is somehow enjoying taking care of Vanessa while she barfs — he even kisses her after, which is truly shocking.

At the mansion, Rachel, Alexis, Astrid, Jaimi, Sarah, Brittany and Dominque get the next group date. Alexis pumps her little shark fins in the air with joy.

Post-puking, Vanessa and Nick have the nighttime part of their date at the top of a building. Vanessa tells Nick that he's nice because he has a nice mom, which seems like a leap but OK. She pokes around a little in his past and asks about his feelings on past seasons — and he tells her he really wants to find love. Then he cries a little, and they kiss. Let's move it along, gang.

The next day's group date is basically ... a gym class? Nick runs up to all the women in workout gear and they all take turns hugging him. Today's special guests are Olympic athletes Allyson Felix, Michelle Carter and Carl Lewis — who are tasked with unfortunate lines explaining that today's challenge is to win the gold, which is "Nick's heart." His heart is the gold.

The various challenges include running, jumping and throwing as Nick watches from the sidelines. Finalists Alexis, Astrid and Rachel compete to spend some extra time with Nick by racing for a ring, which Astrid snags in a photo finish. She and Nick make out in a hot tub while Dominque, who hasn't gotten to spend any time alone with Nick, feels down about that.

At the evening part of the date, Dominique confides in Rachel about how upset she is after not getting any time with Nick. Rachel is super supportive and encourages her to talk to him about her feelings.

But later, Dominique walks by while Nick is kissing Rachel, and it hits her hard. So she sits down with Nick and tells him that she thinks he wasn't fair to her during the date. She thinks he wasn't paying enough attention to her, and he's caught off guard. It's stressful and painful, and he tells her that their relationship just isn't progressing — and maybe it's time for her to head home.

Dominque exits in an abrupt, curbside goodbye. The other women seem a little sad that she's gone, but they move on quickly. Rachel gets the date rose, and she's feeling optimistic about her chances of making it to the end.

The next day, Chris Harrison shows up at the mansion to tell everyone that instead of a cocktail party they'll be having a pool party. Everyone puts on their bikinis and girds their loins in preparation for Nick's arrival.

Everyone is psyched to rub their bodies against Nick's in the pool — but Corinne has another plan. She invites Nick to bounce with her in an inflatable bouncy castle out in front of the house — and proceeds to make out with him while the other girls spy from a distance.

Once Corinne goes off for a post-bouncy castle nap, Raven takes it upon herself to sit Nick down and spill the dirt about Corinne's nanny. And she's not the only one to pull Nick aside and complain about Corrine — Taylor and Vanessa do the same thing.

Everyone is fired up about Corinne — but we'll have to wait until next week to find out what happens, because this episode ends here, without a final rose ceremony.