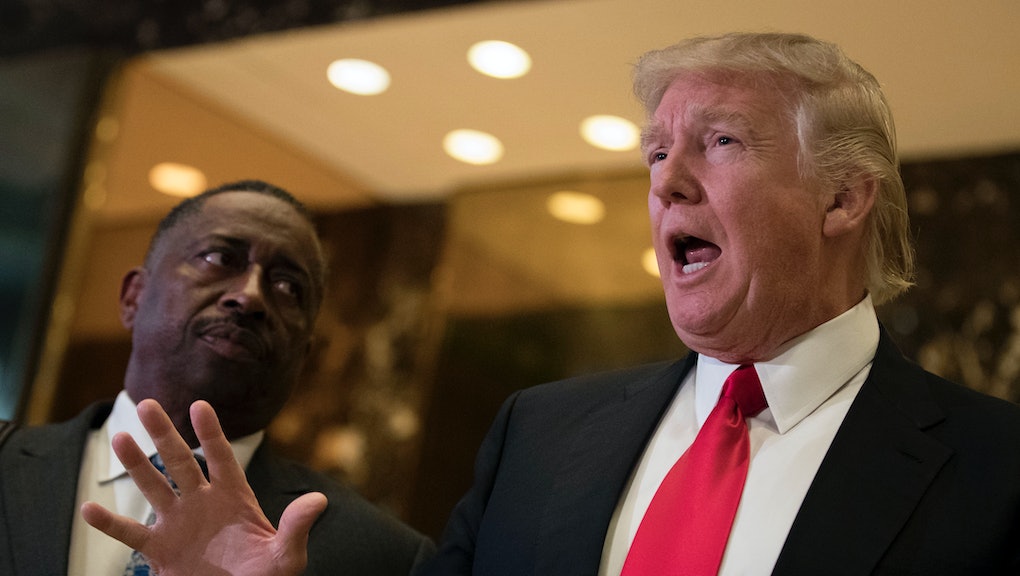 Donald Trump's approval rating at a historic low, according to poll

Along the bumpy road to inauguration, Trump has added Wall Street executives to his cabinet, he lashes out at critics with such regularity that the pattern behind his bizarre Twitter habits is becoming clearer; he's put the U.S. on unsure foreign policy footing, has a questionable dossier on his relationship with Russia that people are laughing at regardless of its legitimacy, a growing list of members of Congress refuse to attend his inauguration, he's got a dizzying array of conflicts of interest, and is developing a growing attachment to labeling anything he doesn't like "FAKE NEWS." Unsurprisingly, this hasn't been great for his poll numbers.

According to the CNN poll, about 53% say Trump's "statements and actions" since the election have made them less confident in his competency. CNN noted that Trump's disapproval rating has increased since the election — from 45% to 52%. CNN noted that their favorability polling for Trump has also seen a slight decline of 3%, but it's within the margin of error and therefore "not statistically significant." Whether he's at 47% favorability or a hard 44% doesn't matter much, though, as Trump is still managing to pull in almost 20% lower favorability ratings than any recent president, according to an earlier Gallup poll — George W. Bush, as president-elect, had 62% favorability; Obama had 78%.

In a poll released Monday, Gallup found Trump holds an 82% favorability rating among Republicans — lower than favorable ratings of prior presidents within their own party "at this point in their ascension to the White House." Gallup noted:

"Bush had nearly unanimous favorability from fellow Republicans in January 2001, with 97% of GOP respondents rating him favorably at that time. Obama (95%) and Clinton (92%) enjoyed favorable opinions from more than nine in 10 Democrats."

CNN's poll, however, found Trump with an 89% approval rating among Republicans. It also reinforces the image of who Trump appealed to during the election:

While Trump's unfavorables are winning out against his favorables with a net of -9% in the CNN/ORC poll, vice president-elect Mike Pence is actually not doing so bad. CNN's poll found Mike Pence has a favorability rating of 40% to 37%. Notes CNN: "Republicans rate Pence slightly lower than his new boss, 75% have a favorable view of the VP-to-be while 89% have a positive take on Trump. Among Democrats, however, Pence earns higher marks than Trump, 16% see him favorably vs. 9% who say so about Trump."

Beyond his general popularity, American confidence remains moderately high: 71% believe he'll impose tariffs on companies that manufacture in Mexico, and 61% believe he'll renegotiate NAFTA as well as create "good-paying jobs in economically challenged areas." On the other side of the scale, CNN found:

"About half think Trump will be able to simplify the tax code (50%) or protect sensitive electronic information from theft by foreign governments (48%). Fewer, 44%, say it's likely that Trump will be able to build a wall along the border with Mexico, and just 29% believe he will be able to get Mexico to reimburse the United States for the construction of the wall. About four in 10 think the president-elect will be able to defeat ISIS, down from 50% who said so in November."

Only time will tell if the president-elect follows through on his campaign promises — including the one where he said he'll be "so presidential."