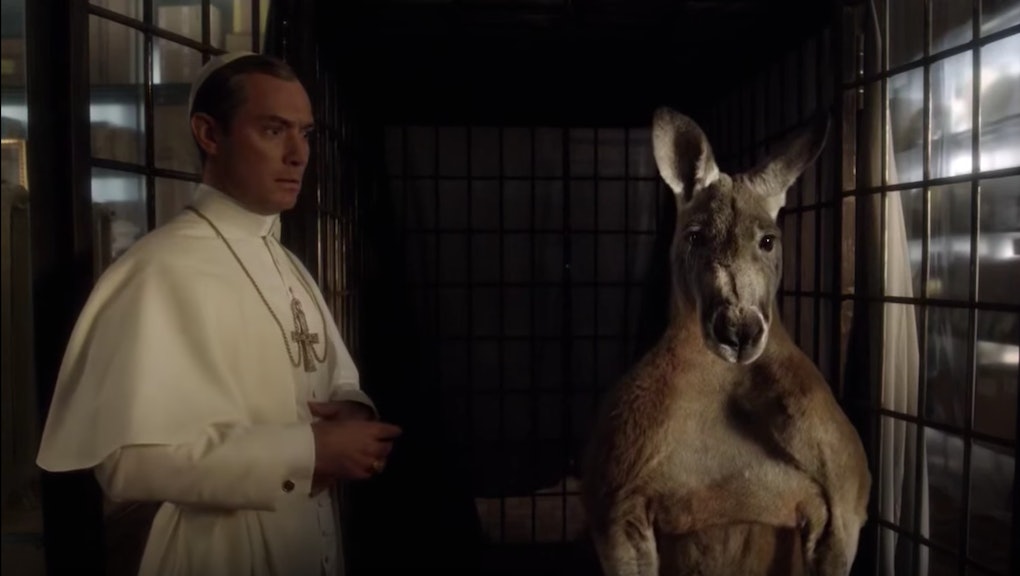 'The Young Pope' confessional: What's the deal with the kangaroo?

We assure you, HBO's newest drama The Young Pope was not designed with internet memes in mind — its star, Jude Law, didn't even know what memes were until last week. But every aspect of The Young Pope is tailor-made for parody: There's a pope, who is young, and an aura of absurdity that began when the show opened with Pope Pius XIII emerging from a pyramid made of literal human babies.

So why shouldn't the Vatican also have a kangaroo? Yes, a kangaroo.

The second episode of the series features Pius XIII rummaging through the gifts world leaders have sent to celebrate his appointment, but his attention is drawn to muffled grunts from across the room. A cardinal wonders if it's mice, but Pius XIII, wisely, posits that a mouse couldn't make that noise (they can't). He comes to a huge cage, yanks off the tarp covering it, and opens its door.

"You can come out, sweetie," the young pope says, with the effervescent charm of Jude Law. A kangaroo walks out, chills next to him, and Pius XIII declares that the kangaroo won't be sent to the zoo as initially intended. He's going to live in the Vatican gardens. Twitter was blessed with another gem from The Young Pope, and responded in kind.

But is there any purpose to the kangaroo in The Young Pope, aside from the obvious WTF-ery of the moment? We can only think of one metaphor, which, granted, is already a bit of a stretch. But here it goes.

Why does a kangaroo at the Vatican seem so funny and strange? Because a kangaroo shouldn't be at the Vatican. Pius XIII probably isn't a kangaroo — he's just odd — but he is thrust into the opulent halls of the Vatican with very little familiarity with its politics and the cardinals that comprise it. Aside from Sister Mary, who's brought in at Pius XIII's behest to advise him, the pope doesn't have anyone in his corner.

Perhaps he sees this kangaroo as a symbolic extension of his isolation — by freeing it in the gardens, he's trying to make himself feel welcome in a foreign place. After all, if there's some inherent purpose to The Young Pope, the show is a strange but poignant mediation on absolute power and loneliness.

The pope's isolation is a recurring theme in the show, albeit more apparent in future episodes. You see glimpses of that in episode two when the pope desperately tries to win back his mentor Cardinal Spencer, who still feels scorned that he wasn't selected as the pope (he's old though). There would be easier ways to demonstrate this feeling than tossing a kangaroo into the show, but showrunner Paolo Sorrentino is nothing if not bonkers with his creative vision.

Alternatively, there could be a kangaroo because Sorrentino simply gives no fucks — much like this young pope, who does not appear to fuck.

The best from The Young Pope Twitter, week one

The Young Pope's meme-ability was in full force even before the show premiered in America, but with two episodes in the books (HBO is airing Pope-isodes every Sunday and Monday night for five weeks), the Twitterverse has new material to work with. Week one did not disappoint.

Here's some of the best Young Pope tweets from the week, including Pius XIII's similarities with Beyoncé and how our gracious pope would try to conjure up a fake ID.

Until next week, bless up.