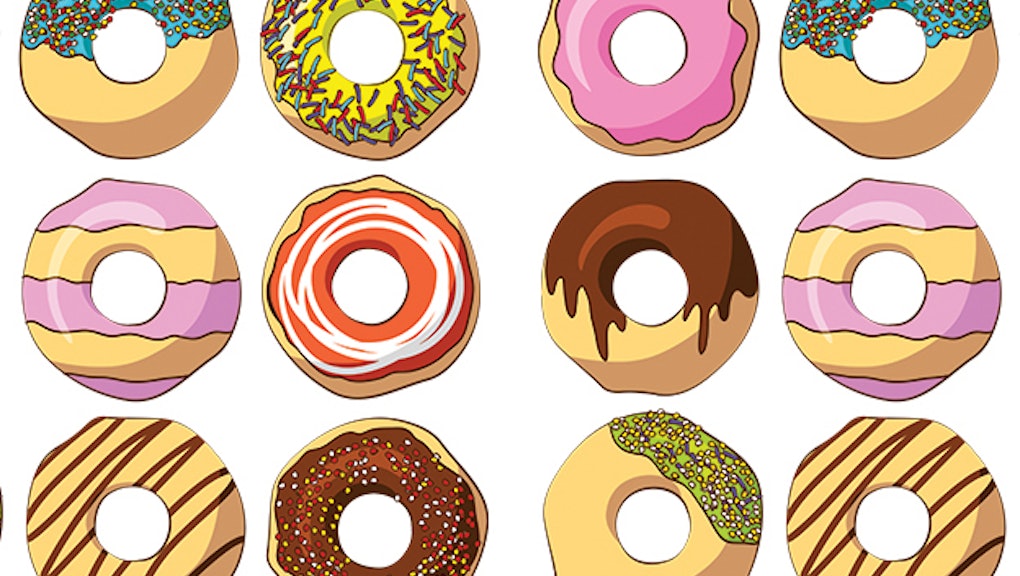 Why are more than one-third of Americans obese? The popular belief is that they bite off more than they can chew — or, perhaps more scientifically accurate, people consume more calories than they expend.

This theory has dictated the way many Americans navigate their food. It's the foundation of the platitude "moderation is key." It has led the billion-dollar diet industry to focus its energy in the direction of emphasizing appetite suppression, lower-fat versions of sweet favorites and calorie counting programs crossed with increased exercise for successful weight loss.

But what if this theory about why we're fat is just... wrong?

Gary Taubes, a science writer and the author of The Case Against Sugar,  believes it is. The real flaw in the theory is that it belittles the power of food. The body metabolizes different foods in different ways, Taubes explained in an interview, and sugar is, in the case of weight gain, its biggest obstacle.

Take the food in the image above. The meals in the left column (avocado toast with a scrambled egg, carrot soup, sweet potato and chickpea curry and fruit, vegetables, popcorn and Greek yogurt for snacks) actually contain the exact same number of calories as the meals in the right (chocolate cereal, ham sandwich, ready made lasagna with a baguette and chocolate, biscuits and soda for snacks). Both diets have 2,031 calories, according to registered dietitian Nichola Whitehead, but, by Taubes' reckoning, they'll have very different effects on the body. Eating 50 calories of chickpea curry won't affect a person the same way 50 calories of biscuits might.

The diet in the right column above is heavy in added sugars. Fructose — the sugar found in soda and candy — is metabolized by the liver. "If the dose of sugar hitting the liver is high enough, the liver cells will have trouble oxidizing it, so some of it will be converted to fat," Taubes said. "The assumption that I’m making is that this process leads to fat accumulation in the liver, which leads to a condition called insulin resistance."

With insulin resistance, the body's "muscle, fat and liver cells do not respond properly to insulin and thus cannot easily absorb glucose from the bloodstream," according to the National Institute of Diabetes and Digestion and Kidney Diseases.

If the theory sticks, it might help abolish obesity discrimination

If Taubes' more-than-an-inkling is correct, the stigma surrounding obesity might see some relief. Taubes said he's passionate about the issue, in part, because of the discrimination he witnesses against people with obesity — particularly children:

"All I have to do is think about obese kids —  there’s this injustice being perpetrated on obese people everyone. One is this assumption that they lack willpower, that they’re lazy and gluttonous. The other injustice is that in order to try to cure them, we torture them. We do precisely the wrong thing. We [prescribe] exercise and starving."

Doctors currently prescribe their overweight patients treatment that aligns with the theory that obesity is too many calories in and not enough out. Taubes' proposal could influence these treatment plans.

But it also has bigger implications

The food industry would be pretty pissed to see this sugar-scathing theory gain traction. There are already empirical findings that support the framework of Taubes' thinking, but sugar-fueled corporations have invested plenty in getting the old science to stick.

In 2015, for example, Coca-Cola funded scientists to report that exercise, not cutting calories, is important for maintaining a healthy weight, the New York Times reported. The Coke-funded study turned out to be more alternative fact, less truth.

There's definitely more research to be done, and Taubes is the first to admit it. But the bedrock to his theory is this: "If we fix what we eat, how much [we eat]' will work itself out."