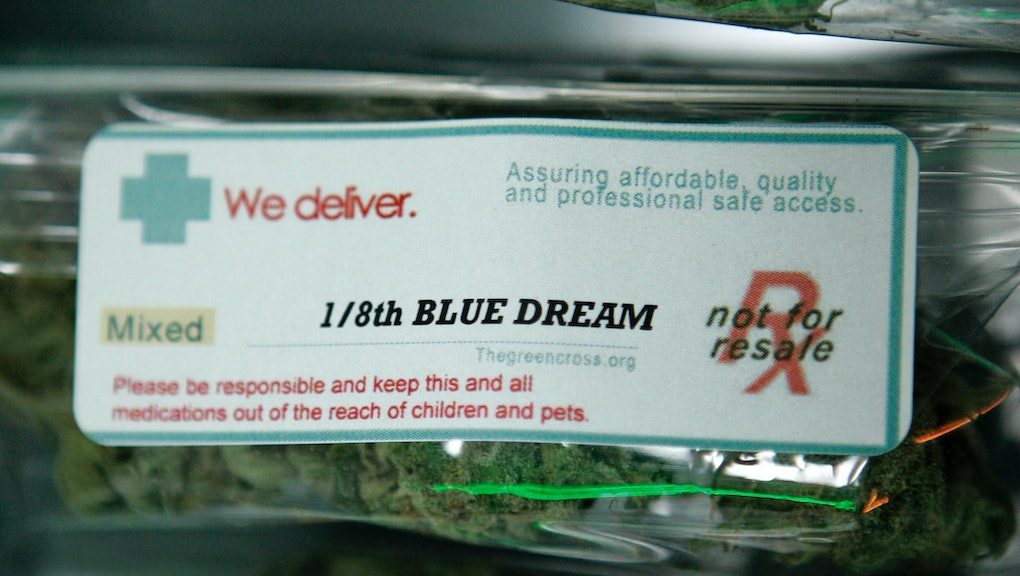 How much is an eighth of weed? Price, weight, photos, size, slang and more

This story is part of a series on legal marijuana, answering common questions about smoking, vaping and edibles.

Don't fret. Weed lovers would never make anything needlessly complicated, and indeed, with enough experience, an eighth will come to feel like an intuitively graspable measurement, like a tablespoon. For now, though, let's start with the basics.

How much does an eighth of weed weigh?

While the size and density of an eighth of weed depends very much on the strain you're buying, what never changes is the weight. Quite simply, an eighth weighs an eighth of an ounce — hence the term — which comes out to about 3.54 grams, if you're metrically inclined, and often just a flat 3.5 grams, at least on the street. In other words, it's pretty light; by comparison, a nickel coin weighs exactly 5 grams.

What's the size of an eighth of weed?

Cultivated cannabis is relatively light, so it can take a surprising number of buds to weigh out to an eighth of an ounce. Again, there's a range, because some weed is fluffier and some is more packed together, but in general you can consider an eighth to be a decent pocketful, or enough to fill the bottom of a standard plastic sandwich bag.

Eighth of weed price: How much does an eighth cost?

In states where marijuana is still illegal, dealer prices for an eighth can be somewhat unpredictable, depending on availability, risk and demand. Where the weed industry operates legally, things are more stable, though still variable.

Quality, of course, is the surest indicator of price. Top-shelf strains can fetch $60 or even $70 per eighth after taxes, though many would consider this too expensive. According to analysis by Perfect Price, for instance, the average price of a full ounce in Oregon is $214, which puts an eighth at $26.75. California, with an average ounce price of $299, offers average eighths at $37.38 — more likely, you'll pay an even $40. Of course, dispensaries also love to attract repeat business with deals, so you might run across a two-for-one special. Other sellers advertise a "cap," meaning they will not charge more than that amount for an eighth. If you see a place with a $35 cap, that's a guarantee that their best weed costs $35 an eighth.

Eighth of weed slang: What else is an eighth called?

The term "eighth" is fairly universal, especially where weed is sold legally, but people disposed to working with larger amounts may also say "half quarter." On the black market, you'll occasionally hear terms like "a slice" (because a slice of pizza is usually an eighth of the pie — get it?) and "a cut." But by and large, "an eighth" is one of the most universally understood concepts in a weed culture that is more typically overrun with differences of slang.

How long will an eighth of weed last?

This is perhaps the most important (and by far most subjective) question that people face in managing weed quantities. An eighth is considered an ideal unit in part because it's affordable, but also because you're unlikely to smoke it all at once. That said, people have certainly rolled an entire eighth into a single blunt, whether for a group of friends or just to see if they could.

By another anecdotal estimation, an eighth is perfect "for 2-4 people lasting about a weekend rolling gram blunts." And if you're using a bong or bowl, those typically fit somewhere in the range of half a gram or less per use, which means an eighth could pack it eight to 10 times over.

As always, your preferred method and rate of smoking makes a difference. For light smokers who bring out a one-hitter now and then, an eighth can easily last two weeks; habitual joint-smokers could burn through an eighth in just a couple of days.

At any rate, it's the perfect amount for a first-timer to buy. Sure, you could play it safe with just a gram — but since you're gonna like it, you may as well save yourself that second visit to the weed store.

This article was originally published on Jan. 17, 2017