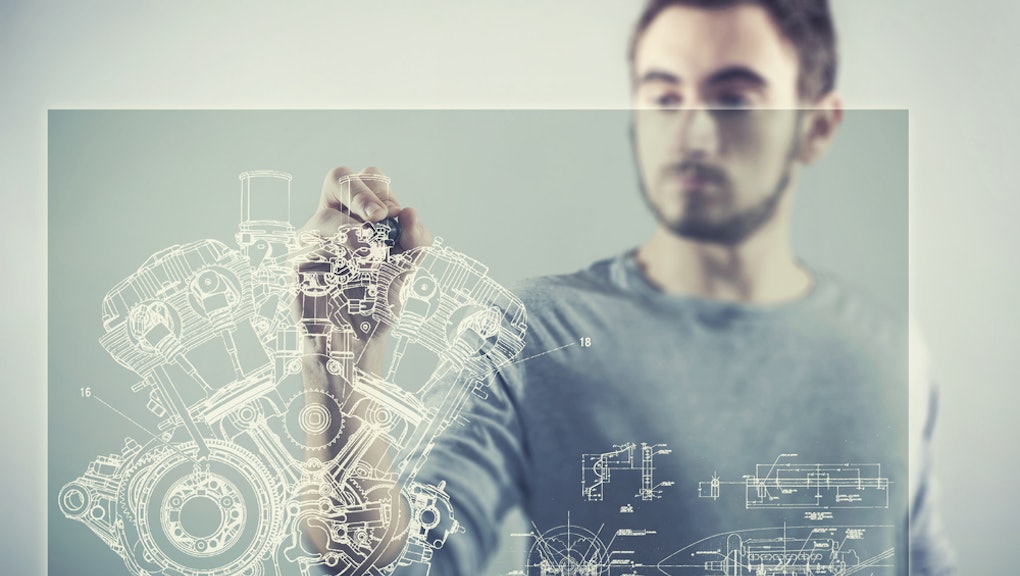 Manufacturing is still the industrial backbone of the American economy, contributing $2.17 trillion in 2015 and representing 12.1% of the gross domestic product. As new technologies continue to drive the industry’s growth, some 3.5 million manufacturing jobs will likely open over the next decade, according to a recent report. Yet two million of them will likely go unfilled due to an education and skills gap — an indication of how much manufacturing has evolved beyond our 20th-Century notions of unskilled assembly-line work.

While science fiction and technophobes envision a dystopian destiny in which artificial intelligence does our thinking for us and robots take our jobs, the future of manufacturing that's already coming into focus is one where highly-educated people are the real power behind the machines.

Whatever image you have about the industry, these futuristic jobs will make you rethink manufacturing entirely.

Of course, you know about 3D printing, but we're not talking about rendering your own Yoda head. 3D printing is becoming a key link in the production chain in industries like aerospace, defense, automotive and health care. A 2014 study found that 11% of manufacturing companies have already switched to production of 3D printed parts and products.

In the aerospace industry, for instance, to test a prototype part for an engine, engineers would have to create brand new tooling for each prototype. The process could take up to 6 months and cost hundreds of thousands of dollars. With 3D printing technology, engineers can create multiple patterns and variations for testing in a matter of days and at a fraction of the cost.

Automation and digitization is a growth strategy to bring more value to customers and improve competitiveness. An artificial intelligence architect figures out how to apply computing power to the manufacturing process to save production time and money. By leveraging a network of data from supply chains, design teams, production line sensors and quality control, AI can create a smart factory that integrates Big Data and sensors to manage inventory, automatically order replacement parts or instantly catch and correct production defects. And with the market for smart manufacturing tools expected to hit $250 billion by 2018, artificial intelligence architects will be in serious demand.

Human-Robot Interaction (HRI) is about designing, programming and maintaining robotic systems that do a range of functions like arc welding, material handling and assembly line.

HRI is going to power thousands of jobs across the manufacturing sector in the upcoming years, and also find applications in tourism, food service, retail, health care, automotive transport and construction. With robots literally doing the heavy lifting and more dangerous tasks alongside their human coworkers, production lines are more efficient, cost effective and safer.

Aside from being the job title you've always wanted, a garbage designer is more than just a next-gen recycling expert. Garbage designers are solution architects for addressing the challenge of climate change and sustainability. Garbage designers find creative ways to upcycle and repurpose the waste of one product to create a completely different one, like using steel scrap leftover from auto manufacturing to make steel beams for use in construction.

Material scientists work with metals, like titanium, nickel and aluminum, and synthetic polymers, like plastics and elastomers, to develop lighter, more durable components for manufacturing. Think Teflon, Kevlar, fiberglass, polyester, nylon and new kinds of alloys that will be used to make the cars, airplanes, jet engines and buildings of the future. Arconic materials scientists have developed advanced thermal coatings that help aircraft engine parts operate in an environment where the temperatures are higher than the melting point of the base metal.

Is there nothing augmented and virtual reality won't revolutionize? Used in manufacturing, AR — which digitally overlays graphic elements on your field of vision — and VR — which creates an immersive, computer-generated 3D environment that can be explored, interacted with and manipulated — enable engineers to simulate production processes or assembly line configurations. This can help workers identify potential hazards and fine tune workflow before production. Some automotive manufacturers have reduced worker injuries by 70%, according to TestDrivenTV. And VR can collapse a month-long process of “running the numbers” into a simulated interaction where design flaws can be spotted instantaneously.

You are the future. Psychologist and physician George W. Crane once said, “There is no future in any job. The future lies in the [person] who holds the job.” So when we think about artificial intelligence and robotics and wonder about our place in an increasingly mechanized workforce, remember that behind every machine is a human being with the education and training that makes her essential.