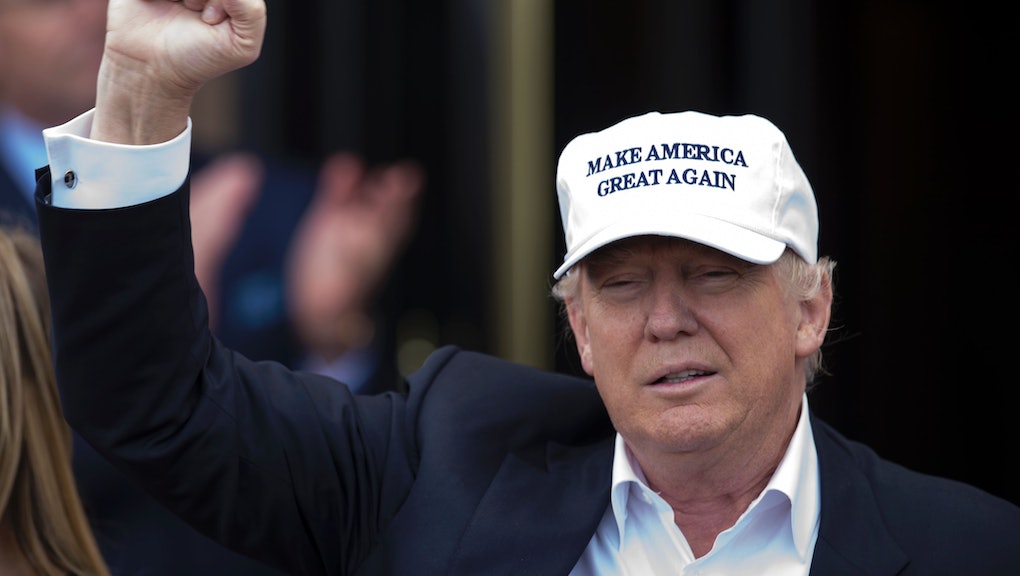 Michael Gove is one of the most influential figures in British politics, but most Americans have never heard of him. A conservative member of Parliament since 2005, he served as secretary of education under former Prime Minister David Cameron and was a vocal campaigner for Brexit, the June referendum in which British citizens voted to leave the European Union. Gove is known for being smart but lacking the eccentric charisma of politicians like Foreign Secretary Boris Johnson or Nigel Farage, the leader of the U.K. Independence Party.

But Gove made headlines across the Atlantic Sunday, when the Times of London published an interview between the MP and President-elect Donald Trump. In the interview — the first Trump granted to a media outlet in the U.K. — Trump praised Brexit and cast doubt over the U.S.'s commitment to NATO.

Mic spoke with Gove after his conversation with the president elect about that interview and the parallels between Brexit and the rise of Trump. Gove said that he left Trump Tower with a deep appreciation for Donald Trump. "I think it's important that we don't say that Trump is a buffoon or an idiot outright," Gove said. "Some of his views may be offensive and others may be very difficult to defend, but he is a smart operator."

The following interview has been edited for clarity and length.

Mic: What surprised you most about your conversation with Trump?

Michael Gove: When I asked him about Syria, he was critical of [Russian President Vladimir] Putin and [Syrian President Bashar Hafez al-]Assad. A lot of people have assumed there's a budding bromance between Trump and Putin. In the interview, he did say he would give Putin the benefit of the doubt, and that he wants to do a deal with him. But he also said he thought Aleppo was a terrible humanitarian situation. I don't know whether that came from the heart, but it showed that even though he often appears to be shooting from the hip, he is a more sophisticated media operator than a lot of his critics give him credit for.

Trump's election left the American political establishment dumbfounded. How would you describe his appeal?

MG: Trump is an amazing personality. If you're a politician, he breaks all the rules you're supposed to follow. He behaves on Twitter like the guy in the bar who can't stop getting into scraps. He ascribes to the idea that if you get hit, hit back harder. Most of us would have thought that approach is not consistent with the dignity of being commander in chief and leader of the free world. But clearly the American people were in the mood for a different type of candidate.

Remember, Trump is not a conventional conservative. He says he is a pragmatist and a deal-maker. He looks at things through the prism of business. He's someone who can be influenced by decent arguments. There are people like Peter Thiel who clearly saw something in Trump. I'm not asking anyone to be an uncritical admirer of Trump, because I'm not. But I think it's important to look at some of the opportunities as he takes office and not just the many perils.

Trump, who won in part by promising to clamp down on illegal immigration, said the Syrian migrant crisis — and concerns over immigration more generally — propelled Brits to support Brexit. Do you agree?

MG: Trump misinterprets some of the reasons Brexit occurred: He overattributes the impact of migration on the debate and underappreciates economic factors and sovereignty issues that were just as important, if not more important.

But whatever the merits of his reasoning, Trump clearly has an affection for Britain. He likes the direction Britain is headed. He feels a sense of ownership over the vote and therefore wants it to be a success. In the campaign, he said that his victory was going to be Brexit plus plus plus.

Was Trump's election Brexit plus plus plus? What are the parallels?

MG: One of the similarities is that, ever since the economic crash in 2008, wages have been stagnant in the U.S. and the standard of living has not been improving for a significant sector of the population. Some of the things that President Barack Obama did actually made the situation better economically, but the scale of the problem in 2008 was such that a section of the population felt they had been locked out of the American dream.

Both working-class people in Britain and middle-class people in America have felt their country isn't working for them. In Britain, there are a group of people that are in a similar economic situation. They were the swing voters. Brexit was partly driven by the feelings of those people who consider themselves to be economically locked out. But it was also driven by the fact that Britain has always had an ambivalent relationship with Europe, and the EU's recent handling of the economy and the migration crisis has exacerbated the feeling that the EU is not being run in the interest of the U.K. You had a perfect storm where economic unhappiness combined with the poor performance of the EU meant that Britain had a chance to break free.

MG: Yes, and it poses problems for both countries. The Trump vote and the Brexit vote revealed divisions of temperament, emphasis and attitude in the countries. The majority of millennial voters voted to remain, but more millennials voted to leave the EU than voted for Trump.

There are things Trump has said, in particular about women, that are completely out of sync with the values of most millennials. But Trump has also shown that he understands the communications and digital environment that millennials live in — far better than many politicians who are closer to them in age.

Prime Minister Theresa May has been criticized for lacking transparency in her handling of Brexit. Is that fair?

MG: If a politician plays his or her cards close to their chest, it's fashionable to want to pry those cards out of their hand. And if you can't do so, it's natural to say they don't know what they are doing. When she has decided not to say too much, that's probably because she is following good advice and her own good instincts about how to approach a negotiation.

Theresa played her cards close to her chest during the whole referendum, and now she's the prime minister. She's a cool customer. I think the likelihood is that she will get a very good deal done. She certainly deserves the benefit of the doubt and to be cut a degree of slack because she has access to information that the rest of us don't.

Are there fractures between you and Theresa May on immigration?

MG: I wouldn't say there are fractures. But there is a difference of emphasis. Theresa would probably want fewer people to come here, but we are both guided by similar principles: Does the policy make Britain succeed economically? Are we genuinely welcoming talent? Do we have space to look after those who are truly suffering?

I think that the most important thing is to have a color-blind, nondiscriminatory immigration policy. Whether you come from Bulgaria or Bangladesh, you should be treated the same way. I believe we need an immigration policy that welcomes talent and ensures refugees and people fleeing persecution can come here as well. If we have control of the numbers, people will be much more generous than if they feel they are being overwhelmed and they don't have control.

In your interview, Trump repeated his view that the U.S.'s involvement with NATO is outdated. Isn't this kind of talk exactly what Putin wants?

MG: Yes, exactly. I think NATO has been a cornerstone of peace and security since the Second World War. When Trump first said on the campaign that NATO is obsolete, that was a very bad sign. But after having met him and listened to him, I take a slightly different view: One of the reasons Trump said NATO was obsolete is it doesn't focus on Islamist terror and because other countries aren't pulling their own weight. So he seems to think NATO is a good thing, but that it's been configured in the wrong way. That does create an opportunity for Putin to make mischief, but Trump's real feelings are more nuanced than his campaign record might suggest.

MG: At the end of it, we'll have a free-trade relationship between Britain and Europe — similar but better to the one Canada has. We'll have tariff-free access for British goods. Britain will continue to play a big role — if not a bigger role — in NATO and the defense of the West. The city of London will still be the major financial center for Europe and in a stronger position than ever. Britain will still be the tech capital of Europe, with Berlin a distant, but attractive, second. Britain will be a more self-confident country.

In leaving the EU, Britain is not turning in on itself. It is embracing new opportunities. If we're going to make the most of these, we'll need people who take a liberal and internationalist view — many of whom voted for remain — to also play their full part. My hope is that even people who think this is the wrong outcome will try to shape the debate.