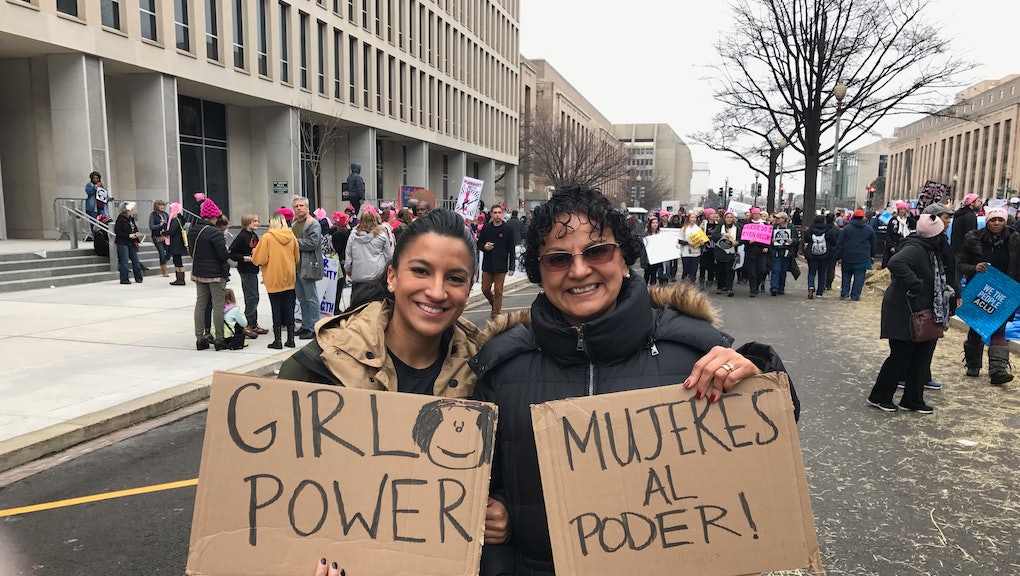 Women explain #WhyIMarch at the Women's March on Washington

WASHINGTON — An estimated 500,000 people from all over the United States assembled on Saturday for the Women's March on Washington, a peaceful demonstration to promote human rights one day after President Donald Trump's inauguration.

While the co-chairs were adamant that the march would not be anti-Trump, his presidential campaign espoused a number of issues the march aimed to combat: xenophobia, racism, sexism and disharmony between people of different backgrounds, to name a few.

While speculation that the march would be divided by the sheer volume of causes it championed — women's rights, but more broadly, immigrants' rights, racial equality, reproductive rights, income equality, LGBTQ rights, to name a few — its intersectional message seemed to resonate with the majority of those in attendance. Still, having mobilized probable thousands of first-time activists incensed by the outcome of the presidential election, the march's anti-Trump undertones were not easily shaken. Many of those who showed up on Saturday came with pointed messages for our new president.

Mic hit the streets of Washington to ask the women of the Women's March what spurred them to join the demonstration. Here's what they had to say.

Julianne Malveaux, an economist, author and former president of Bennett College in Greensboro, North Carolina, spoke to the importance of maintaining an intersectional balance.

Alyssa Skinner, 24, an app designer and founder of the Smear Campaign, a cosmetics line that raises awarenes for women's rights and bodily autonomy, said she's marching for history.

"Fear has always kept that back," Skinner continued. "And I mean, if my company believes in women’s rights, then I need to be here. This is where we’re making our voices heard. So I was not gonna let fear hold me back. … I have to be there. I want to be a part of this. I want, in 10 years, to tell my kids, Hey, you know, in 2017, I was in that Women’s March."

Roberte Exantus, living in Washington, D.C., since 2007, came to the U.S. from Haiti to attend college.

Barb, 33, a social worker from Williamsport, Pennsylvaia, who requested to be identified be her first name only, said she was marching for more than herself, but her patients.

"I work in a very underserved population in a primary care setting, so I work with people struggling with addiction, mental health, children that are hungry, so I’m here for them today."

Mother/daughter duo Aura and Stephanie Valarezo of Arlington, Virginia, said their reason for marching was a confluence of issues.

"There are so many reasons why we need to be marching today," Aura said on Saturday. "Because so many things that we've [achieved], just in one minute disappear. We're marching for the little things and then big things that we need to keep fighting for. Especially because this humanity is one. When you just consider humanity as one, we move forward. When we keep seeing humanity as fractions, we go back."

Stephanie said it was a matter of making their voices heard.

"I think we've progressed a lot in this country, and I think we still don't have equal rights for women, whether it's equal pay or any right really. So we need to continue to keep voicing our opinions and make sure that we're heard."

Sherry Armstong expressed disappointment at the degree to which she felt the new administration was turning back the clocks.

“I’m marching today because when I was younger, all this was settled," Armstrong, a secretary and treasurer at her local church, said. "We had it settled. Women were getting more and more rights, more and more equal in the workplace, and now it’s going backwards."

"I have three daughters and one granddaughter, and this is the world they have to face, and it’s awful. So I am here representing my children, my soon-to-be grandchildren, all my nieces and nephews, because they deserve the world that I had when I was coming of age."

Martina Morgan, 53, came to the march with her daughter Megan.

"We're down here to resist Trump and his outrageousness," Martina said. "We don't like pussy-grabbers, and we're taking a stand today for women's rights."

Catherine Boch, 68, said she wants to see U.S. politics take a more policy-oriented focus as in her native Sweden.

"I’m here because the people have to take over, because we have a president who is not competent," Boch said. "And I think I feel stronger about it than I would if I hadn’t just become an American citizen from Sweden, where … politics are about issues and not about people and scandals and sex."

Mujesira Dudic moved to Washington from Bosnia and Herzogovinia in 2000 as a refugee of the genocide. Today she's works in IT finance and sales and serves on the board of Becky's Fund, a nonprofit that fights domestic violence.

"I’m a product of a family of four daughters, one of them, my younger sister, being here," Dudic said on Saturday before the march. "So as I walk as a Muslim woman, I’m also aware that I walk as a white woman versus my black girlfriends who have a multitude of other issues [to deal with]. And I think it’s important to be aware of that and also make a conscious effort to look around yourself at women who represent the burden of being a woman in a multitude of ways."

"I’m excited to march today to basically show solidarity in all the different issues that I think affect women, really taking them back, being assertive" Lee said Saturday morning, roughly an hour before the march began. "A big issue that we often talk about within the area of domestic violence is that women’s issues, women’s rights, are human rights and everyone has the right to live a life free of domestic violence."

Melissa Toogood, 35, is a dancer who attended the march with her husband, Kenneth E. Parris III, a visual artist. An immigrant from Australia, Toogood was not able to vote in the 2016 election, but said its outcome left her more motivated to become a citizen. Toogood was marching for "a woman's right to choose," immigrants' rights and for her father-in-law, a veteran.

"We’re also marching just as a way to be with people and just start a little bit of healing," she added in an interview conducted on a charter bus from Manhattan to Washington D.C. on Friday. "I think part of marching is also to be part of the conversation, to educate ourselves on more action that we can take beyond just voting."

Jackie Moline is a 54-year-old physician specializing in occupational and environmental medicine. She attended the march with her daughter, and in an interview conducted en route from Manhattan to Washington, D.C. on Friday, she explained the necessity of shattering the idea of an "ideal American."

"I’m going to the March to say that we all matter," she added.