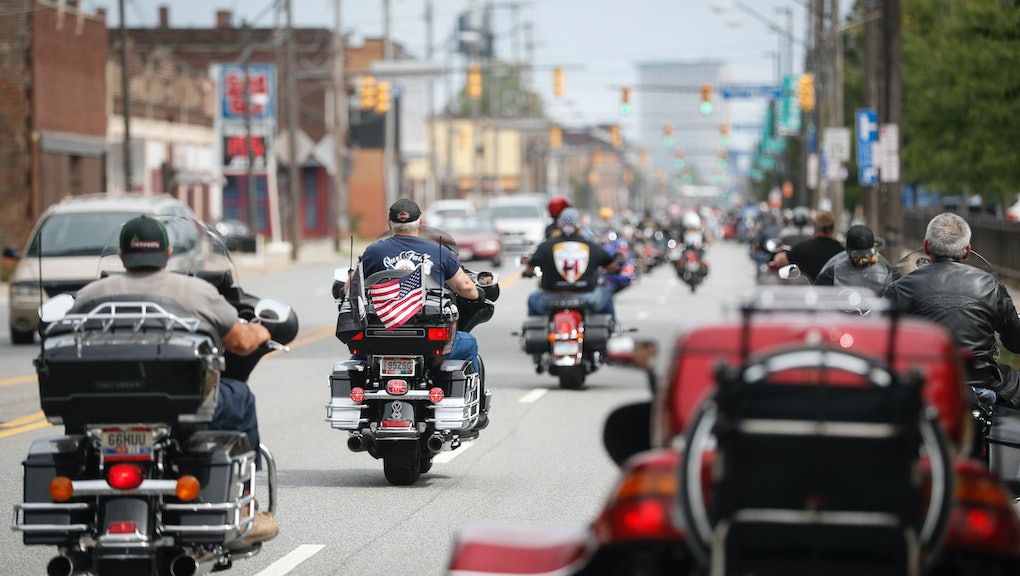 Social media accounts in support of President-elect Donald Trump are circulating false images of Trump supporters heading to the Jan. 20 inauguration in Washington, D.C. using the hashtag #BikersForTrump. It all stems from a tweet sent by Trump on Tuesday saying that a group of his supporters, Bikers for Trump, were on their way to his inauguration.

"People are pouring into Washington in record numbers. Bikers for Trump are on their way. It will be a great Thursday, Friday and Saturday!" Trump's tweet reads.

Bikers for Trump intend to go to the nation's capital. The group's founder, Chris Cox, told Fox & Friends that the 5,000-plus bikers attending plan to form a "wall of meat" against Trump protesters. BuzzFeed reports that the permit for 5,000 bikers to congregate at John Marshall Park on Inauguration Day has yet to be issued.

But that has not stopped people from sharing images of group members supposedly making its way to the inauguration.

One common image circulating Twitter is of a group of bikers with an American flag in the backdrop, which is actually a Rolling Thunder stock photo from May 2009 taken at the annual Rolling Thunder rally, Ride For Freedom, in Washington D.C.

Another image shows a large number of bikers in a parking lot. BuzzFeed reports the photo is from 2013 of the 2 Million Bikers to DC event on the anniversary of 9/11.

In some cases, social media users are spreading the news that 200,000 bikers are on their way, as in the tweet below, despite Cox having said 5,000 bikers will show up. The image accompanying the tweet, according to Snopes, is unrelated to Trump's inauguration. Instead, it was published on a blog in 2013 about how to ride safely in large groups.