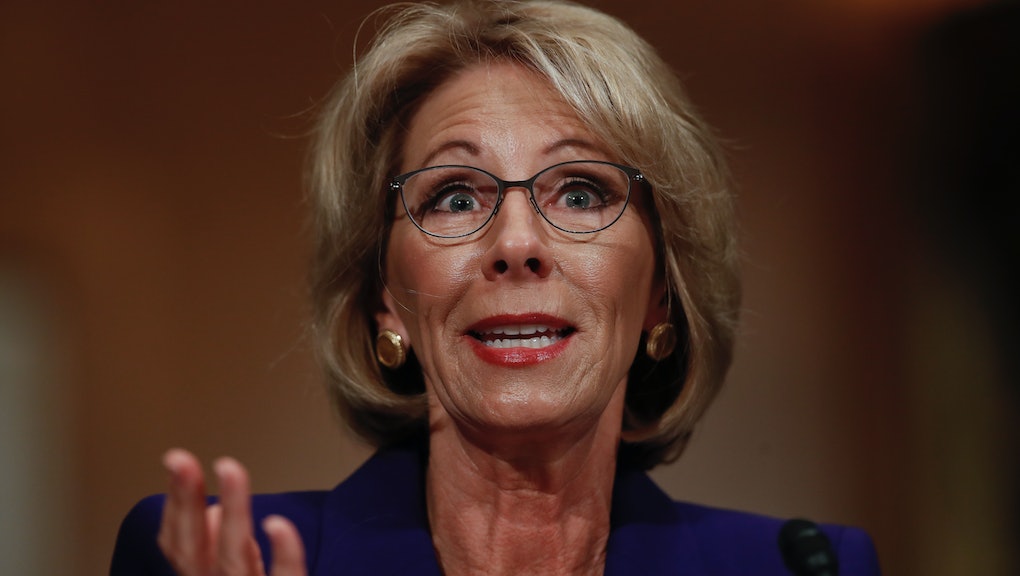 Betsy DeVos "never believed" in conversion therapy, but donated millions to organizations that do

Betsy DeVos, Donald Trump's choice for secretary of education and avid anti-grizzly bear advocate, failed to explain away her millions of donations to anti-LGBTQ organizations on Tuesday.

During the confirmation hearings, Minnesota Sen. Al Franken asked DeVos about her "long history" of supporting anti-LGBTQ organizations, like Focus on the Family, that encourage conversion therapy, with cold-hard cash.

Franken schooled the education nominee on conversion therapy, which has no mainstream support from the medical or mental health industries.

"It has been shown to lead to depression, anxiety, drug use, homelessness, and suicide, particularly in LGBT youth," Franken said. "In fact, many of the leaders and founders of conversion therapy, including both religious ministries and mental health professionals, have not only publicly renounced it but have issued formal apologies for their work and how harmful it has been to the individuals involved."

He then asked Devos if she believed in the harmful practice.

"Senator Franken, I’ve never believed in that," DeVos answered. "First of all, let me say I fully embrace equality and I believe in the innate value of every single human being and that all students, no matter their age, should be able to attend a school and feel safe and be free of discrimination. So let’s start there and let me just say that your characterization of our contributions I don’t think accurately reflects those of my family. I would hope you wouldn’t include other family members beyond my core family."

Though DeVos claims she doesn't believe in the harmful practice, her actions contradict her words. Mother Jones previously reported that the DeVos family were among the largest donors to the right-wing groups that advocate for conversion therapy.

During her testimony, DeVos also claimed that she was not involved in her mother's foundation, which donated millions to Focus on the Family. Tax returns listed DeVos as a vice president of the organization for over a decade; DeVos called that a "clinical error."