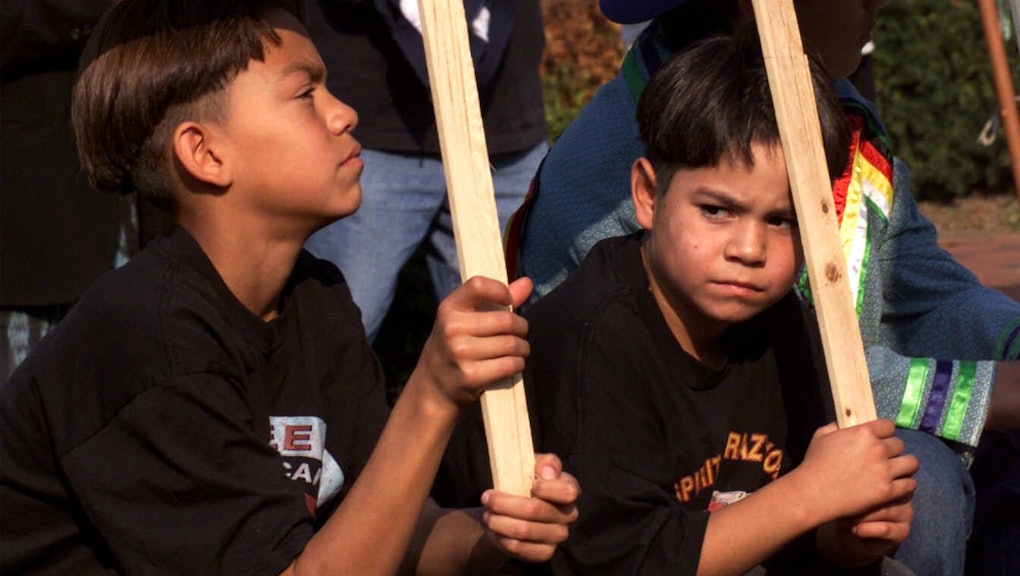 (Editor's Note: On Jan. 18, the Office of the Pardon Attorney announced that President Obama has denied clemency to Leonard Peltier.)

President Barack Obama commuted the prison sentences of 209 federal inmates on Tuesday, including that of Chelsea Manning, the United States Army analyst who leaked documents in 2010 exposing American military and diplomatic activities around the world.

Now, with two days left in his presidency, Obama has the chance to close one of the more troubling chapters in the history of U.S. government-Native American relations: the saga of Leonard Peltier. By commuting Peltier's two consecutive life sentences, the president will have the final word on a case that's stained federal law enforcement for decades.

Leonard Peltier, 72, has been in federal prison since 1977. At the time of his arrest, trial and conviction, he was a member of the American Indian Movement, a political organization dedicated to combating poverty and inequality in Native American neighborhoods and reservations. Native American activists have argued for decades that Peltier's conviction for a double-homicide was a vast miscarriage of justice, and resulted from a case rife with law enforcement misconduct.

"Many people — including judges, prison guards and legal experts — have agreed that his trial was unfair and corrupt," wrote Peltier's daughter, Kathy Peltier, in a blog post for Amnesty International in 2016. "He missed so much of my life, important moments like graduations, and I had to remember he wasn’t missing these moments because he wanted to — he had no choice. My worst fear is that he will die in prison and I won’t have any real time with him."

On June 26, 1975, Peltier was present during a shootout at the Pine Ridge Indian Reservation in South Dakota that ended with the execution-style murders of two FBI agents, Ronald Williams and Jack Coler. Peltier maintains that he is innocent of both killings. Two other suspects — Robert Robideau and Darrelle "Dino" Butler, both AIM members — were originally charged and tried, but both were acquitted, at which point federal authorities focused their efforts on arresting Peltier, who had fled to Canada.

The FBI succeeded in extraditing Peltier to the U.S. in 1976. But the documents they used to secure his extradition had serious inconsistencies. One of the most incriminating was an affidavit signed by Myrtle Poor Bear, a local Pine Ridge woman with a history of mental illness, who claimed she was Peltier's girlfriend at the time of the shootout and witnessed him killing the FBI agents.

After Peltier's arrest, however, Poor Bear retracted her testimony. She later confessed she'd been pressured and threatened by FBI agents into signing the affidavit. Poor Bear was not called as a prosecution witness at Peltier's trial, but the judge also blocked her from testifying for the defense, claiming that her testimony "could be highly prejudicial to the government," according to Amnesty International USA. Peltier maintained the whole time that he did not know Poor Bear.

Peltier was eventually convicted for the two murders in the absence of any forensic evidence. There were multiple AR-15 rifles — the alleged murder weapon — present at the time of the shooting, but no evidence showing that the one which fired the fatal shots belonged to Peltier. Several other people who testified for the prosecution also recanted their testimonies later on.

Nevertheless, Peltier was given two life sentences. He escaped prison in Lompoc, California, for a few days in 1979, but was recaptured soon after, and is now serving the rest of his time in Florida.

Peltier brought his case before an appeals court in 1986, but his call for a retrial was denied. He has also been repeatedly denied parole on the basis that he refuses to profess his guilt, even though, after one hearing, the U.S. Parole Commission admitted that "the prosecution has conceded the lack of any direct evidence that you personally participated in the executions of two FBI agents."

On Tuesday, former U.S. Attorney James Reynolds, a former prosecutor who oversaw key parts of Peltier's appeal, wrote a letter to the Chicago Tribune calling for clemency for the aging activist.

"It was a very thin case that likely would not be upheld by courts today," Reynolds wrote. "It is a gross overstatement to label Peltier a 'cold-blooded murderer' on the basis of the minimal proof that survived the appeals in his case."

Reynolds is not alone in his advocacy, joining countless Native Americans, Standing Rock Sioux Tribe Chairman Dave Archambault, Archbishop Desmond Tutu, Nelson Mandela and over 50 members of Congress who have at different points called for Peltier's release. Some of them have cited the FBI's long-running covert war against the American Indian Movement in the 1960s and 1970s, which included mass surveillance, infiltration, harassment, intimidation and incarceration of the group's members. But their efforts have been dogged by a forceful law enforcement-led resistance campaign. When President Bill Clinton was being pressured to grant clemency to Peltier in 2000, more than 500 FBI agents marched outside the White Houe in protest.

If Obama demurs this time around, it is likely that Leonard Peltier will die in prison. Peltier is 72, suffers from diabetes and has an abdominal aortic aneurysm, an enlargement of the aorta blood vessel that could be fatal if it bursts. He has already served more than 40 years in prison for a crime he may very well have not committed. And his next chance at clemency is President-elect Donald Trump, who is both a firm and uncritical supporter of law enforcement and a noted bigot against Native Americans.

The answer to whether Obama will release Peltier or not will have to come before Jan. 20, when Trump takes the oath of office. The clock is ticking on Peltier's freedom, and with it, the hopes of his global network of supporters and the already-debatable legitimacy of the American criminal justice system.