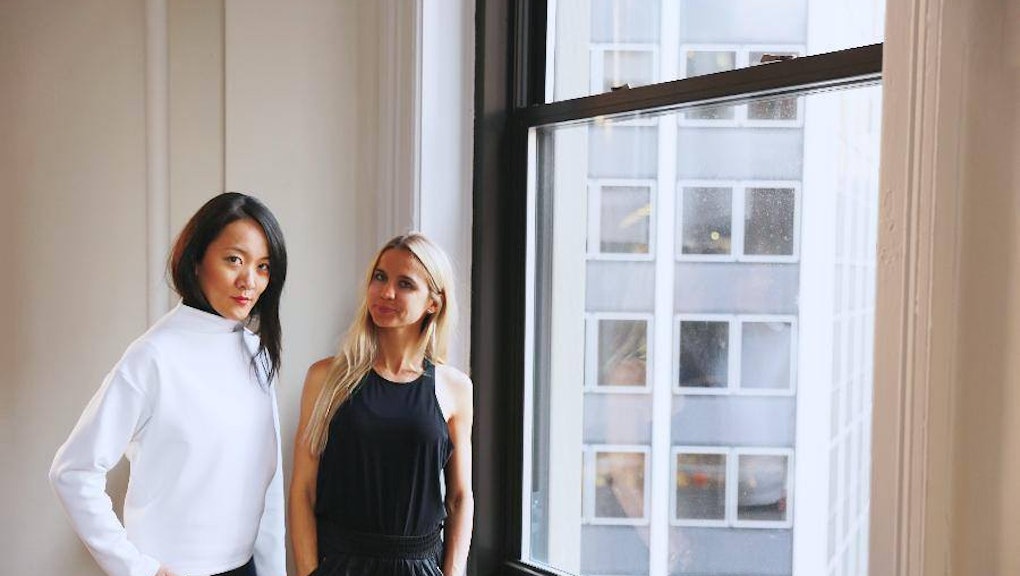 These fashion entrepreneurs are stretching activewear beyond yoga pants

Everything these days is in constant motion — our cars, our plans, our fashion. Our schedules consist of racing against the clock to finish work so we can zoom through errands and still have time to be social. And the fashion industry has kept up with our rapid pace, quickly churning out new styles and convincing us we need new clothes every season and a new wardrobe every year.

According to 2016 study, the amount of clothing produced doubled from 2000 to 2014, exceeding 100 billion garments for the first time in 2014. What used to be four seasons of fashion has now increased to up to 15 production cycles per year, Tasha Lewis, a professor at Cornell University’s Department of Fiber Science and Apparel Design, told NPR in 2016. These clothes are more disposable than rewearable, wreaking havoc on the environment and economy.

The core mission, said Faulhaber, is to help people go from "consuming things to more consuming experiences." By providing capsule clothing made of fabric that’s as high-performance as the people who wear it, the clothes are meant to outlive all seasons in both quality and style while simplifying one’s wardrobe.

"The few things that people buy need to do better and need to do more [for] them," Faulhaber said.

Growing up in Germany, Faulhaber was a gymnast and spent a lot of time out and about in activewear. After working in finance, Faulhaber and He entered the venture capital world funding tech entrepreneurship. Although the two saw "a lot of people doing cool stuff," they felt it was limited to just creating apps. The fact that no one had really innovated in the clothing space for a long time is what inspired ADAY's birth.

Faulhaber and He decided to take the "best of the world of yoga pants" — including their comfort, versatility and breathability — and "design them in a way that they wouldn’t look like yoga pants [but more] like your normal wardrobe." All of ADAY’s products are made with moisture-wicking, breathable, even UV-resistant fabric. To push the sustainable and longevity aspect further, each item is "machine cold wash" to save energy from hot washing.

The company is also experimenting with using recycled products. This month, they’re launching a jacket made of recycled water bottles. It’s all part of "creating stuff that’s really long-lasting."

"The products are really important but equally the people who wear it," Faulhaber said. They need clothes that "enable [them] to then go out and do."

Robyn Berkley shares a similar sentiment. Like Faulhaber, Berkley grew up dancing and doing gymnastics before finding herself in a high-stress publicist position in New York by her late 20s. Around 2011, Berkley quit her hectic PR job and joined a yoga training program in Bali. While embracing her new, wellness-based lifestyle, she struggled to find proper clothes that "looked good and felt good" and moved like activewear, without a giant logo plastered over it.

In 2013, Berkley launched Live the Process, a content site that runs the health, wellness and nutrition gamut and is aimed at "impossibly busy, but balance-seeking people," according to its website. The site was meant to add a more introspective, experience-driven dimension to the clothing brand, which launched roughly six months later. The line was quickly snapped up by luxury retailers like Barneys and Net-a-Porter.

Live the Process is for those who live what Berkley called a "transitional lifestyle" and require clothes with the streamlined design of sportswear and the flexibility to seamlessly fit into their daily lives at the office or cocktail bar. She and her team spent a year and a half perfecting the company's high-waisted geometric leggings to become "timeless."

"I was really careful not to be too part of the whole activewear fad," Berkley said. Rather, "people these days want to rush and do things for money instead.[I want to] really empower them."