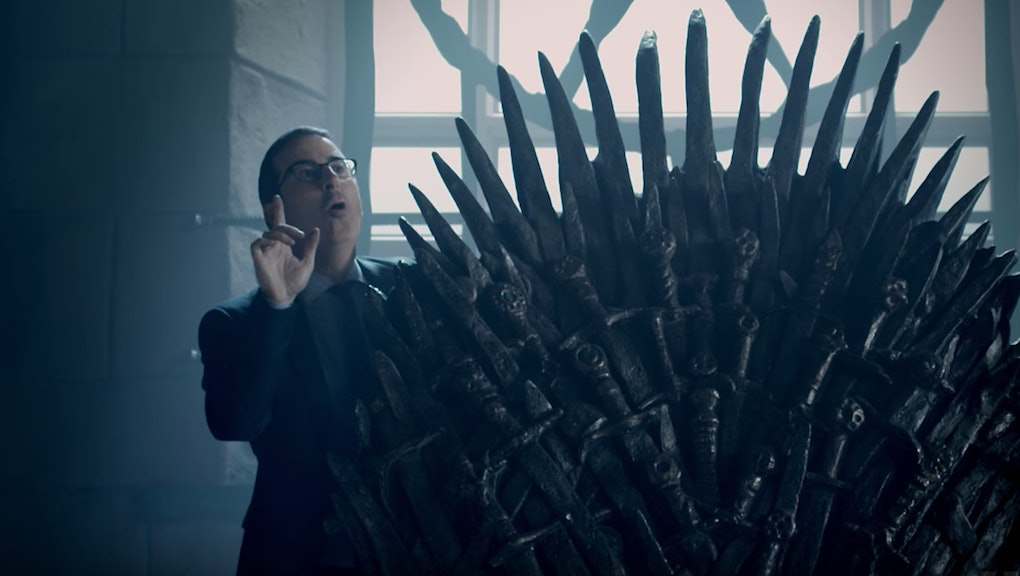 John Oliver tries to hype 'Last Week Tonight,' ends up promoting everything else on HBO

HBO is gearing up for a huge 2017, which will see the return of one of the network's biggest Sunday night programs. No, we're not talking about Game of Thrones. Not Silicon Valley. Not even the return of Curb Your Enthusiasm.

OK, so the marketing for Last Week Tonight needs a bit of work, as the teaser for season four has host John Oliver inadvertently hyping up every HBO show but his own. He hides behind the Iron Throne while the narrator talks about "HBO's biggest Sunday night show" — that'd be Game of Thrones — before also making the assumption that the network's "hit comedy" is his late-night series, rather than the Emmy-winning Silicon Valley.

"He said hit comedy," Silicon Valley star Kumail Nanjiani says in a cameo. "At best, you're an acquired taste."

"You have made your point," Oliver responds.

"Sometimes we don't want a British man yelling at us about how the world is ending for a whole hour," Nanjiani adds. Oliver corrects him by saying it's actually half an hour, but the actor says it never feels that way. Fair point.

Finally, Oliver assumes that the buzz surrounding an HBO show coming back from a long hiatus is his own, which is returning after a few months, when people are actually excited for a new season of Curb Your Enthusiasm, which hasn't come out in years. So yes, HBO has a lot of great stuff on TV — including a wholly original concept about a pope, but he's young. However, the Emmy-winning Last Week Tonight is right up there with them, even if, as the show's Twitter account teases, "you didn’t realize it was on hiatus."

For those who care, Last Week Tonight returns Sunday, Feb. 12 at 11 p.m. Eastern. You can check out the teaser below.