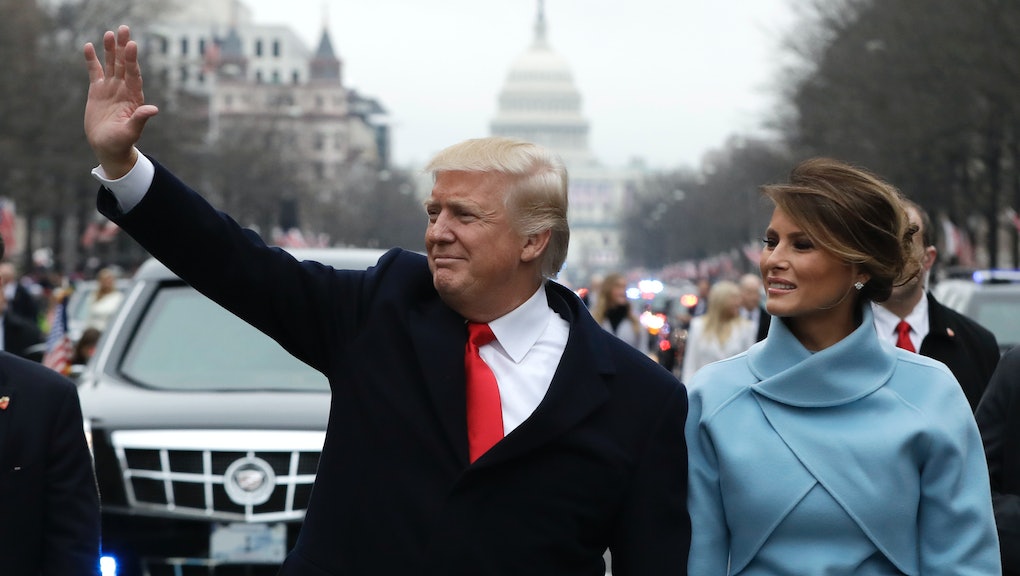 President Barack Obama, in his farewell speech on Jan. 10, promised a "peaceful transfer of power from one freely elected president to the next." Nevertheless, Trump's inauguration is shaping up to be a bumpy ride, with a third of congressional Democrats planning to boycott his swearing in and hundreds of thousands of protesters slated to march on Washington on Jan. 21.

Mic's reporters will be on the ground in Washington, D.C., throughout inauguration weekend. We'll keep you updated on the pomp and circumstance, politics and protests as they happen.

All times are Eastern.

6:09 p.m.: We are signing off for tonight. Updates will continue on this live blog starting Saturday at 9 a.m.

5:10 p.m.: James Mattis has been confirmed as Trump's secretary of defense

4:56 p.m.: Police are using pepper spray on protesters who are chanting, "Hands up! Don't shoot!"

4:15 p.m.: Trump, along with his family, walked briefly down the parade route

4:00 p.m.: Parade route sidelines are beginning to be cleared out

3:46 p.m.: Supporters line street as motorcade makes its way to the White House

3:37 p.m.: Inaugural parade begins, Trump family making their way from the Capitol to the White House

Trump acknowledged Hillary and Bill Clinton at luncheon, has audience stand and applaud for them.

2:21 p.m.: Police are using hoses on some protesters

Pepper spray and flash bangs are being used on protesters — some who were throwing rocks at police officers — ahead of the inaugural parade.

1:44 p.m.: The armed forces prepare for the inaugural parade

Mic's Celeste Katz reports from the side of the parade route:

Some of the crowds from the mall are assembling on both sides of Constitution Avenue for the inaugural parade. Members of the armed forces are standing at attention along the route. The crowd is patiently waiting behind barriers on both sides of the street and cheering departing members of the Secret Service.

The parade is slated to begin at 3 p.m.

The luncheon is held in Statuary Hall in the Capitol. The menu includes Maine lobster, Gulf shrimp and Virginia beef.

1:34 p.m.: Barack and Michelle Obama board plane for California

More than a thousand protesters marched on Washington's Union Station, as Donald Trump took the oath of office around noon on Friday. The demonstration moved into the train station, which has a view of Capitol Hill where the inaugural ceremony was taking place. Inside, protesters crowded past people waiting at Amtrak boarding gates and food stalls.

Michael Harris, 27, of Cleveland, came to Washington with a group from Ohio to voice his displeasure with Trump's election. "I'm pissed," he said. "I hate that man. But this is an opportunity to witness the resistance."

Harris, who is black, added, "I've never seen so many caucasians screaming 'Black Lives Matter.' I think we all need to join as one."

Trump, surrounded by his family and Republican leaders, signed orders.

"Michelle and I, we've really been milking this goodbye thing," he joked.

1:00 p.m.: Barack and Michelle Obama exit Marine One at Joint Base Andrews

12:41 p.m.: Barack and Michelle Obama board Marine One

The former president and first lady bid farewell to Donald and Melania Trump before boarding the helicopter. The Obamas will travel to Palm Springs, California, after the inauguration.

"I want to do some writing," Obama told reporters, according to the LA Times. "I want to be quiet a little bit and not hear myself talk so darn much. I want to spend precious time with my girls."

"I have recently been asked by the president-elect to perform the national anthem for the swearing-in ceremony at the inauguration," Evancho said in a Today show interview, according to Billboard. "I'm so excited. It's going to be awesome."

"We, the citizens of America, are now joined in a great national effort to rebuild our country and restore its promise for all of our people," Trump said at the start of his speech. "Together, we will determine the course of America and the world for many, many years to come."

Trump ended the address with his trademark promise: to "make America great again."

According to Gizmodo, his cover photo is from Barack Obama's inauguration in 2009.

The @FLOTUS account has been transferred from Michelle Obama to Melania Trump. Michelle Obama's tweets are now located at @MichelleObama.

12:00 p.m.: Donald Trump is now the president of the United States of America.

The crowd near the Capitol steps is making their feelings known about various American political dignitaries as the famous figures make their entrances.

President Jimmy Carter garnered only weak applause. And the Clintons received an even weaker reception. Inauguration guests laughed as Hillary Clinton, the Democratic presidential nominee Donald Trump defeated, was shown on the Jumbotron clapping along to the music. Michelle Obama and Jill Biden got zilch from the crowd, and President George W. Bush got a chuckle thanks to one of his signature smirks.

The excitement and camera lenses rose in tandem as Melania Trump and Karen Pence — the soon-to-be first and second ladies of the U.S. — finally emerged from the Capitol.

The crowd exchanged satisfied smiles and a few high-fives as Trump emerged stone-faced on the big screens — and laughed as he looked directly into the cameras, appearing on screen to be staring down the audience.

"We face threats foreign and domestic," Schumer said. "In such times, faith in our government, our institutions and even or country can erode. Despite these challenges, I stand here today confident in this great country for one reason: you, the American people."

11:40 a.m.: A large group of protesters marches down D Street

Protesters with the left-wing ANSWER (Act Now to Stop War and End Racism) Coalition said in interviews that they're having trouble reaching the site of their permitted demonstration along the Inauguration Day parade route.

Hundreds of protesters — up to perhaps 1,000 — were left to chant slogans at 7th and D Streets in Northwest Washington as they waited to pass into the Navy Memorial grounds for the protest.

"This is not what democracy looks like," said Emily, an ANSWER protester who declined to give her last name. "We've been here since 6 a.m."

The ANSWER Coalition secured a permit to protest at the Navy Memorial, within the security perimeter of the inaugural ceremony. But that means having to pass through a checkpoint.

The outgoing first lady and second lady arrived at the platform together.

On Twitter, some viewers said they were sad to say goodbye to Michelle Obama — while others tried to decode her facial expression.

In a Friday morning tweet, the former presidential candidate explained why she was attending Trump's inauguration.

Following tea in the White House, the soon-to-be 45th president made his way to Capitol Hill for the inauguration ceremony.

The incoming president and first lady and their departing counterparts left the White House after tea.

The Vermont senator, who lost the Democratic primary race to Hillary Clinton, arrived at the Capitol for the inauguration.

10:07 a.m.: Trade Justice coalition have begun to shut down another entrance

10:03 a.m: Protesters have refused to let Trump supporters through the red gate

David Turnbull, a spokesman for the coalition of protesters, said that the blockade has been in place for over an hour. He said some Trump supporters got aggressive and tried to force their way through the demonstrators, but that "it hasn't been too bad."

"We had to help clarify that they were going to need to go another route," Turnbull said of a few Trump supporters who tried to get physical.

9:49 a.m.: Protesters and Trump supporters are clashing at red gate entrance to the inauguration

Joe, a tie-dye-clad Trump supporter who says he came from Tampa, Florida, because "President Trump sent me an email," yelled at a man preaching through a speaker that he's "mentally ill." Joe told me he's pro-choice — but not from a women's rights perspective. "If abortion was illegal, we'd have 5,000 crack babies a year," he said. "Do we need 5,000 crack babies a year?"

9:05 a.m.: Congressional staffers are handing out free tickets to the inauguration

8:48 a.m.: Guests are moving quickly and easily through the Rayburn office building to inauguration

At the entrances for seats close to the Capitol, security lines moved swiftly as guests with green and teal tickets passed through the Rayburn office building and into the perimeter.

While the magnetometers were busy, there was little other security or direction provided and guests appeared to be able to move freely throughout the government office complex.

8:45 a.m.: Trump and his family have arrived for a church service before the inauguration

8:35 a.m.: Black Lives Matter protesters have chained themselves to gates of entrance

Mic is live at a Black Lives Matter inauguration protest.

"When black lives are under attack, what do we do?" a leader chanted.

"Stand up, fight back," the crowd responded.

Mic's Celeste Katz rode the train to Capitol South with these inauguration revelers:

"It all begins today!" the 45th president of the United States tweeted.

7:30 a.m.: Blockade at 6th and Indiana mostly clear, while other protests continue

Mic's Jack Smith IV reported that the blockade at 6th and Indiana is now clear. "Protesters dragged out instead of arrested," he wrote on Twitter.

Meanwhile, protests carried on elsewhere in D.C. — like this one, at Union Square:

Mic's Jack Smith IV is on the scene of a protest at a checkpoint at 6th and Indiana.

Secret Service said some security checkpoints "were experiencing power issues," according to WJLA.

WJLA reporter Suzanne Kennedy, reporting from the orange gate, tweeted that inauguration attendees were finally moving through the security checkpoint.

The inauguration security gates did not open at their scheduled time of 6 a.m.

According to WJLA reporter Sam Sweeney, a law enforcement official said at least one checkpoint did not have enough staffing to open:

Crowds gathered in the wee hours of the morning outside the security gates, which open at 6 a.m.