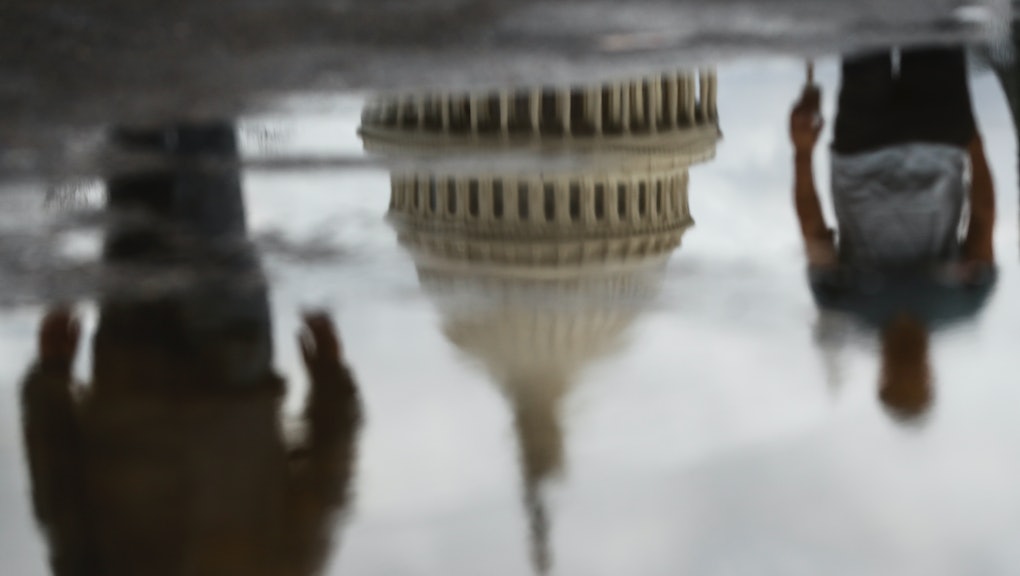 WASHINGTON — Donald Trump insists his inauguration will be truly huge — the biggest ever, in fact. "People are pouring into Washington in record numbers," he wrote on Twitter.

If that were the case — which early evidence suggests it isn't — his team might be a little understaffed.

About 8,000 volunteers are working the Trump inaugural, according to Ninio Fetalvo, a spokesman for the Presidential Inaugural Committee.

"We have approximately 8,000 volunteers — 1,500 of them doing special events and the rest assisting with the parade," Fetalvo said via text message. The volunteers come from all over the country, ranging from teenagers to the elderly.

The "special events" included a candlelight dinner for high-dollar donors, the inaugural balls and the National Prayer Service, he said.

Fetalvo could not provide information about how many volunteers had been assigned to work on the National Mall during Trump's swearing in.

While Trump has promised "record numbers," initial estimates suggest that's not the case. Reuters reported, "Officials expect about 800,000 spectators for the events — down from the estimated 1.8 million who flocked to Washington for Obama’s 2009 inauguration."

Turnout at the "Make America Great Again" welcome concert was estimated by MSNBC to be as low as 10,000.

Despite this,  Trump, frequently given to hyperbole, said Thursday night that "tens of thousands" of people had attended the Lincoln Memorial concert — adding, according Bloomberg reporter Jennifer Jacobs, "They never had as many people."

Stephen Kerrigan, the chief executive officer of the 2013 Presidential Inaugural Committee, who also worked on the 2009 inauguration, noted in an interview that more than 17,000 volunteers came out to help organize as Obama took the oath, versus the 8,000 claimed by Trump's inauguration organizers.

"We had, including the folks who went to our parade in '09, two and a quarter million people, and we needed all of those volunteers working," Kerrigan said, while watching footage of Trump's Thursday concert. "So I just think the pictures of the concert right now — if this is what they're calling a big crowd, it's underwhelming."

"He's the king of superlatives, so he's going to have the 'something-est' inaugural, but I don't think it's going to be the biggest," Kerrigan said.

A source familiar with current and past inaugural plans told Mic only a few hundred volunteers had been specifically assigned to Mall duty — a stark contrast with Obama's staffing levels.

According to records from the time shared with Mic, more than 2,000 volunteers were deployed to the Mall during Obama's second inauguration, with hundreds more directing foot traffic further from the Capitol.

"In 2009, they had the purple tunnel of doom," the source said, recalling the notorious logistical nightmare of the first Obama inaugural in which purple-ticket-holding guests got stuck in an underground passageway and missed out on the event.

"Thousands of people were down there and all hell broke loose, [and] all these people had a miserable experience," the source said, saying the screwup spurred an inquiry and bigger logistical response in 2013.

But those officers are meant to maintain peace, not necessarily direct guests to their destinations.

If one main entrance to Thursday's concert was any indication, some Friday attendees could be in for a long and pushy wait, even if the draw is lower than Obama's.

Some guests tried to flood through the gates at a security checkpoint, ignoring signage and held back by a single police officer and a woman in civilian clothing. One volunteer demanded access even as she tried to shield a heavily pregnant woman from being buffeted by the crowd.

Friday morning, an ABC News reporter tweeted that a security breakdown already appeared to be in progress, "saying inauguration gates not opening at 12th and E. Law enforcement official says they are not staffed enough to open."

Kerrigan prophesied problems that could stem from a lack of organization on the part of the Trump's inauguration committee. "Congress does a good job of helping onsite at the Capitol, but [they] could have a real issue if they don't have access control," he said.

That is the responsibility of the president's committee, not the Secret Service, he specified.

"They've said it a million times: They're not ticket checkers," Kerrigan said. "Secret Service control the area, [but] for the overall event, that's incumbent on the inaugural committee to designate who can go where with whatever type of ticket, and then, unless it impacts security, the Secret Service doesn't care, because that's not their drill."

The source who drew the contrast with staffing levels for the Obama and Trump administrations sneered that crowd control problems are "again a microcosm of the larger issues that are going to have this fucking administration."