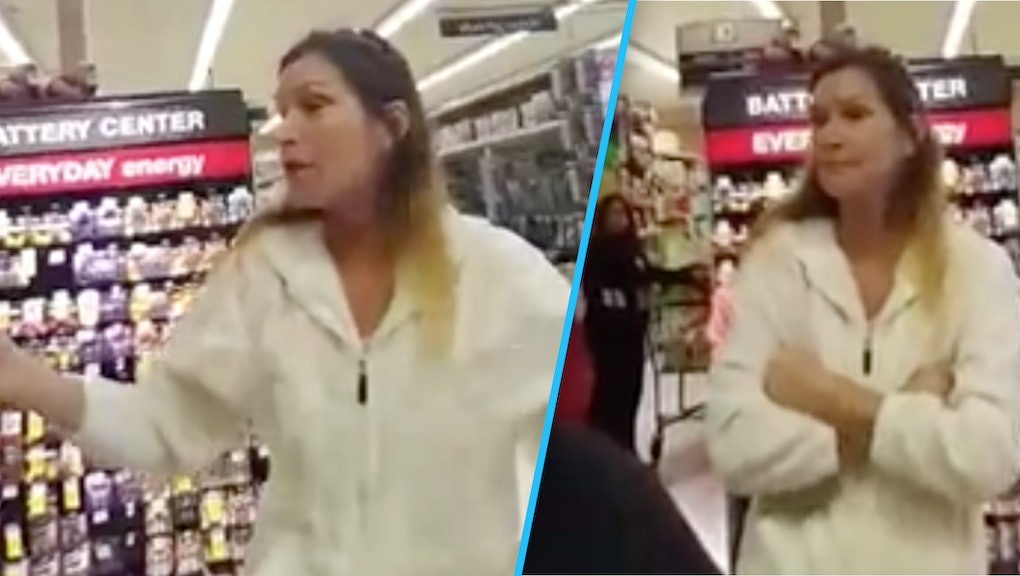 While shopping at an undisclosed grocery store in Los Angeles, Thanasi Papoulias was practicing Greek with his wife, according to the Pappas Post blog. Both Papoulias and his wife are Greek, born in America and speak fluent English. A woman overheard the two speaking in another language and them to "speak fucking English, this is America," Papoulias said.

According to Papoulias, the woman then began to cuss, using "every swear word to describe us and how we don't belong here." The video begins after that part of the confrontation and shows the woman telling Papoulias and his wife to speak English.

After the woman asks the couple to speak English, a store manager can be heard off-screen telling the woman to leave.

"That language is not allowed in the store," the manager said. "You need to go. You're not welcome here."

"Imagine if we were with our kids," Papoulias wrote in his Facebook post accompanying the video. "Huge props to the manager for kicking her xenophobic, racist ass out. I only caught the tail end on video, but you'll get the point."

Since the video was first posted Saturday, it has been shared over 1,600 times, garnered over 1,800 comments and viewed more than 522,000 times.

Papoulias expanded on what happened in a post titled "Bye Felecia" on his personal blog.

"She was shocked when I responded to her in perfect, American-accented English," he wrote. "But she didn’t stay quiet. Kept cursing, kept telling me this is America, blah blah blah."

Papoulias is not the only individual who's had to suffer through racism and xenophobia while trying to make a simple purchase. In December, Mic reported on a Kentucky woman who berated a Latina shopper in line in front of her at JCPenney, telling her to "go back" to her home country.

Aside from Papoulias' conversation being none of the woman's business, her demand that Papoulias and his wife speak English is inherently absurd, given the United States has no official language.

Since the incident, Papoulias has decided to show his gratitude toward the store manager who stepped in to defend him and his wife — by setting up a GoFundMe to send her to Greece. In two days, the fundraiser has met about one-third of its $6,000 goal.

Papoulias did not immediately respond to a request for comment from Mic.