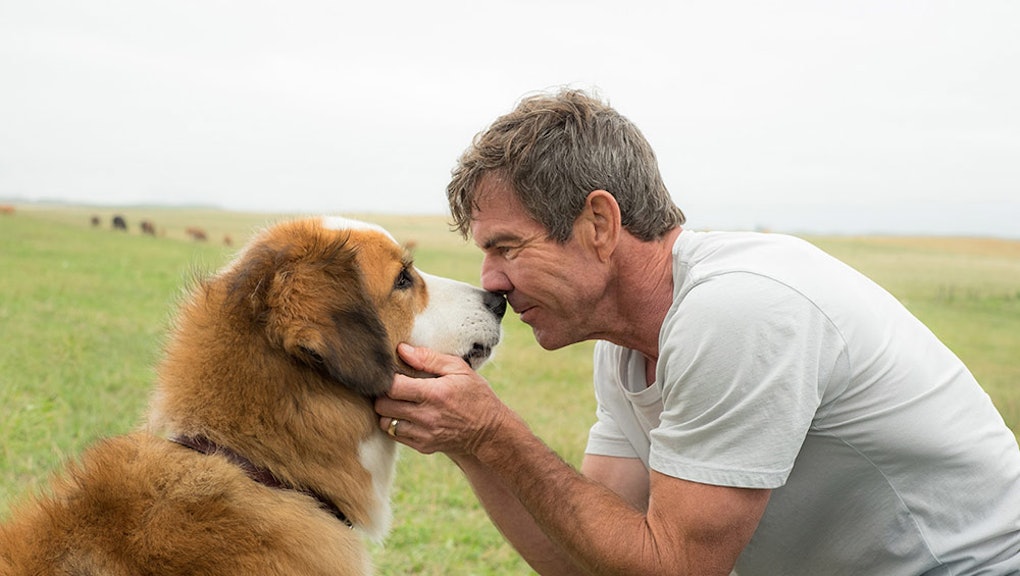 Come Jan. 27, Universal Pictures will release A Dog's Purpose, based on the best-selling book of the same name. The film's touching premise should theoretically invite families and lovers of animals to the theater. But the film is now facing considerable controversy over a video, which TMZ released Wednesday.

In the video, which TMZ reported was shot in November 2015, a German Shepherd is repeatedly forced into turbulent water, despite being visibly frightened. The dog attempts to escape the water several times before ultimately being pushed deeper. The video ends after the dog becomes submerged in the water and the filmmakers yell to cut.

Watch the video, via TMZ, below:

Since the video was released, responses have been pouring in from fans, producers and stars of the movie and animal rights groups. Deadline spoke with Gavin Polone, a producer on the film and noted animal rights activist, who said he was "horrified" by what happened during filming:

The first thing I asked was, 'Is the dog OK?' He's fine. But if I had seen that, I would have stopped it in a minute. People have to be held responsible for this. It was someone's job to watch out for this kind of thing. Why didn't they? This is something I've written about before, whether it be circus animals or animals on set. American Humane are supposed to be there supervising. That's their job that someone is paid a lot of money to do. Why wasn't this stopped? There needs to be a better system than this. That's what I've called for in the past. I agree with PETA that they not only need to make sure animals are treated properly on set, but they also need to find out where the animals are kept outside of the set. To make sure they are treated properly at all times.

Polone was not on set while filming of the scene occurred, but said had he been, he would have put a stop to it. "I wasn't there for the second unit,"  Polone said. "If I had been, I would have stopped it. All I can say is that I hope that bringing this out leads to better treatment of animals. I know the studio is outraged and investigating this."

PETA, which according to Deadline, is asking moviegoers to boycott the film, has released the following statement in the aftermath of the video being released:

PETA released a video expose of Hollywood animal supplier Birds & Animals Unlimited (BAU), which claimed to a PETA eyewitness they provided dogs used in the film A Dog's Purpose, new footage shows a terrified dog who is forced into churning water on set. At one point, a dog who is in danger of drowning has to be rescued. PETA is calling on dog lovers to boycott the film in order to send the message that dogs and other animals should be treated humanely, not as movie props. PETA's investigation at BAU revealed that animals are denied veterinary care, forced to sleep outdoors in the cold without bedding for warmth, made to live in filthy conditions, and more.

American Humane, which had a representative on set during the filming of the scene issued the following statement, via Deadline:

American Humane has reviewed the video and we are disturbed and concerned by the footage. When the dog showed signs of resistance to jumping in the water, the scene should have been stopped. We are placing the safety representative who was on the set on administrative leave immediately and are bringing in an independent third party to conduct an investigation into this matter.

Amblin production team followed rigorous protocols to foster an ethical and safe environment for the animals. While we continue to review the circumstances shown in the edited footage, Amblin is confident that great care and concern was shown for the German Shepherd Hercules, as well as for all of the other dogs featured throughout the production of the film. There were several days of rehearsal of the water scenes to ensure Hercules was comfortable with all of the stunts. On the day of the shoot, ?Hercules did not want to perform the stunt portrayed on the tape so the Amblin production team did not proceed with filming that shot. Hercules is happy and healthy.

Josh Gad, who voices dog character Bailey in the film, tweeted his shock following the discovery of the video. Gad said that upon originally lending his voice in the screening room, "I was beyond touched and moved by what I saw ... a movie that captures the beauty and pain of loving a pet." After seeing the disturbing video, however, he said he was "shaken and sad to see any animal put in a situation against his its will."

The disturbing nature of the video has also sparked a firestorm on Twitter. Many are rallying behind PETA, expressing similar wishes that moviegoers see something else instead of A Dog's Purpose.