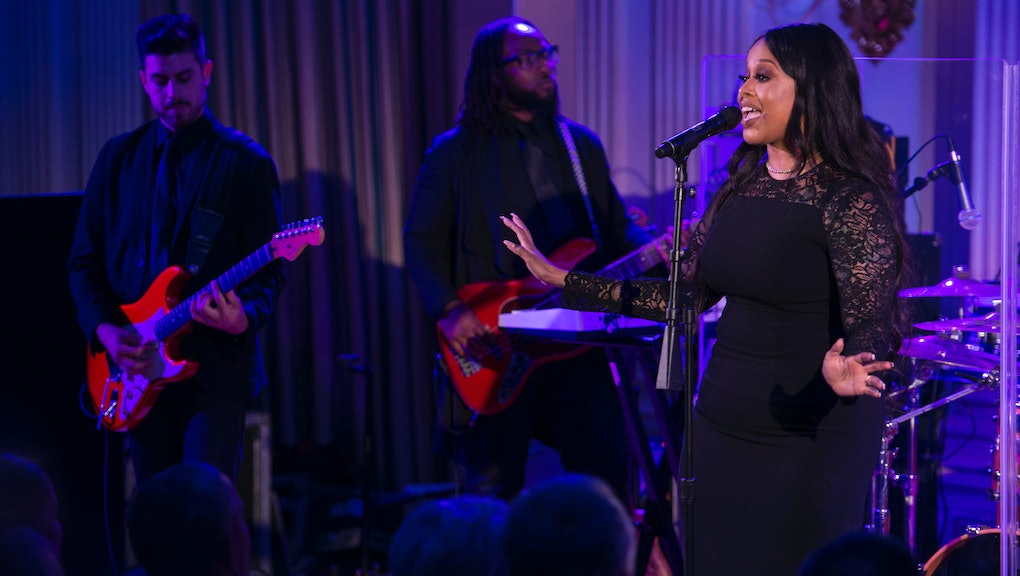 Wednesday, Grammy award-winning R&B singer Chrisette Michele confirmed she'll be taking on the unenviable honor of performing during President-elect Donald Trump's upcoming inauguration ceremonies. The news dropped jaws all over Twitter, and many fans demanded explainations and answers. Michele attempted to explain, but she did so with some of the most obscure language possible.

Michele sent a statement on her involvement to Mic early Thursday and posted the same on her Twitter.

The full text, minus the periwinkle font:

"My heart is broken for our country, for the hopes of our children, for the fights of those who came before us.I cry at the thought that Black History, American History might be in vain.This country has had great moments. God has shined His light upon us.Today, I hope that Great Moments begin in peaceful & progressive conversation. I am willing to be a bridge. I don't mind "These Stones", if they allow me to be a voice for the voiceless.I am here.Dr. Martin Luther King Jr. once said, "Our lives begin to end, the day we become silent about what matters,".I am here, representing you, because this is what matters."- Chrisette Michele#NoPoliticalGenius

The "#NoPoliticalGenius" sign-off comes from a Twitter message posted back in July begging that reader not seek to destroy all the progress that black people have made since the Civil Rights Movement through acts of protest. Many on Twitter saw her move to support Donald Trump, a candidate who spent an entire campaign stoking racial divides and has assembled a Cabinet filled with individuals with racist leanings, as doing exactly that.

Leslie Mac, co-founder of the Safety Pin Box, dove into Michele's mentions to school her on proper use of Martin Luther King Jr. quotes.

Other celebrities like Talib Greene pleaded with Michele to reconsider, putting some of the more vitriolic backlash into context.

This dragging was bound to happen. It hit Jennifer Holliday after she initally announced her plan to perform, eventually prompting her to pull out and issue an apology to the LGBTQ community that's long supported her. The B-Street Band, a Bruce Springsteen cover band, also pulled out of one of the inaugural galas out of respect for Springsteen, an outspoken Trump opponent.

Chrisette's statement is simply not coherent enough to deflect much (if any) of the crisiticism.

There may still be time for Michele to have an attack of conscience and go Holliday's way, but with every passing minute and ill-timed Twitter assault, that window shrinks a little more.