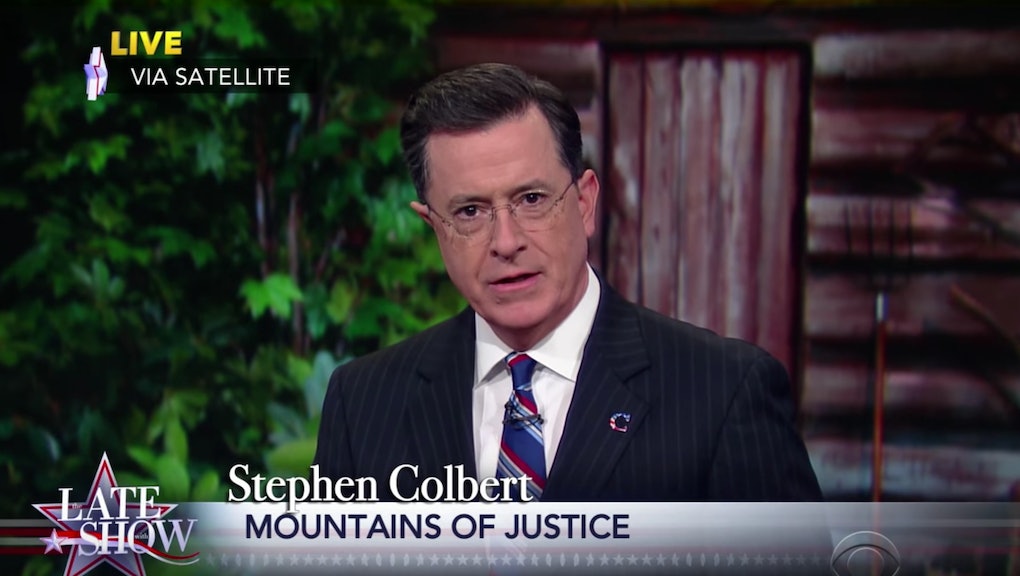 There are some complicated legal hoops that Stephen Colbert needs to jump through whenever he wants to use his conservative persona of the same name from his old Comedy Central show, The Colbert Report. As he's bemusingly expained before on The Late Show, that "Stephen Colbert" is the intellectual property of Comedy Central.

So, with that said, technically, The Colbert Report character didn't make an appearance Thursday night to bid farewell to President Barack Obama. It was Stephen Colbert's identical twin cousin, Stephen Colbert, who just so happens to be very conservative. This version of Colbert made his way from the "Mountains of Justice" to the Late Show studio, where, again, he didn't do "The Word" segment from The Colbert Report, but rather, "The Werd."

"Well, well, well, at long last our America-hating, secret Muslim, lead-from-behind, terrorist, fist-bumping, hopey-changy apologist-in-chief is leaving office," he said at the top of the bit. "I just got one thing to say to him, and it’s tonight’s Werd: 'Thanks, Obama.'"

Conservative Colbert cited some of the good choices Obama made during his administration, as the prompter on the screen read "Michelle!" But he was also happy that Obama used the NSA to spy on people, that he couldn't close down Guantanamo Bay and that he expanded the drone program. Then he broke down some of the ways the GOP fought him back:

"Obama said he was born in the United States, so we said he wasn't," Colbert says in the clip. "Obama said we should save the American auto industry, so we said, 'Let it die.' Of course, opposing everything he said sometimes meant abandoning our own beliefs. Just take Obamacare — he said it was going to help people, we said it was socialism, even though we know it was based on Romneycare."

However, with the Obama presidency about to conclude, conservative Colbert had something of an existensial crisis at the thought of Obama leaving office:

"Now the Obama era is coming to an end, and on behalf of everyone who opposed you, sir, I just want to say: Please don't go," he says. "I mean, honestly, without you, what do we believe? I mean, we had six years to come up with something to replace Obamacare, and the best we've got right now is Paul Ryan going door-to-door with a tub of Flintstones vitamins. I know Obama wanted to be a transformative president, and he was — he transformed me. And now I have no idea who that is."

Colbert then concludes, "So, for the last time, from me — the real Stephen Colbert — I just want to say: Thanks, Obama."

Watch the segment from Thursday's Late Show below: