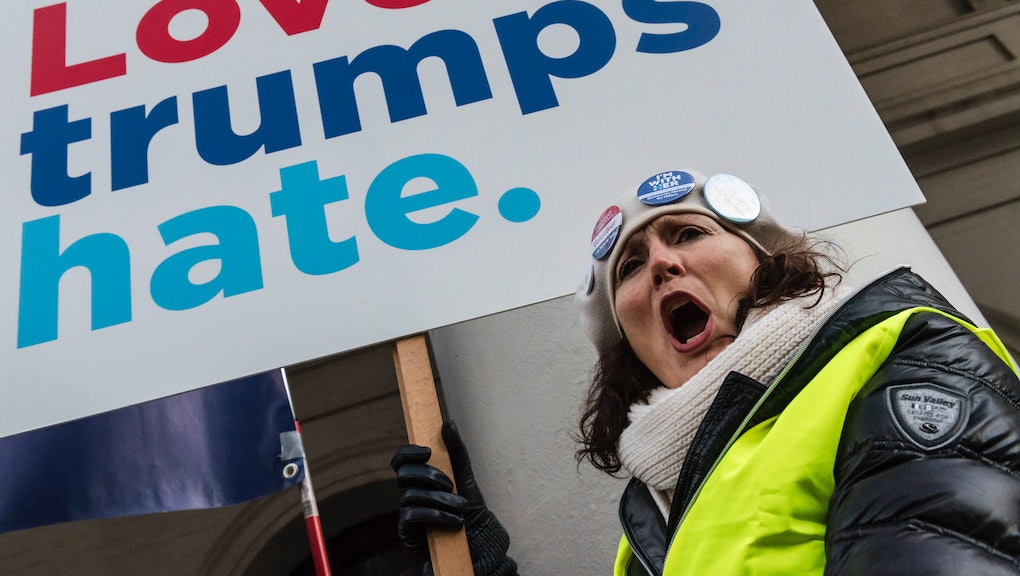 Donald Trump used to collect celebrity friends like they were rare Pokémon, but after running for president on a platform based on nativist, mysogynist and racist rhetoric he lost nearly all of them. His struggle to find talent to fill his inauguration ceremony was, for lack of a better word, sad. And it made for one of the most drab and uninspiring political rallies in recent memory. The Women's March on Washington, a rally organized to galvanize resistance to attacks on women's rights and religious soverignity, made assembling a fire lineup look easy.

The list of performers that are performing or have lent their support to Saturday's march, which is expecting thousands of bodies on the ground, is truly staggering. Janelle Monáe will be one of the headling the performances, alongside Maxwell, Angélique Kidjo, the Indigo Girls, Amber Coffman, DJ Rekha and rapper MC Lyte just to me a few. Additionally, Questlove, Grimes, Matt McGorry and Kim Schifino, Neko Case, Rakim and TV on the Radio have all joined the March's Artist Table, commiting to the March's mission, vision and unity principles.

However, the glamorous names are little more than salt in the wound for Trump, who's tweeted dozens of messages belitting others for poor ratings or overrated performances. The event is about so much more than a show of celebrity muscle. It's about uniting the people Trump refused to see on his slash and burn march, and the feeling that protesters and artists are looking to curate seems much better poised to do so than Trump's inauguration ceremonies.

Trump's inaugural speech at the foot of the capitol was remarkably grim, even for a candidate that's spent the past year attempting to convince the country it was falling to pieces and only he could make it great again. Considering the ways he's suggested we do that, with a Muslim ban and a border wall, his speech felt unnecessarily divisive, especially when compared with the words coming from the artists leading Saturday's Women's March.

"I am honored to join this critical movement to bring justice and equality to all," Monáe, a singer who's led Black Lives Matter and anti-mass incarceration protests in the past, said of the Women's March in a press release sent to Mic. "Music has always been a powerful tool for galvanizing unity and I believe that singing and standing together, our voices will be stronger than any force that tries to repress us."

Later Friday, she tweeted to fans she would be marching as a woman, not as an artist, seemingly further breaking down any border separating her from the other men and women who came to unite against "the abuse of power."

Every artist Mic has spoken to about this pivotal rally has related a similar sentiment. DJ Rekha, a London-born musician and activist made it clear in a recent phone conversation this is not an anti-Trump protest.

"I see this as it's own standalone thing, a necesseary moment for us to gather," Rekha said. "We don't need to be in opposition to anything. This is powerful in and of itself."

She's quick to note that this event is not a one shot deal. It's laying the groundwork for a much longer resistance. "Every day is more ridiculous than the day before," she said. "We've got to keep pressure on."

Similar rallies are being planned in 600 other cities and towns around the world, with the biggest being in Washington D.C., to create a global show of solidarity. Beninese singer Angélique Kidjo, a three-time Grammy award-winning artist and recipient of the Amnesty International Ambassador of Conscience Award, is currently on her way to perform in Washington. She detailed the role she'll seek to play in an email exchange.

"I feel my role as an artist coming from the African continent is to remind people again and again, through music and advocacy, how beautiful and important our cultural diversity is," Kidjo said. "This is what makes our shared humanity so precious. I know I am very naive but I feel music has this special power to bring the best in us. We are always singing to unify people, not to divide them. That is why I’ll be part of a march that will bring women from all walks of life together. From now on let’s say: 'Unify and conquer!'"

With her view of music being something that necessesarily unites, Kidjo isn't surprised Trump had difficulty getting mucisians to sign on to his inauguration.

Playing music for a politican seeking to divide is a "contradiction," she explained. "This is why it was so hard for them to find performers. Traditional music in Benin is the true cement of society. It is very inclusive, everyone is part of it."

The march's platform is far from perfect. There's been significant infighting among organizers who feel there hasn't been enough representation of women of color. "This march was initially put together by white women, and a lot of women of color felt they weren't part of the conversation," Carmen Perez, one of the March's national organizers, told NPR.

However, others argue there is too much of a focus on race, as Emma-Kate Symons wrote for the New York Times' Women in the World section, describing the March as a "grab-bag of competing victimhood narratives and individualist identities jostling for most-oppressed status."

Many current movements for peace and progress face this intersectional balancing act. The Democratic party too will face it in the coming years, in the way it defines its liberalim and approaches the hotbed of identity politics. Yet it feels like a productive struggle, one the Women's March seems willing to advance and not close itself around a single interpretation or party line. In this way, it feels poised to be a truly uniting moment for much of this nation.

The scars left by the election will not heal in a single weekend. But the Women's March and the capable, diverse range of artists leading its Washington contingent, will likely make bold steps towards a future poised to celebrate difference, rather than condemn it.