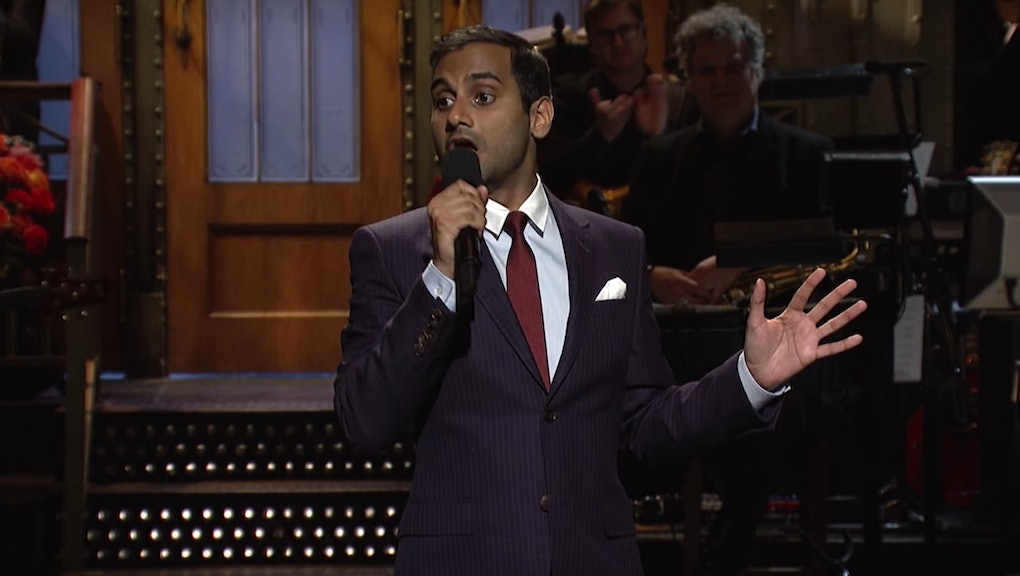 And when Ansari took the stage for his opening monologue, he didn't hold back.

Ansari, a stand-up comedian best known for his work on such shows as Parks and Recreation and Master of None, immediately turned his attention to Trump.

"Pretty cool though," Ansari pointed out, "to know [Trump's] probably at home watching a brown guy make fun of him, right?"

Americans opposed to Trump, Ansari explained in his monologue, shouldn't immediately demonize all Trump voters, noting that there are some that "voted for Trump the same way a lot of people listen to Chris Brown music" — they're "here for the music ... and don't condone the extracurriculars."

But Ansari did go after one group of Trump voters: the racists who have been emboldened by his victory, or, as Ansari calls them, "the lowercase KKK."

Asking them to "please go back to pretending" they're not racist, Ansari, a child of Indian immigrants, attacked the group's trope of telling minorities to "go back where you came from."

"My parents moved from India to South Carolina in the early '80s," Ansari said. "They didn't move until nine years ago. You know where they moved? North Carolina. They love it here. They're not leaving."

Explaining that the problem is that many Trump supporters "haven't interacted with any brown people in their normal lives," Ansari suggested such solutions as countering news programming about dangerous Muslims with stories about completely normal ones and changing the background music that accompanies Muslim characters on TV shows.

But he also called on Trump to give a speech specifically denouncing the "lowercase KKK" and the racism that has come to define many of his supporters — much as President George W. Bush did in a speech during his presidency, in which he, Ansari paraphrased, told Americans, "Islam is peace."

But Ansari had some hopeful words for Americans to close out his monologue, offering an important message to those worried about the future under Trump.

"If you look at our country's history, change doesn't come from presidents," Ansari said. "Change comes from large groups of angry people. And if day one is any indication, you are part of the largest group of angry people I have ever seen. Good luck to you."