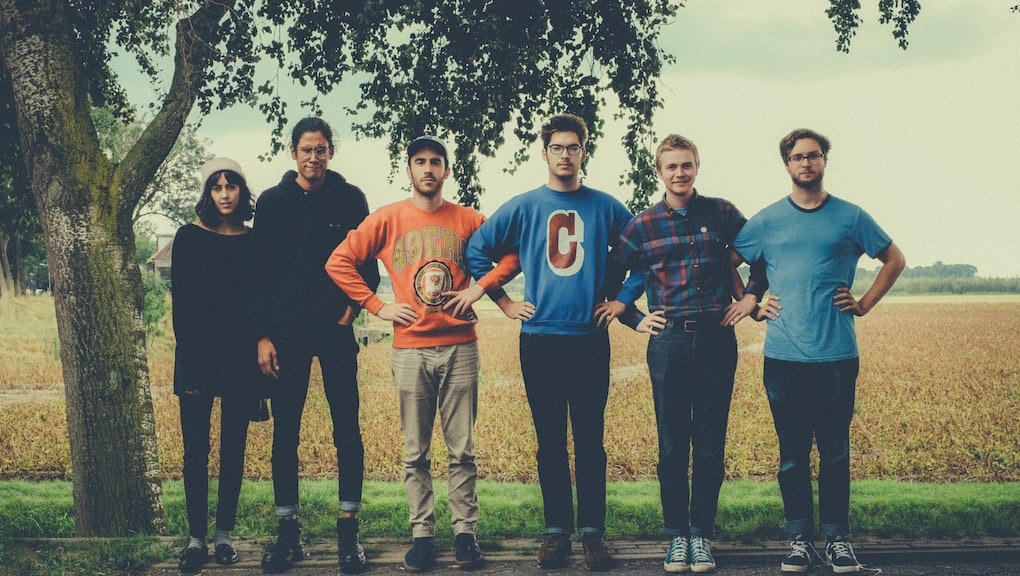 This election cycle, the music world has been an undeniable leader in resistance to President Donald Trump administration's promised attacks on civil liberties, free speech and reproductive rights. At the highest levels, musicians like Janelle Monae and Beyoncé have helped raise the profile of events like the Women's March on Washington. Meanwhile, artists like Sadie Dupois of Speedy Ortiz and Dirty Projectors used their voices to perform anti-fascist concerts over inauguration weekend.

Many concerned musicians have found their place. Few have made more noise with their contributions than rising indie folk act Pinegrove, from Montclair, New Jersey.

The group made headlines in December for opening their entire catalog for pay-what-you-want on Bandcamp and promising to donate all the proceeds to Planned Parenthood, an organization that will likely be defunded under President Trump. Pinegrove's offerings included their stunning debut LP Cardinal, an album of shimmering and heartfelt folk that sat on the higher end of many publications' end-of-year best of lists.

On Friday, Inauguation Day, the band added another album to the donations list, a live EP titled Elsewhere. The proceeds will go to support the Southern Poverty Law Center, a nonprofit fighting racial and social injustice.

"We are saying, hey, listen, we’re in this," Pinegrove's Zack Levine told Mic in an email exchange. "We are paying attention. We are shifting our priorities to center around this, and we understand that it is our responsibility to do so. This is not going to be a flash in the pan, a New Year’s resolution abandoned in February — we fully plan on staying engaged and active about this for the rest of our lives."

So far, the band has raised over $21,000 for Planned Parenthood, having donated the $7,000 they raised from Bandcamp on a day when donations were tripled thanks to a grant, the band explained. Through their T-shirt sales and donation jars at shows, they also managed to provide $2,424 to two groups fighting for justice at Standing Rock including the Medic and Healer Council and the legal defense fund. They're impressive figures for an indie band driving most of their sales through Bandcamp, with little radio support.

To learn more about the latest project and whats next for the group, Mic emailed with Levine and Pinegrove over the weekend following Inauguration Day. The band explained what motivated them to use their music as a platform to support today's endangered progressive causes, and how this election has changed the game for all artists with an activist bent.

The interview has been condensed and edited for clarity.

Mic: Tell me about the decision to start donating your Bandcamp proceeds? What inspired it?

Pinegrove: We began to donate Bandcamp proceeds the day after the election. We were on tour then — we played a show on election night in Houston, which was definitely an intense and challenging experience for all of us. The morning after, we held a band meeting at a restaurant about how to move forward. I think we all felt committed to step up our participation in the fight for … well, right, this was part of the conversation.

What exactly are we fighting for? How do we wade through the overwhelming number of issues on our minds? We came to the agreement that almost all of these issues boil down in some way or another to the overarching concept of human equality. So that’s what we recommitted ourselves to that morning.

Which leads us to Elsewhere on Inauguration Day.

P: Yeah, on Inauguration Day, we released a live album of songs from this last tour. We’re donating all proceeds from that to the Southern Poverty Law Center. We’re also donating all of our merch proceeds from our show this July at Panorama Festival to the Trevor Project. All this is to say, the day after the election was the day we decided to double down on our commitment to equality and to speaking up and acting on it. And if there is one silver lining to be taken from the election, I’d say it’s that a lot of people are doing the same.

Your Planned Parenthood donation speaks to the challenges young people will face finding affordable insurance and reproductive health care if Trump gets his way. Do you all have any personal ties to that issue? What will happen to the band?

P: Yeah, we're all afraid of it! None of us are on our parents' health plans anymore, so we all rely on ACA health care. We’ve all quit our full-time jobs this year, so we're on our own as far as that goes.

But speaking for myself as a white male, Planned Parenthood has less to do with my hardships and more to do with an organization that does good for so many people across the country — many of whom are underprivileged. People who argue for the defunding of Planned Parenthood are arguing that not everyone has the right to choose a path for their own body. What better way to support equality than to fight against that?

More pressingly, we know that Planned Parenthood will be facing a legitimate existential threat under the new administration. So this selection is about giving them as much as we can for their fight to survive.

How might Trump's win affect the working-class New Jersey you know? And what are your hopes for the future in the place where you grew up?

P: Trump’s win has the potential to affect New Jersey in the same way it has the potential to affect everywhere else in the country. Racism, sexism, homophobia, transphobia, Islamophobia and xenophobia in general will have encouragement from the man sitting in the most powerful position in the world. Climate change will continue at its rapid pace unhindered. Corporate greed will be unchallenged.

That said, these problems have existed since long before Trump was part of the equation. It’s important to realize that a lot of these issues are systemic, and in many ways Trump is a symptom as much as he is a cause. So, we have a lot of work to do! I do think Montclair is a particularly progressive place, and I think we all have high hopes that our town can be a leading center of resistance.

Does this spirit of giving relate to your music itself in any way?

P: It does. For Evan and for all of us, these songs are about challenging yourself to love better. That’s what we’re all thinking about every night, playing these songs on tour. And I know that for me personally, loving and giving are inextricable.

Our music isn't overtly political, but I would call it positive and hopeful. We are striving to connect with people every night. We care a lot about inclusivity, about accessibility.

We want everyone who is interested to be able to come to our shows, regardless of age, regardless of economic standing, regardless of physical ability. We want to speak with our fans after shows. I think that all comes back to the point of equality. We are all, fundamentally, equal. Through our music, through our actions, and through our donations, that's what we're trying say.