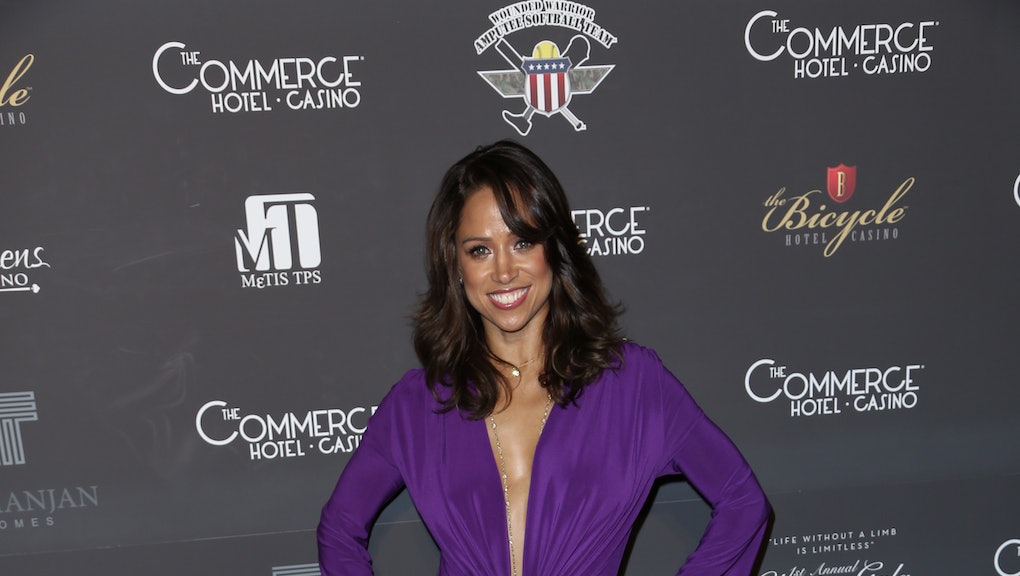 According to the Hollywood Reporter, the actress and political commentator has gotten the boot from Fox News, where she debuted in 2014. A spokesman told THR the decision was made last fall, which is why Dash hasn't been on air since September.

Both during and before Dash's time as a commentator on conservative TV shows, she had a real knack for putting her foot in her mouth when it came to U.S. race relations, xenophobia and transgender issues.

Here are just a few things Dash said that fired up the internet:

While appearing on Fox & Friends, Dash made an impassioned plea to get rid of the BET Awards, "where you're only awarded if you're black." She claimed channels like BET encouraged segregation and suggested Black History Month should go away, too:

2) Trans people should use the bathroom in the bushes

In an interview with Entertainment Online that somehow veered into questions of gender identity, Dash said a trans person's gender identity is less important than her own beliefs when it comes to using the restroom.

"OK, then go in the bushes. I don't know what to tell you, but I'm not gonna put my child's life at risk because you want to change a law,"  Dash said. "So that you can be comfortable with your beliefs, which means I have to change my beliefs and my rights? No."

After actor Jesse Williams delivered a powerful speech at the BET Awards on what it means to be black in America, Dash used her Patheos blog to slam the Grey's Anatomy star.

"You've just seen the perfect example of a HOLLYWOOD plantation slave," Dash wrote. "Sorry, Mr. Williams. But the fact that you were standing on that stage at THOSE awards tells people you really don't know what you're talking about. Just spewing hate and anger."

BET used its Instagram account to remind Dash that she, too, once got a check from them.

4) Everything she said after the Orlando massacre

After the Pulse nightclub shooting in Orlando, Florida, Dash made a series of off-putting comments. First, she used the moment to campaign for Donald Trump and misspell "LGBT."

While promoting her book, Dash also told radio station WPHT that if those in the club were able to carry guns, the massacre may have had a "different outcome," BET reported.

"This tragic, horrific incident is proof of that. Had there been men in there, or women in there, who were allowed to carry a weapon, that were good guys, maybe so many people might not have died," she said. "There would've been a fair fight. But, unfortunately, of course, people who want to kill people, they don't play by the laws. They don't go by the gun laws. They don't play by the rules. They're going to carry guns anyway. So then, why don't you give the good guys guns so that we can protect ourselves?"

5) Standing up for voter ID laws

For most people, voter ID laws are a racist continuance of the long-standing American tradition of finding ways to make sure black people can't vote. But, to Dash, they just make a lot of sense.

When Trump was campaigning for president, his rallies were often more violent than the average political gathering. Dash felt the need to defend Trump when people wanted to hold him accountable for this violence. In her Patheos blog, Dash clarified that Trump is not "violent" and invoked his New York City upbringing in defense of the future president.

"He's not violent, he's just 'street.' He was born in Queens," she wrote. "Of course, that doesn't mean he was hustling on the street, dodging bullets. I know he had a privileged upbringing that no doubt isolated him from much of the violence and strife that some people grew up with in the city."

After media mogul Oprah Winfrey drew a comparison between the deaths of Trayvon Martin and 14-year-old Emmett Till, Dash used her Twitter account to call out Winfrey. She used a Malcolm X quote about the media's penchant for demonizing black people.