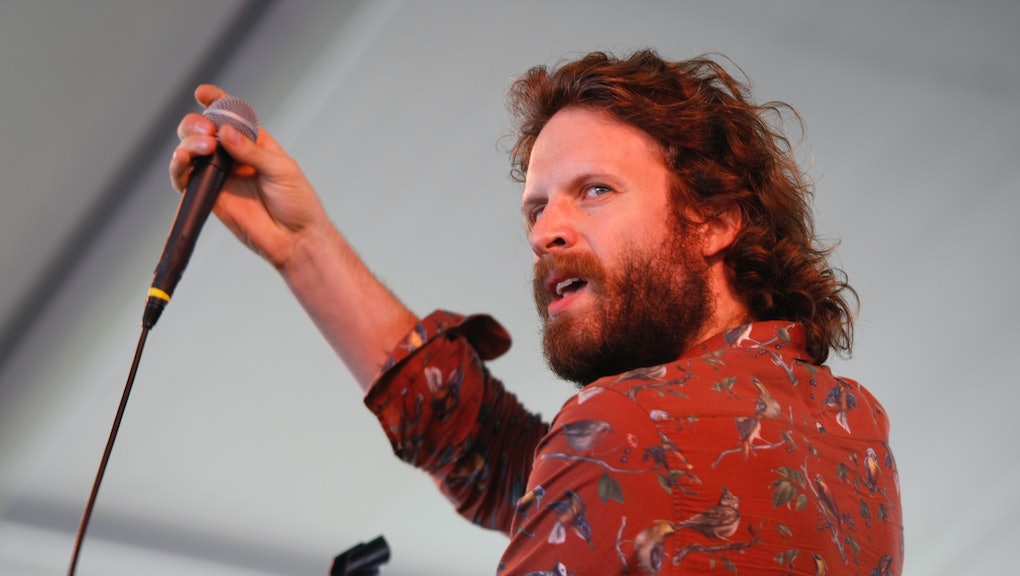 Father John Misty explains the rise of Trump on "Pure Comedy," starting with where babies come from

Over the next four years, America's sense of humor will be tested and stretched to its breaking point. The nation's first trial: Audiences watched a high-ranking Donald Trump official Sunday attempt to explain that an outright falsehood uttered by press secretary Sean Spicer about Trump's inauguraton crowd size was not a lie, but actually an "alternative fact." It was hard not to see it as a distrubing joke in a very real comedy of errors.

That's exactly what the world is today, according to Father John Misty, as he seems to explain in his new song and video "Pure Comedy," released Monday. In it, he attempts to explain the rise of Trump and the "confusion" he's ushering in, concluding: it's "comedy ... like something that a madman would conceive."

But it didn't begin with Trump. This a comedy that starts with basic human biology, ties in religion, wrestler John Cena, Kanye West and the Pepe meme, which are all alluded to in the video. It makes for possibly the least funny YouTube video ever released with the word "comedy" in the title, but perhaps the most necessesary.

"The comedy of man starts like this," Misty begins on the track. "Our brains are way too big for our mothers' hips/ And so nature, she divines this alternative/ We emerged half-formed and hope that whoever greets us on the other end/ Is kind enough to fill us in."

He lists some of the key SparkNotes human babies learn about, including religion, which he describes as a collective obsession with "risen zombies, celestial virgins, magic tricks, these unbelievable outfits." He talks economics and science where adults "build fortunes poisoning their offspring/ And hand out prizes when someone patents the cure."

He mocks the dogmatic obsession with Trump with effortless satire:

Where did they find these goons they elected to rule them?What makes these clowns they idolize so remarkable?These mammals are hell-bent on fashioning new godsSo they can go on being godless animals

The song is par for the course with Misty's recent comments about the utility of entertainment. During a July show in Camden, New Jersey, he ranted about the "numbing" effect entertainment has been having on the country.

"It feels better to be angry than it does to be fucking devastated that shit looks the way it looks," he told the crowd, rebuking them for cheering, according to Pitchfork. "No, no, no, don't even cheer for that. Maybe just take a moment to be really fucking profoundly sad. It's a lot less sexy of a festival look."

"Pure Comedy" seemingly turns that sentiment into sonic form, making for one of the more challenging and brilliant songs in Misty's catalog to date, right when fans need it most. It hints at a potent truth artists and comedians should consider as they look to find new ways to entertain in Trump's America: When the world starts to get seemingy dumber, comedy has to get smarter.