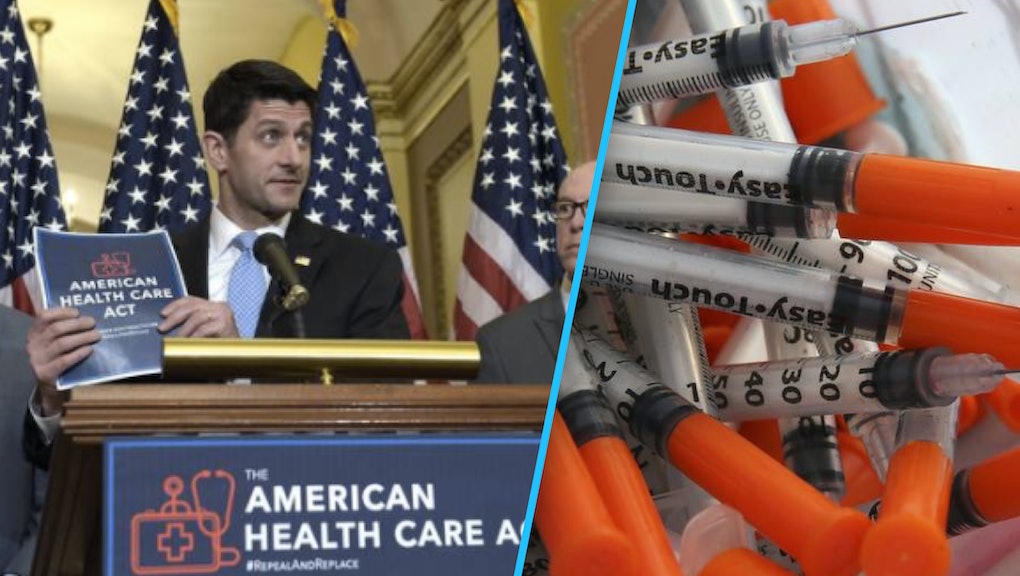 The US opioid crisis is real and deadly. Trumpcare could make it even worse.

Connie Petroski can't remember the exact moment her daughter, Jessica, went from being a sunny 17-year-old who loved dressing up for school dances and hanging out with her friends to a sullen, quiet 18-year-old alternating between falling asleep upside down on the toilet and getting into hysterical shouting matches with her mother.

"She just got with the wrong person and started with cocaine, and it just goes from there," Connie said in a phone interview. "It's just one drug after another and nothing ever gets strong enough, so that's when they turn to heroin."

Jessica is just one of the estimated 2.1 million Americans currently struggling with opioid addiction, and the epidemic is only getting worse. In 2015, the most recent year on record, opioids killed more than 33,000 people — a record. From 2014 to 2015, deaths from synthetic opioids like fentanyl, the painkiller that was found to be responsible for the 2016 death of the singer Prince, rose by 75%.

As the opioid crisis balloons in scale, imminent cuts to Medicaid and the introduction of the American Health Care Act under President Donald Trump threaten to eliminate health coverage for millions of Americans who rely on the Obama-era expansions to access addiction treatments.

Jessica is one of those people. Today she is 35 and, according to Petroski, her recovery is sustained by a bi-weekly supply of Methadone meted out with the help of Medicaid.

"If she didn't have the Methadone, she could die," Petroski said bluntly. "You can't just stop. You can't just come off the medication. The risks of dying are so high."

In Febuary 2016, Trump, then a Republican presidential candidate, stood onstage during a CNN town hall and decried the idea that, if elected, his administration would turn a blind eye to the millions of Americans who rely on government programs to access treatment for opioid addiction.

All along the campaign trail, he continued to trumpet the same promise, in no uncertain terms: No cuts would be made to entitlement programs.

But on March 6, House Republicans unveiled their long-awaited Affordable Care Act replacement plan — a plan that could result in between 6 million to 10 million people losing their coverage if enacted, according to an early estimate by Standard & Poor's.

In particular, the new legislation would make sweeping changes to the Medicaid expansion instituted under the ACA. Instead of the open-ended funding that the program received under Obama, Republicans are proposing population-based caps on the states' Medicaid budgets, which would go into effect by the year 2020. According to most estimates, such a change would likely deal a major blow to the 74 million Americans who currently rely on the program for health care.

Republicans have long been vocal about their desire to "repeal and replace" the ACA, but the proposed cuts to Medicaid have been enough to give some prominent conservatives pause.

In a letter sent to caucus leaders after a draft of the AHCA legislation leaked on Monday, four senators wrote that they "will not support a plan that does not include stability for Medicaid expansion populations." The lawmakers all hail from states that have been hit particularly hard by the opioid epidemic.

Ohio Gov. John Kasich was also vocal in his opposition, arguing the plan "unnecessarily puts at risk our ability to treat the drug-addicted, mentally ill and working poor who now have access to a stable source of care."

Dr. Leana Wen, the city health commissioner of Baltimore, Maryland, a city hit hard by the opioid crisis, said in a phone interview that any change to health care legislation that results in a lack of access to treatment would pose a major threat to the progress she and her team have made.

"For us, this is not about partisanship — it's about people's lives," she continued. "And we can not penalize individuals with the cost of their lives."

Even under the ACA — which enabled an estimated 22 million Americans to obtain coverage in 2016 — addiction treatment programs groaned under the weight of the rapidly increasing number of Americans with substance abuse problems.

Obstacles to treatment already include the soaring price of naloxone — the FDA-approved medication, more commonly known by its brand name, Narcan, that reverses the effects of an opioid overdose — and overrun treatment centers, which are forced to turn patients away due to a lack of available beds.

In 2016 alone, Baltimore, a city of 620,000 residents, saw more than 600 overdose-related deaths. That high number is indicative of the rampant opioid abuse occurring within America's cities, and Wen has worked tirelessly to reduce it during her time in office.

In the past year, Wen became the single prescriber for naloxone, and wrote a blanket prescription for every single resident in Baltimore so that they'd be ready to take action wherever an overdose happened. She also oversaw the implementation of more than 18,000 trainings on how to dispense the drug across the city, from markets to public housing projects, in an effort to reach people "where they are."

But arming residents with naloxone is only one way to save lives, Wen said. The other is to treat and prevent addiction before it takes hold — and with the AHCA's proposed cuts to government-funded programs, those treatment options could be even worse off than they already are.

"There's no margin of error when it comes to addiction treatment."

"We already have such a great deficit of treatment that's available," Wen said. For individuals who have already managed to cut through red tape to access treatment and are currently stably maintained, she added, "The last thing that we need is for their lives to be put in jeopardy."

If someone were stably maintained on a treatment program and lost their insurance, they could go into withdrawal and be forced back onto the streets to use drugs again, according to Wen.

"Potentially, then, that individual may overdose as soon as that day," she said. "There's no margin of error when it comes to addiction treatment."

"Approximately 10% of the population has a substance abuse problem that we would consider addiction," Scharff said in a phone interview.

"Only 13% of those people are ever going to get any treatment at all," she continued. "And we're going to knock that back?"

The unintended consequences of reducing access to health care

Increasing access to addiction treatment helps everyone — not just those who abuse drugs.

"When [people] get clean, they go out, they produce in the workforce, they're paying taxes, their kids aren't in social services and foster care," Scharff said. "It is a huge win — forgetting the compassion side — just for dollars and cents."

Getting treatment helps people become productive members of society, she added, "but that's not how we treat it."

Dr. Ira Kirschenbaum, the chairman of orthopedics at Bronx-Lebanon Hospital Center, said the possibility of so many people losing coverage raises questions about what patients will do in order to receive the care they need.

In a phone interview, Kirschenbaum said he couldn't think of "anything more important" for battling addiction than people being able to stay on their medicated recovery plans.

Health care under Trump could worsen the opioid epidemic by creating obstacles for treating common maladies, like back pain, that force patients to turn to self-treatment in lieu of medical attention, he said.

"What's self-treatment? Begin to take some pain medicine that you buy off the street or off of somebody else," he said. "People will always find a way to decrease their pain."

Indeed, opiates like fentanyl are cheap, increasingly ubiquitous and easy to obtain on the streets.

Wen had a more grim assessment of the potential risks of a Republican health care plan. A few days before our interview, she spoke with a patient in a clinic who said health insurance "has been her rock." The patient said it had enabled her to get treatment for her substance abuse disorder and her mental health, and thus had allowed her to get her life back together.

Now, Wen said, she's "terrified that all of this is going to be taken away from her."

"This is not just a policy question for some of these people," she said. "It really is a matter of life and death."