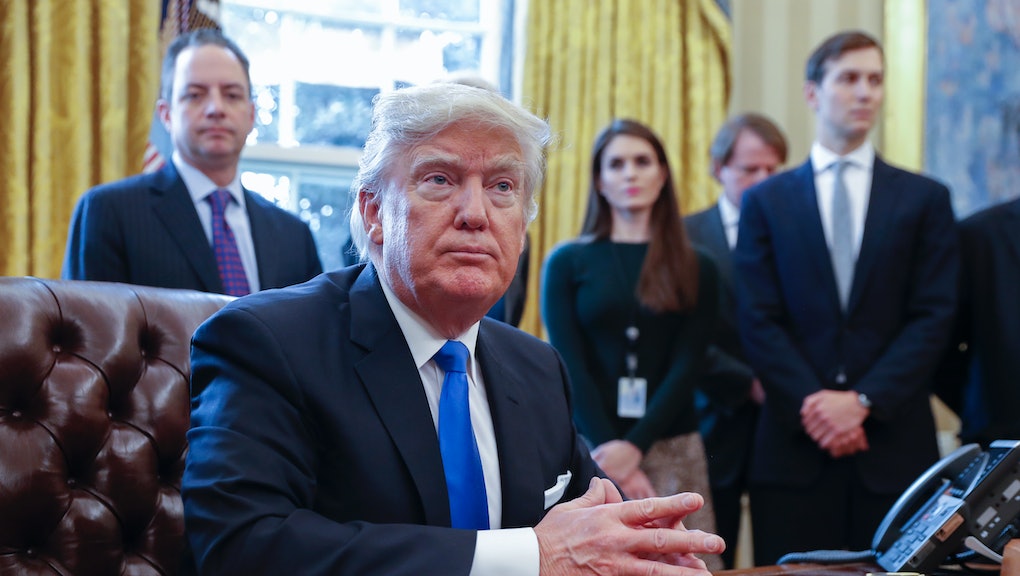 The legislation is titled the "Restricting First Use of Nuclear Weapons Act of 2017." The two legislators issued a press statement on the bill co-signed by William Perry, who served as secretary of defense in former President Bill Clinton's administration.

It's not idle speculation Trump might not quite know how to handle the U.S. nuclear arsenal. Throughout the campaign season, Trump appeared not to grasp basic aspects of nuclear policy like the nuclear triad, the U.S. doctrine of maintaining nuclear weapons on land, sea and air. He's repeatedly suggested U.S. forces could use nuclear weapons in the field — despite the fact doing so could both kill millions and trigger retaliatory strikes that kill even more — and thinks the military should be "unpredictable" with nuclear weapons, a tactic that if adopted would undermine the doctrine of mutually assured destruction.

Trump has also proposed U.S. allies like South Korea and Japan build their own nukes and that an nuclear arms race with Russia is desirable. He also suggested he might respond to an ISIS terrorist attack with a nuclear strike — despite the fact ISIS is not a national government and retaliatory strikes against it would kill countless civilians without wiping out the organization's international cells.

As the New Yorker's Eric Schlosser reported in December, aging defense and detection systems, the possibility of cyber attacks on nuclear infrastructure and poor training have all combined to make the possibility of a hastily launched or accidental nuclear apocalypse as high as it has ever been. Furthermore, the president "has the sole power to order the use of nuclear weapons, without any legal obligation to consult members of Congress or the Joint Chiefs of Staff," and in a crisis may only have minutes to make such a decision.

This is of course terrifying coupled with the numerous accounts leaking from the administration of Trump's instability and general moodiness, as well as his preoccupation with slights and perceived insults. But since Markey and Lieu's bill only applies to first-strike scenarios, it would only prevent Trump from launching a nuclear war for no good reason, not bumbling into launching one because of a false alarm.

Republicans, who control both the House and Senate, are likely going to balk at any proposal to take control of the country's nuclear arsenal out of the unilateral control of the president.