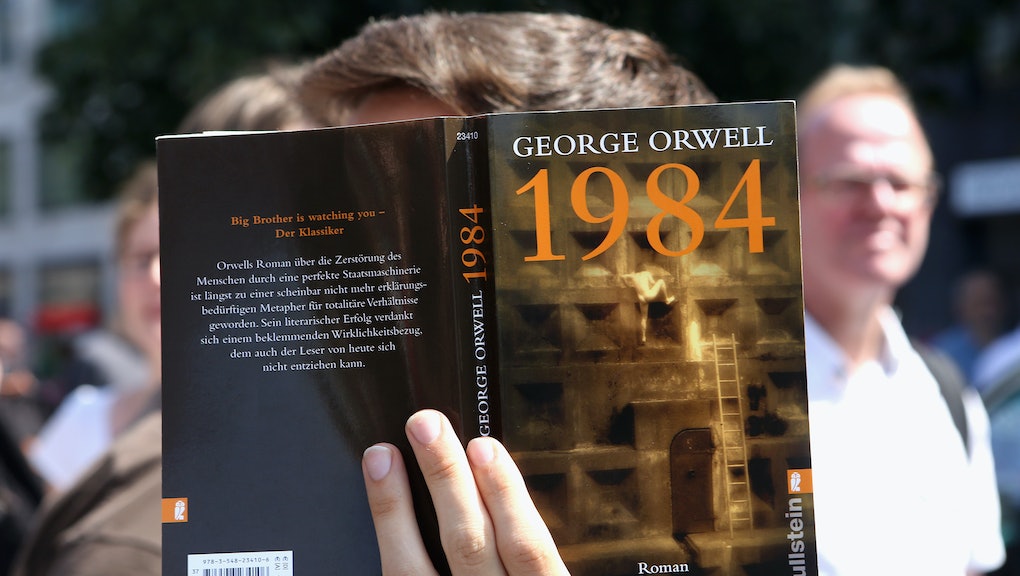 Since taking office on Jan. 20, President Donald Trump's administration has been at odds with the media over reporting around his inauguration attendance numbers and his claims of widespread voter fraud in the last election. Additionally, he has advanced a number of measures, creating a political atmosphere that some are comparing to the dystopian fiction novel 1984 by George Orwell, published in 1949.

As of Wednesday morning, the book had spiked to the number one spot on the Amazon.com best sellers list.

1984 follows the protagonist Winston Smith who lives in Oceania, a society under totalitarian rule. Winston is part of the ruling party and works at the government's Ministry of Truth, but longs for revolution and to overthrow Big Brother, Oceania's symbolic leader.

As many consult the book to see how life imitates art, we join the concerned citizens and point out four eerie similarities between Trump's America and the classic novel 1984.

On his second day in office, Trump's press secretary Sean Spicer said they had "the largest audience to ever witness an inauguration, period, both in person and around the globe." After pushback regarding numbers, Trump adviser Kellyann Conway defended Trump's version of events, calling them "alternative facts."

But photographs from the day tell a different story and show that the attendance numbers reported by Trump's administration aren't true.

Winston worked for the Ministry of Truth, which did the work of revising and destroying books, newspapers and materials that conflicted with their messages. Big Brother could never be wrong. This process was called doublethink.

In part one, chapter three of 1984, Winston tries to piece together the history of Oceania but doublethink has altered his perception of what is truth and what is fiction:

His mind slid away into the labyrinthine world of doublethink. To know and not to know, to be conscious of complete truthfulness while telling carefully constructed lies, to hold simultaneously two opinions which cancelled out, knowing them to be contradictory and believing in both of them, to use logic against logic, to repudiate morality while laying claim to it, to believe that democracy was impossible and that the Party was the guardian of democracy, to forget whatever it was necessary to forget, then to draw it back into memory again at the moment when it was needed, and then promptly to forget it again: and above all, to apply the same process to the process itself.

On Tuesday, Trump issued a media blackout for the Environmental Protection Agency and the USDA's Agricultural Research Service, banning them from releasing any press releases, blog updates or social media posts. The Interior Department's Twitter pages were temporarily shut down after retweeting side-by-side photos of Trump's inauguration compared to Obama's in 2009. Some were alarmed by this effort to block these communications.

In 1984, Big Brother kept control several ways: a telescreen that monitored the actions of the ruling party and thought police; by using children, known as Junior Spies, who reported even their parents if they were not following the ruling party and by creating their own language known as Newspeak, which would censor words and create new meanings. Also the face of Big Brother as a symbol haunted Winston and was a form of mind control.

Throughout Trump's political campaign, he has been criticized for creating a climate of hate towards Mexicans, Muslims, women and African-Americans, and many of his cabinet appointees have a history of racism. This week he is expected to approve a temporary ban on issuing visas to refugees from several Middle Eastern and African countries and is headstrong on building a wall on the Mexican border to control immigration. Much of Trump's Twitter account can be seen as a daily "two minutes hate" meeting. Here are some recent tweets from him.

During Two Minutes Hate, Winston and other party members would attend a large daily conference where they were shown footage on the activities of Oceania's enemies, primarily Emmanuel Goldstein, the Enemy of the People. This would be followed by a message from Big Brother. Winston was never comfortable with these meetings but eventually gets pulled in.

The horrible thing about the Two Minutes Hate was not that one was obliged to act a part, but, on the contrary, that it was impossible to avoid joining in. Within thirty seconds any pretense was always unnecessary. A hideous ecstasy of fear and vindictiveness, a desire to kill, to torture, to smash faces in with a sledge-hammer, seemed to flow through the whole group of people like an electric current, turning one even against one's will into a grimacing, screaming lunatic.

Winston often envied the life of the proletariat, also known as proles, because they were able to live in a state of blissful ignorance. They were not taunted by the truth and were left to their vices, unlike those of the ruling party who were monitored more closely. Winston believed that if the proles could wake up they could overthrow the government. Big Brother did not see them as a threat and kept them too distracted to be aware of the truth, as described in part one, chapter seven of the book:

To keep them in control was not difficult. A few agents of the Thought Police moved always among them, spreading false rumours and marking down and eliminating the few individuals who were judged capable of becoming dangerous; but no attempt was made to indoctrinate them with the ideology of the Party. It was not desirable that the proles should have strong political feelings. All that was required of them was a primitive patriotism which could be appealed to whenever it was necessary to make them accept longer working-hours or shorter rations. And even when they became discontented, as they sometimes did, their discontent led nowhere, because being without general ideas, they could only focus it on petty specific grievances. The larger evils invariably escaped their notice.

Could Trump be using the same tactic of distraction to keep his supporters and those filled with apathy about politics from knowing about all of his activities? It is very possible. Today the Democratic National Committee issued a statement saying that Trump was using his voter fraud case as a distraction from a current investigation into Russian's involvement in US elections last year.

In November, he was also said to be distracting people from greater issues when he went on a Twitter tirade against the cast of the Broadway show Hamilton.

"If he's interested in doing his new job as our President, he should protect our nation by cooperating with Congress and the Intelligence Community investigations into Russia's attack on our elections and his team's potential collusion with them," the DNC wrote.

However, the estimated 450,000 people in attendance at the Woman's March on Washington Saturday who protested Trump and his policies illustrates that many are very aware and not distracted enough to stand against any of his actions.