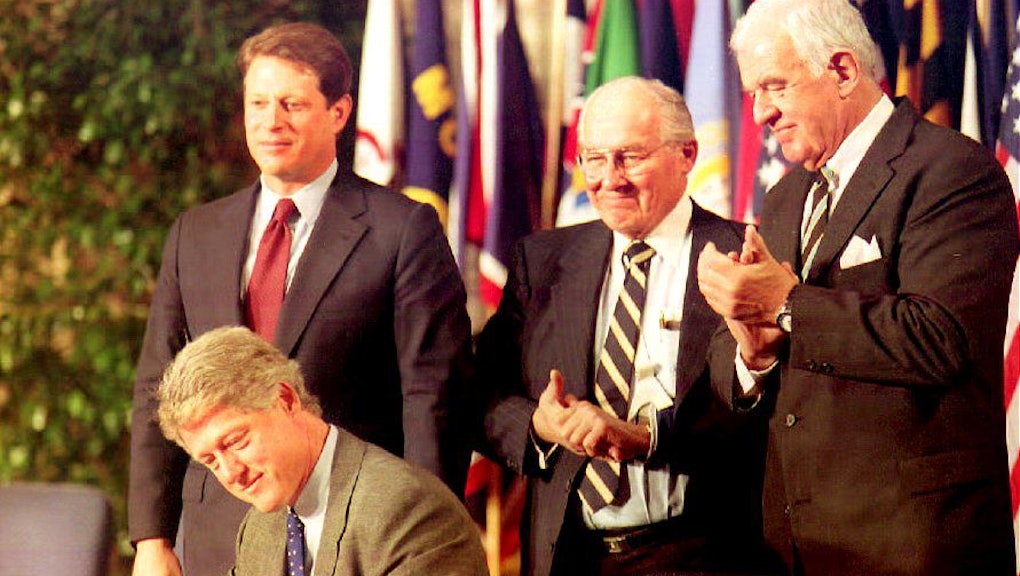 In the aftermath of President Donald Trump’s decision to sign an order to withdraw the United States from the Trans-Pacific Partnership, focus has shifted to another trade deal that was firmly in Trump’s crosshairs during the election — the North American Free Trade Agreement.

NAFTA was the free trade boogeyman of the 1990s, attracting the same types of criticism from the labor left and the economic nationalist right that TPP did in the past several years.

The purpose of NAFTA was to open trade relations between the United States, Mexico and Canada. It came into effect in 1994, following years of negotiations. While Bill Clinton is often tagged with the sting of NAFTA’s legacy, President George H.W. Bush started negotiations for the deal and signed it. Clinton’s embrace of free trade, though, is seen by many as a slap in the face to the labor voters who are considered a base of Democratic Party support.

How does NAFTA work?

Essentially, it makes the three participating countries a common market when it comes to trade – meaning American companies can move production facilities and send products to the other two countries without dealing with tariffs or other laws.

It is easy to see, then, why many in organized labor were upset by the deal. Mexican workers are paid less than their U.S. counterparts, so it makes economic sense to fire workers in the United States and hire Mexican laborers to do the same work at a significantly lower price. Companies can then sell the products in the United States just as they did before, due to the lack of tariffs.

Supporters of free trade — a club that, until recently, included most of the leaders of both major parties — argue that the positive impacts of NAFTA outweigh the bad. Trade has skyrocketed and the lack of tariffs results in lower prices when American consumers, especially around items like fresh produce. The oil industry also relies on free trade, as the U.S. imports large amounts of oil from both Mexico and Canada.

There were also negative effects felt in Mexico, though. Local farmers had to compete with American farmers who get government subsidies, and could thus offer much lower prices than the family-run farms could.

President Donald Trump has said he wants to renegotiate or, perhaps, even withdraw from NAFTA. Given that, unlike TPP, this would be an actual massive change to the status quo, it is difficult to predict exactly what a post-NAFTA North America would look like.