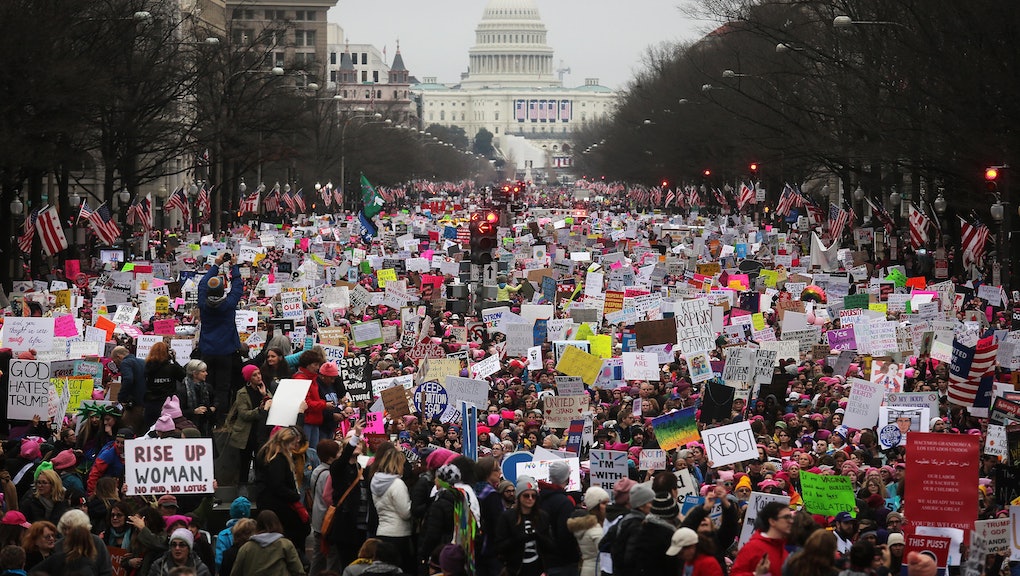 Our cynicism will not build a movement. Collaboration will.

I’ve been grappling with how to challenge cynicism in a moment that requires all of us to show up differently.

On Saturday, I joined more than a million women in Washington, D.C., to register my opposition to the new regime. Participating in the Women’s March — if you count satellite protests around the country, the largest one-day mobilization in the history of the United States — was both symbolic and challenging.

Like many other black women, I was conflicted about participating. That a group of white women had drawn clear inspiration from the 1963 March on Washington for Jobs and Freedom, yet failed to acknowledge the historical precedent, rubbed me the wrong way. Here they go again, I thought, adopting the work of black people while erasing us.

I’d had enough before it even began. 53% of white women who voted in the 2016 presidential election did so for a man who aims to move society backward. Were white women now having buyer’s remorse? Where were all of these white people while our people are being killed in the streets, jobless, homeless, over incarcerated, under educated? Are you committed to freedom for everyone, or just yourselves?

For weeks, I sat on the sidelines. I saw debates on list-serves about whether or not to attend the march, the shade on social media directed at the “white women’s march.” Unconvinced that white women would ever fight for the rights of all of us, many decided to sit the march out.

I decided to challenge myself to be a part of something that isn’t perfect, that doesn’t articulate my values the way that I do and still show up, clear in my commitment, open and vulnerable to people who are new in their activism. I can be critical of white women and, at the same time, seek out and join with women, white and of color, who are awakening to the fact that all lives do not, in fact, matter, without compromising my dignity, my safety and radical politics.

In the end, I joined an estimated 1 million people who participated in the Washington, D.C. march and the estimated 3 million who marched around the world. I have participated in hundreds of demonstrations, but this was one of the first times where I didn’t know or know of most of the people there.

Sandwiched between other protesters like a sardine in a can, I spoke with demonstrators in the crowd who said this was their first time participating in a mass mobilization. I saw people for whom this wasn’t their first time at a demonstration, but who thought that the days of protesting for our rights was over. I asked them what brought them there. They said they wanted to stand up for all of us. They realized that they, too, were under attack. They wanted to live in a world where everyone was valued, safe and taken care of. They were in awe of just how many people were there, just like them, to oppose the values of President Donald Trump’s administration. They wanted to do something besides feel hopeless.

That evening, I participated in a town hall meeting that drew more than 700 people and had more than 1,100 on the waiting list. Those gathered were mostly white, though there were also people of color present. About half the room said that the Women’s March was the first time they’d participated in a mass mobilization. They were willing to learn about how change happens and how they could be involved. And that was just the beginning.

Checking my social media feed that evening, I read comment after comment dismissing the march — an experience that was transformative for hundreds of thousands of people. I wondered what would have happened if, instead of inviting people in, I’d told people to fuck off and go home. Would they come back? Did it matter if they didn’t?

Anger plays an important place in transforming our political consciousness, but it's not enough.

Anger has an important place in transforming our political consciousness, and should be valued as such. The white lady with the pink, knitted “pussy” hat that came to the march was angry as hell when her future president talked about grabbing women by the pussy. Though she may have been sitting on the sidelines up until now, she decided that she was going to do something about it. Anger at the way America depends on immigrant labor yet forces undocumented immigrants to live in the shadows may lead them to join the movement. Black Americans mad as hell about the ways that this country strips us of our humanity might join the movement, even though they didn’t before.

I agree with Solange when she says, “I got a lot to be mad about, and I have a right to be mad.” But that anger is not enough. It is insufficient to build or take power. Anger will not change the fact that Republicans have taken control of all three branches of government and control both chambers of the legislature in 32 states. Anger will not stop vigilantes from terrorizing our communities, and anger will not change an economy that deems too many of us as disposable.

More than a moral question, it is a practical one. Can we build a movement of millions with the people who may not grasp our black, queer, feminist, intersectional, anti-capitalist, anti-imperialist ideology but know that we deserve a better life and who are willing to fight for it and win?

If there was ever a time to activate our organizer super powers, this is it. I’m not going to argue that black people or other people of color need to stop holding white people accountable. White people are not going anywhere, but neither are we if we don’t start to think and do differently.

Hundreds of thousands of people are trying to figure out what it means to join a movement. If we demonstrate that to be a part of a movement, you must believe that people cannot change, that transformation is not possible, that it’s more important to be right than to be connected and interdependent, we will not win.

If our movement is not serious about building power, then we are just engaged in a futile exercise of who can be the most radical.

This is a moment for all of us to remember who we were when we stepped into the movement — to remember the organizers who were patient with us, who disagreed with us and yet stayed connected, who smiled knowingly when our self-righteousness consumed us.

Building a movement requires reaching out beyond the people who agree with you.

I remember who I was before I gave my life to the movement. Someone was patient with me. Someone saw that I had something to contribute. Someone stuck with me. Someone did the work to increase my commitment. Someone taught me how to be accountable. Someone opened my eyes to the root causes of the problems we face. Someone pushed me to call forward my vision for the future. Someone trained me to bring other people who are looking for a movement into one.

No one is safe from the transition this country is undergoing. While many of us have faced hate, ignorance and greed in our daily lives, the period that we have entered is unlike anything that any of us has ever seen before.

We can build a movement in the millions, across difference. We will need to build a movement across divides of class, race, gender, age, documentation, religion and disability. Building a movement requires reaching out beyond the people who agree with you. Simply said, we need each other, and we need leadership and strategy.

We can tell people a hundred times over that because they haven’t been here, they have no right to be here now. But I promise that the only place that will get us is nowhere.