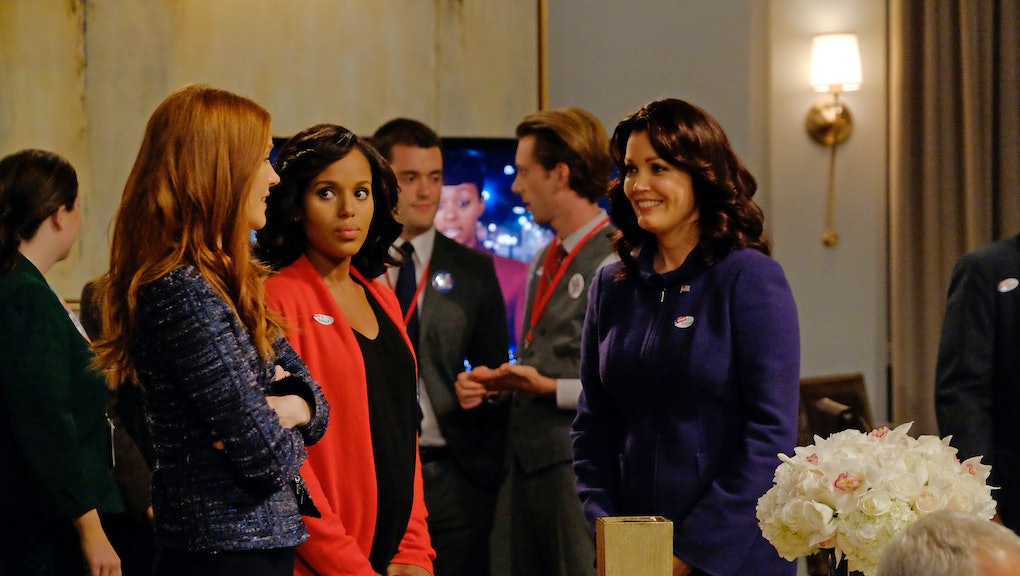 'Scandal' season 6 premiere recap: The 2016 election is nothing compared to what just happened

Sorry, Scandal fans — even on TV, you won't be able to have a female president. Season six of the ABC drama premiered Thursday night, finally revealing who won the presidential election: Governor Frankie Vargas. Yup, Mellie Grant lost the election. But, hey, at least Texas oil tycoon Hollis Doyle didn't win, because that would be way too scary.

Just like the 2016 election a few months ago, the race was tight between Mellie and Vargas. Ultimately, the Scandal election came down to California. And while it looked like Mellie would win the state, Frankie ended up walking away with a majority of the votes to become the 45th president of Shondaland. It's a tough blow for Mellie and Olivia, not just because they won't be returning to the White House, but because "vampire" Cyrus Beene is going to be pulling the strings as vice president of the United States.

Of course, there is a twist. Shortly after Mellie concedes, President-elect Frankie Vargas takes the stage to celebrate his victory — and is shot multiple times. Yes, Scandal went there (again).

This isn't the first Scandal assassination attempt. Fitz was shot in season two. Unfortunately, Vargas isn't as lucky. The first bullet hit his arm. The second bullet hit his stomach. The third? That bullet went through his skull and into his brain. Abby is at the hospital as Vargas flatlines, and that's where the drama truly begins.

Who becomes president now? According to Attorney General David Rosen, the next president could be anyone. Yes, Vargas won the election, which would put Cyrus in the Oval Office. However, the only election that matters is the electoral college, and Fitz has the power to sway its choice.

Now there are two major questions for Scandal to answer: Who will Fitz back? And who is responsible for Vargas' death?

Fitz has Abby confiscate Vargas' wife's cell phone and lock down the hospital in order to buy himself some time. "He isn't dead until I say he's dead," Fitz tells Abby.

He's certainly going to need a lot of time to think. Olivia pays him a visit at the White House to reveal that it was Cyrus who hired the killer. Fitz wants the evidence, which Olivia doesn't have. All she has is a statement from her father — who is not the most trustworthy guy — and video footage of Cyrus taking a step away from Vargas moments before he was shot. Olivia and the Gladiators have until morning to get the proof they need for Fitz.

But at this point, does Mellie even want the presidency anymore? "This place is cursed," she spews at Olivia. And she might be right. While in the White House she lost her son, watched her husband get shot and lost her marriage. Mellie's best bet at happiness might be lying on a beach somewhere. Olivia's not ready to give up though, and after some deep thinking, Mellie realizes she's not ready either. She tells Fitz that she wants the White House.

If only Fitz's decision was as simple as supporting his ex. Olivia goes to the hospital to confront Cyrus only to find him covered in blood and in a complete state of shock. This can't be the look of a man who hired someone to kill his running mate. Realizing that she made a mistake, Olivia goes to Fitz to apologize. It's there that Fitz makes his decision. He can't fix another election. The American people voted for Frankie Vargas and Cyrus Beene, and that's who he's going to back.

As Fitz goes through with the press conference and announces Vargas' death, Olivia and her team make a startling discovery. A voicemail from a Vargas campaign volunteer confirms that it was Cyrus who hired the hit. But that campaign volunteer can't come forward. Huck and Quinn trace her to a cabin in the woods, which explodes while they're only steps away.

So to wrap it all up: Scandal has made history with the first openly gay president — who is also a killer. Who is ready for episode two?