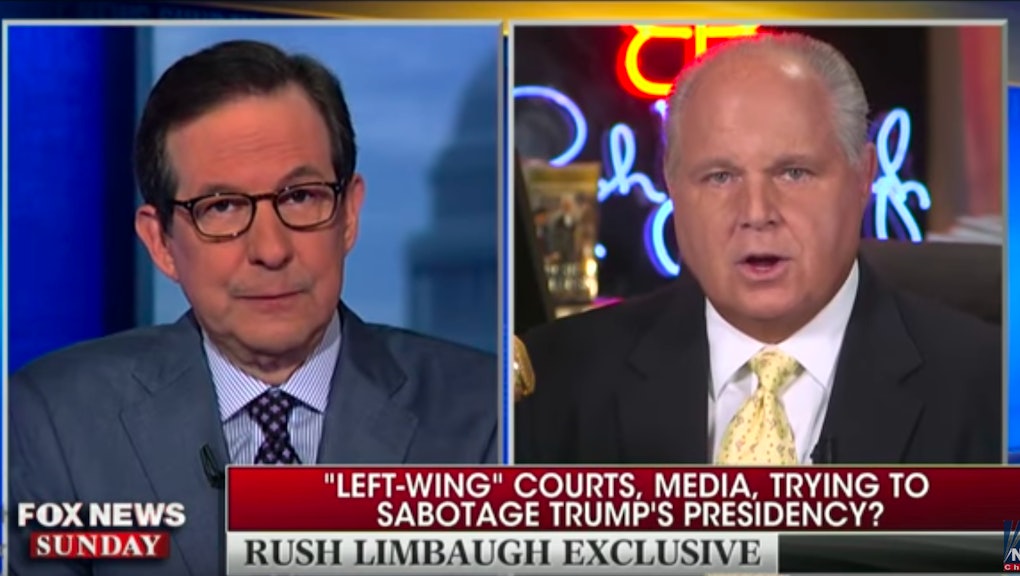 On Fox News Sunday with Chris Wallace, conservative political commentator Rush Limbaugh said former President Barack Obama got "everything he wanted" in the first year of his presidency because lawmakers were afraid of being labeled racist.

"You have the first African-American president," the radio host said in the interview. "You have everybody falling all over themselves to acknowledge that, to reward that. Obama was going to get everything he wanted in the first year, because if anybody opposed it, they were going to be accused of being a racist or a bigot or who knows what."

But Limbaugh's memory seems to have failed him during the interview, as he apparently forgot the famous GOP obstruction that blocked Obama throughout his presidency and the conservative-backed "Birther" movement — propped up by President Donald Trump — that attempted to discredit Obama's entire presidency. GOP leaders also vowed to make Obama a one-term president after Republicans gained control of the Senate in 2010. And then there was the time the Democrat-held Senate roundly blocked Obama's request for $80 million to close Guantanamo Bay in his first year.

What Limbaugh is likely referring to is the fact that the country was in deep economic crisis as Obama took the reigns. Obama passed a series of orders and a successful stimulus package — which Limbaugh says was a failure — to stabilize the economy as quickly as possible. One of the major aftershocks of the Great Recession was peak unemployment in 2010, as unemployment rates hit a high not seen since the 1980s, which Obama also wrangled in by creating thousands of new jobs and cutting official unemployment numbers in half – the "real" unemployment rate dropped below 10% by 2015, after hitting 17% in 2009.

Limbaugh then pivoted on his false claims about Obama to attack the media, specifically "ABC, CBS, NBC, New York Times, Washington Post, USA Today, LA Times, that cadre" for having "a blueprint for destroying Republican political officials they don't like," which Wallace seized on to discuss Trump's recent accusations that the media is "the enemy of the American people."

Limbaugh responded by claiming that during the campaign, Trump explained his policy plans and agenda "more than any political presidential candidate ever has, in my memory." But history remembers differently: During the campaign, Trump's refusal to provide specific policy answers beyond soundbite phrases like "lock her up" and "build a wall" became a hallmark of his campaign to such an extent that billionaire Mark Cuban offered Trump $10 million to provide substance for his declared policies, which Trump never took.