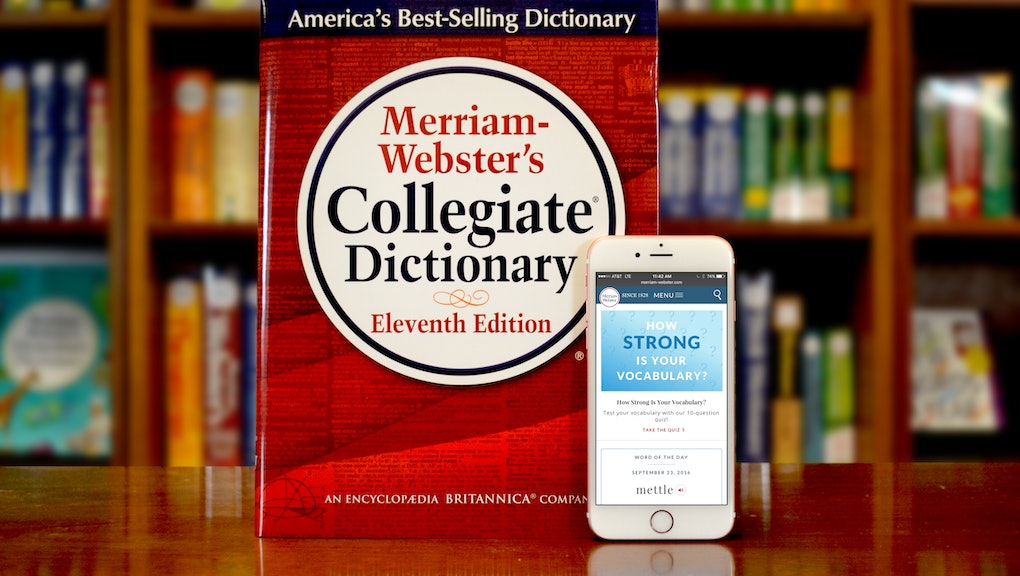 We talked to the genius behind Merriam-Webster's hilariously sassy Twitter

It's 2017, and one of the sassiest voices on the internet is... a dictionary.

In case you're a productive member of society who doesn't spend all their time online, the official Twitter of the Merriam-Webster dictionary has become a viral sensation.

The Twitter account keeps on shading former reality TV star and 45th President Donald J. Trump — and people are here for it.

First, it pointed out that "fascism" was its most frequently searched word in late November.

Second, they mocked Trump for inventing the word "unpresidented" in a since-deleted tweet. (He meant "unprecedented.")

Then, on Sunday, it offered this cutting rebuke to Kellyanne Conway's new catchphrase "alternative facts."

And the next day, the account followed it up with yet another burn — tweeting out the definition of "claqueur" (a paid applauder) after reports that the Trump administration had planted staff to clap during a press conference.

The account has been hailed as a leader of the resistance, and the denizens of the internet have understandably wanted to know: Who is the genius behind Merriam-Webster's Twitter — and will they be getting a raise?

We can't speak to the question of salary, but there is in fact a human being (and not a 939-page printed book) behind the Twitter account. She's a 33-year-old woman named Lauren Naturale.

Naturale, who writes the tweets herself with some creative input from other writers at Merriam-Webster, assured me that the 186-year-old dictionary is a "politically neutral" brand — but that doesn't mean it has to be boring.

Naturale spoke to Mic by email. The following interview transcript has been lightly edited for length and clarity.

Mic: So, how did you land your current job?

Lauren Naturale: I applied on Twitter: Merriam-Webster tweeted that there was an opening for a social media manager, I messaged them with my qualifications, they told me to send a resume, and I ended up here. It gives me hope for social media, because I don't think I would have gotten a call if I'd applied the traditional way — I'd spent the second half of my twenties in an English Ph.D. program at Berkeley, and I didn't have a lot of social media experience. It ended up being a plus: Merriam decided that instead of hiring someone with lots of social media experience and hoping they'd learn more about language, they'd hire someone who already knew a lot about language and hope I could learn social media.

I'm convinced that this is why our Twitter is so popular, by the way. If we weren't geeking out about words for a living, we'd all be doing it for fun. People can tell when you care, and everyone here cares.

What do people say when you tell them what your job is?

LN: After [news site] Ozy.com ran a profile of me in December, I found out from some of my more distant friends that they hadn't realized I worked here. They thought I was posting Merriam-Webster stuff to Facebook all the time because I was some kind of Merriam-Webster superfan. Which I am, but...

Now that fewer and fewer people own physical dictionaries, how do you see your role in keeping dictionaries like Merriam-Webster relevant?

LN: Our job is to be where our audience is. A lot of people still own and continue to buy physical dictionaries, and a lot of people look for our services in various digital formats. Our job is to make sure the public knows about all of these products, and obviously having a lively social media presence helps with that. Since the "fact" tweet, people keep contacting us saying they're going to buy a dictionary, and — yes! Buy a dictionary if you like! But you could also get our app, or subscribe to the Unabridged or just use our free site to look words up. The dictionary is everywhere.

I often hear people saying things like, "OMG who runs this account?" How does it feel to be the mystery woman behind such a popular Twitter?

LN: Sometimes a person I know in real life, or used to know, will tweet that and tag @MerriamWebster, and I will die laughing. But I'm not M-W; M-W is the place where I work, and you see the work of a whole group of people reflected in the things we post.

LN: I think it's interesting that the official POTUS account is explicitly credited to his social media manager, while he continues to post presidential tweets from a second account.

Donald Trump doesn't seem to have very good spelling — think he could benefit from a Merriam-Webster dictionary?

LN: I think everyone could benefit from a Merriam-Webster dictionary.