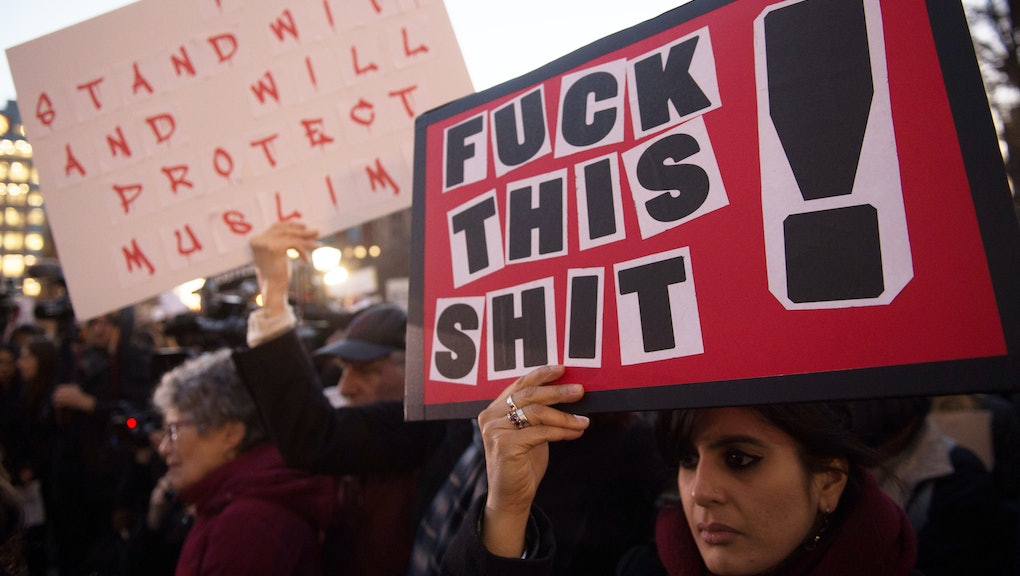 Donald Trump didn’t come up with the list of Muslim countries he wants to ban. Obama did.

President Donald Trump is expected to sign an executive order Friday that would impose a 30-day ban on entry to the United States for visa holders from seven Muslim-majority countries: Iran, Iraq, Libya, Somalia, Sudan, Syria and Yemen.

After word of Trump's pending executive orders spread, the administration faced a lot of pushback — especially the early stages of his Muslim ban.

The executive order is widely viewed as the first step to fulfill a campaign promise to ban Muslims from immigrating to the United States.

"We are excluding certain countries," Trump said of visa issuances during a Wednesday interview with ABC News.

How, though, did the Trump administration choose these seven Muslim-majority countries? The truth is it didn't: The countries were chosen during Barack Obama's presidency.

According to the draft copy of Trump's executive order, the countries whose citizens are barred entirely from entering the United States is based on a bill that Obama signed into law in December 2015.

Though outside groups such as the American Civil Liberties Union and NIAC Action — the sister organization of the National Iranian American Council — opposed the act, the bipartisan bill passed through Congress with little pushback.

At the initial signing of the restrictions, foreigners who would normally be deemed eligible for a visa waiver were denied if they had visited Iran, Syria, Sudan or Iraq in the past five years or held dual citizenship from one of those countries.

In February 2016, the Obama administration added Libya, Somali and Yemen to the list of countries one could not have visited — but allowed dual citizens of those countries who had not traveled there access to the Visa Waiver Program. Dual citizens of Syria, Sudan, Iraq and Iran are still ineligible, however.

So, in a nutshell, Obama restricted visa waivers for those seven Muslim-majority countries — Iran, Iraq, Syria, Sudan, Somalia, Libya and Yemen — and now, Trump is looking to bar immigration and visitors from the same list of countries.

Trump's use of a list created with Democrats' support is obviously geared toward a more nefarious end. A total visa-issuance moratorium is more severe than restricting visa waiver access. But the guilt-by-association of having a higher burden for entry at all underlies the bill Obama signed, too.

And one of the criticisms of Trump's reported proposal for the early stages of his Muslim ban — that it is security theater — is true of Obama curtailing visa wavers. Those restrictions were an early response to the San Bernardino shooting and Paris attacks, but in both cases the assailant were nationals of the countries in which they carried out such violence.

When the Trump administration announced its plans to issue the executive order, Sean Spicer told the White House press pool that people coming from the Middle East and Africa have a "predisposition" for terrorism. The visa waiver restriction, a bipartisan bill Obama signed into law, reinforces that same xenophobic sentiment.