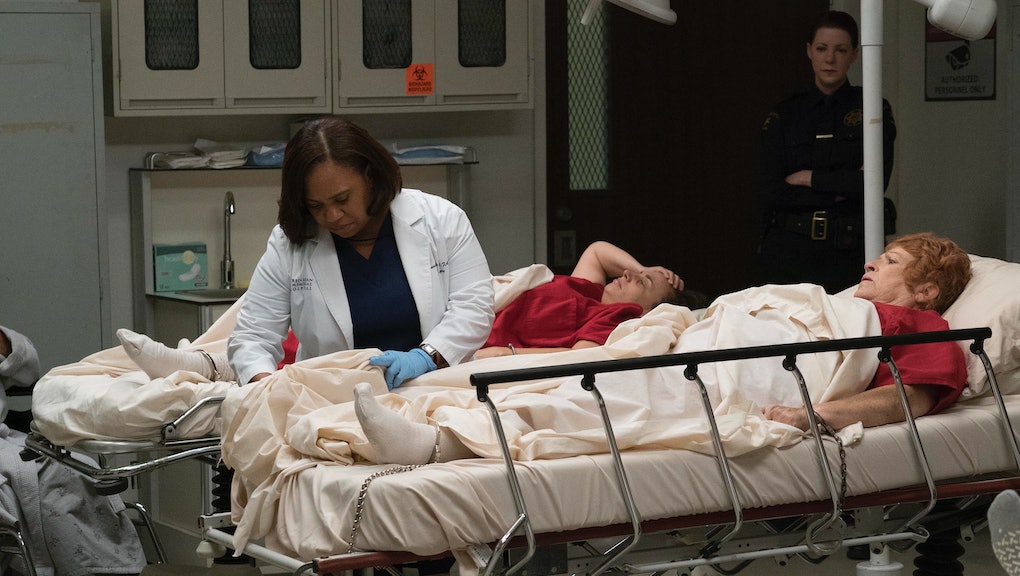 Being pregnant isn't easy. Your body reacts in sometimes shocking ways. Maybe you still have high school or college graduation ahead of you. If you're employed, you could even be fired. There are plenty of reasons why men wouldn't want the dual blessing and burden of pregnancy. Now imagine not only being pregnant but being pregnant in prison.

The 2017 midseason premiere of Grey's Anatomy makes it so you don't even have to use your imagination. In season 13, episode 10 of this Shondaland favorite, the struggles play out right in front of you. This is not an episode about Alex and Meredith. This is an episode about a real social issue that's not discussed enough in public.

Being pregnant in prison is hard

The latest episode of Grey's makes the sacrifices of having a child more obvious — particularly the cases of pregnant prison inmates. The midseason premiere serves as a primer for anyone who hasn't read Sarah Yager's widely touted Atlantic article, "Prison Born" or watched a single episode of Orange Is the New Black. If you never knew that pregnant inmates had it bad, episode 10, "You Can Look (But You'd Better Not Touch)" will make sure you do.

For one, viewers get graphic depictions of pregnant inmate Kristen. They see her as a patient with Miranda, Jo and Arizona at her side. As compassionate as these doctors may be, they can't overstep their welcome. The prison is not their hospital. They cannot control the rules. If they care at all about their hard-earned careers (which of course they do), they must observe the rules.

Observing the rules means shackling a pregnant inmate during any and all procedures relevant to her current state, including ultrasounds. Sure, the doctors protest — especially Miranda — but there's not much they can do. This is not their domain. This is not Grey Sloan. The prison doctor calls the shots, and she's subject to state and federal laws as well as prison rules.

Is it unfair that mama-to-be Kristen Rochester doesn't get to have a second snack when she claims the baby is still hungry? Maybe, but the prison's rules say she gets one snack. That's it, and apparently there's no point in arguing. After all, as the prison doctor shows Miranda, many of the rules are not arbitrary. State and federal budgets dictate what she can and cannot do for her inmates. If there's only enough in the prison budget for a certain number of protein shakes per week, then she can only allot that number of protein shakes. It's not a matter of morals or politics; it's a matter of money. She cannot spend money the prison does not have.

Previously in season 13, Grey Sloan staffers found themselves consumed with interhospital drama. Much of that drama centered around relationships. Was Alex right to defend Jo's so-called honor? Should Meredith have told Maggie what was up between her and Nathan? Should Amelia have told Owen her pregnancy concerns from the get-go? These (and other) questions are the fodder for the kind of gossip that makes Grey's Anatomy so addictive. Sometimes these gossipy situations open up the conversation to larger societal issues. Other times, they're merely petty concerns, however entertaining.

Episode 10 draws Miranda, Jo and Arizona out of Grey Sloan and into a more politically charged environment. Sure, doctors and nurses have their own day-to-day trials and tribulations, the same as employees in any field. But they also face challenges that speak to bigger issues faced by America at large.

Now that President Trump is talking about replacing Obamacare, we as engaged citizens have to ask: How will the Trump administration's health care reform affect inmates? Incarcerated people have health concerns just like other Americans. In some cases, those concerns are even more dire. (Our prisons may even be worsening our country's mental health epidemic.)

But when viewers are simply wondering what consequences Alex will face for beating up DeLuca, they might not consider these larger issues. The less sheltered nature of season 13, episode 10 forces viewers to wonder about them. Doctors are more than intelligent, accomplished and — in the case of Grey Sloan staffers — attractive people. They're people who must accept the realities of living in Trump's America. And like all of us, they must ask themselves: How will we abide by our government's laws, and how will we rebel against them?