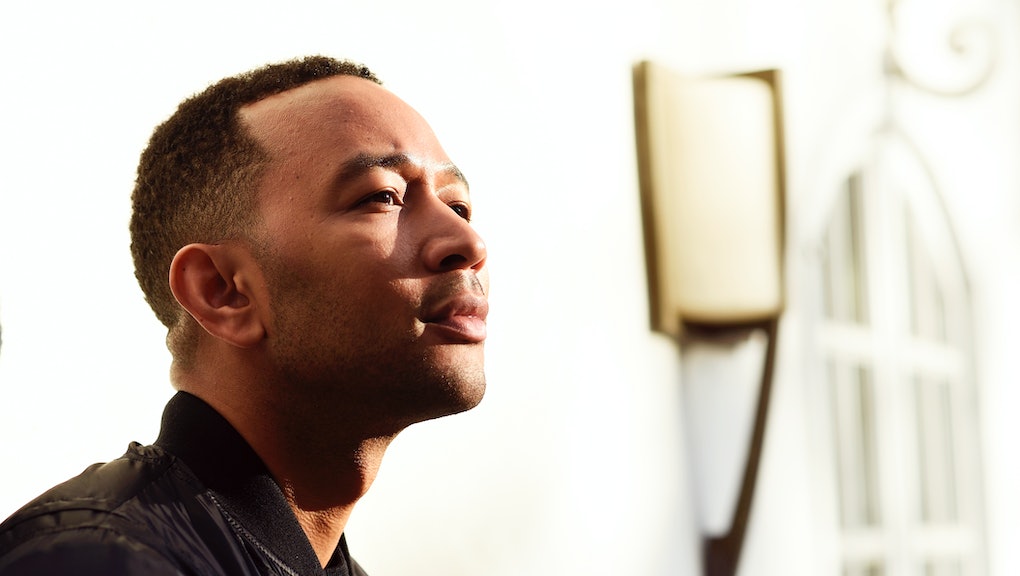 If you need a ballad done right, with a sultry, award-show-ready brilliance, you call one man. If you need someone to help articulate the inherent racism of the drug war and the ways in which mass incarceration jeopardizes our country's shared future, you call the same man — John Legend.

Few artists today have realized the transformational, political power that music and celebrity can provide to the same extent as Legend. Little about his songs outwardly position themselves as music for the resistance in the way Kendrick Lamar's "Alright" or even Beyoncé's "Formation" do. But look past the pressed suit and coffee shop cosigns, and the 10-time Grammy Award-winning soul singer's catalog absolutely teems with gospel-inspired calls for resilience. His activism, best seen through the Free America project, is backed up by knowledge of the issues at hand, rather than just convenient talking points.

In many ways he's set the mold for the Beyoncés and Katy Perrys of the world — pop stars with deep political convictions, slowly becoming more outspoken in their desires to see the world change. The role of this new breed of celebrity has been under the crosshairs throughout 2016 and into the New Year, criticized by President Donald Trump and his supporters for sowing more discord and hailed by left-leaning leaders for helping translate their values to fans.

Legend chooses to see this new level of scrutiny as an opportunity.

He's an obvious choice to score the debut ad of LIFEWTR, a new water premiering during the Super Bowl that will seek to highlight and support emerging artists. Their label designs will offer artists, such as Jason Woodside, MOMO and Craig & Karl, opportunities to get groundbreaking attention for visual art from individuals outside the gallery circuit.

Mic spoke with Legend about this collaboration, as well as about the controversies surrounding the record-breaking La La Land (Legend is an executive producer and star of the film) and what role artists will play in the Trump years.

Mic: Tell me about LIFEWTR: How did you all connect and what speaks to you about the project?

John Legend: Well, I love the emphasis on creativity and inspiration and particularly on art. All the bottles will have art from emerging artists, and I think that's pretty cool. They reached out to me because they want to collaborate on this very first commercial of theirs with my song "Love Me Now," with an emphasis on what it means to be inspired. We felt like it was a good combination, the music and this brand.

That's interesting. We're 26 days into the month, six days into Trump's presidency, there's been so much talk about the role that artists are taking in the transition. What part will artists play in the next four years?

There was a Donald Trump tweet during the Women's March after the inauguration where he said "celebs hurt cause badly." Do you feel that was fair? Do you feel all the criticism surrounding artists and the roles they've been assuming is justified?

JL: No. I believe artists are citizens like everybody else and we have the right to have our voice be heard. It's always ironic when the guy who's the head of Celebrity Apprentice talks shit about celebrities being involved in politics. I mean, he's not the best businessman, he's known for being a celebrity businessman, one who plays one on TV. He obviously knows the power of celebrity or he wouldn't be president.

I remember your comments after seeing Kanye West meet with Trump. You said it was "very disappointing" and "a publicity stunt." I wanted to know if your feelings have changed at all following the inauguration and other events.

JL: I felt like what was reportedly a 10-15 minute kind of meet-and-greet, was more of a publicity stunt than an actually substantive meeting. But I do believe that people that oppose the president or any politician should take an opportunity to meet with them under the right conditions. If they think they can influence policy and change the conversation and move things in the right direction. I don't think it's wrong to meet with people you disagree with.

I want to congratulate you on the success of La La Land, it's incredible. I want to read you a quote, from Rostam Batmanglij of Vampire Weekend: "Black people invented jazz, but now we need white people to come save and preserve it. Sorry, this narrative doesn't work for me in 2016." How do you respond to that?

JL: Well, black people certainly did invent jazz, and there's a lot of wonderful black jazz musicians playing right now, and a lot of wonderful jazz musicians of other races playing right now. I don't think it should be the responsibility of one film to tell the overarching narrative of jazz. If we were relying on La La Land to do that, then clearly it doesn't tell the full story of jazz. But a filmmaker portraying a certain point of view, their perspective, then it's OK that it doesn't incorporate every perspective.

The only way it would be a shame is if it were supposed to be a representation of all jazz and all things jazz, but I think it's more from [director Damien Chazelle's] point of view. This is the story he wanted to tell. Because it's gotten so big, it's gotten that added pressure on it to be the jazz film, and if it is the jazz film, then it does underrepresent the influence of black people. But if it's just a great film from one filmmaker's point of view — it's great at doing that.

Keeping with the awards season theme, I'm curious as to what you thought about Frank Ocean's decision to boycott the Grammys, so to speak, by not submitting his album. He was saying the Grammys have inaccurately represented black music throughout its history. How did that resonate with you?

What do you feel your next steps are? I've seen a stark divide in the way people are responding to the news. It's either a crippling paralysis and inability to process what's going on, or a really powerful inspiration.

JL: I go back and forth. Sometimes I'm really upset and I feel like I'm so inspired to do something, and then part of me still has this sense of exasperation and hopelessness. You see how many lies are told every single day and it's like, how do we combat it if there's not even an agreement on what's actually a true statement? Like, we can see a picture of an inauguration, like, how can you try to say that up is down? Or black is white? Like, how can you say that?

It gives me a sense of despair in some ways. The man in charge of the country is saying up is down and black is white every day. It's like, how do we beat this?

The rise of the Black Lives Matter movement has really changed the way that musicians speak through music. I wanted to know if you felt any of that as you saw the movement take shape. Black music has really responded to the aesthetics and values. How have the two interacted in your mind?

JL: Black music has responded definitely. We weren't the originators; the people in the streets were the originators. We took their lead and responded to it. I've been pretty politically involved my entire career, fighting for justice movements and equality movements, but in general I think a lot of artists weren't making a lot of art that spoke about these things, until the people pushed them in that direction, which is fine. Artists responding to the times and the conditions on the street and making great art about it. And I think it's been a great year for art and black music because of it.

Let's hope it continues. Do you think it will?

JL: Yeah, I do. I think it's got something new to respond to now, which I think will motivate artists to speak out.