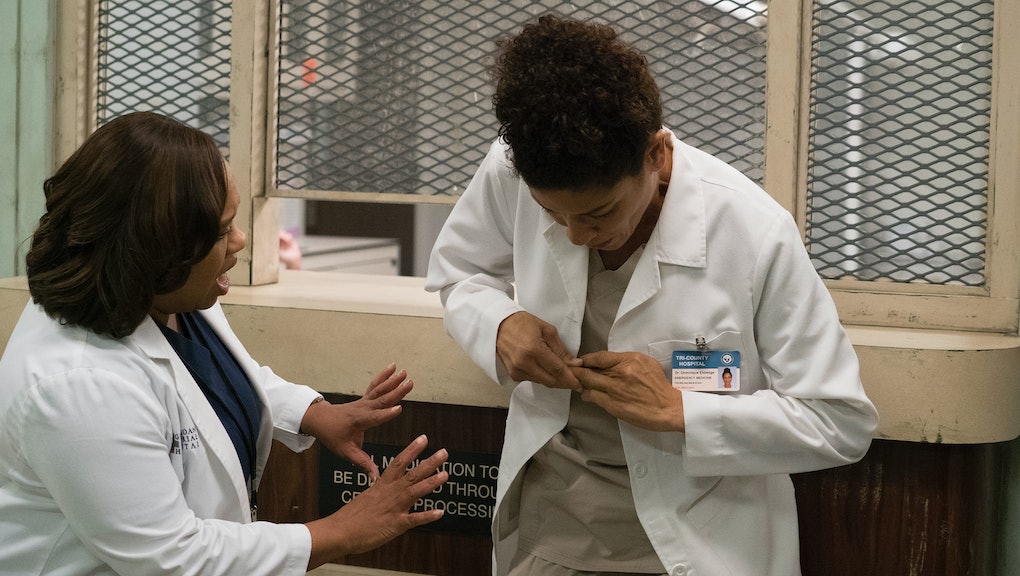 The sentiment behind adoption is a beautiful one: Someone brings home a child to love and have in their lives forever. A child whose biological parents may not be able to raise them gets a home where they are comfortable and safe.

But the realities of adoption make the process more complex and perhaps slightly less charming than many Americans realize. The winter premiere of Grey's Anatomy, which aired on Thursday, hinted at just how complicated the adoption process — however necessary its logistical hurdles may be — really is.

In season 13, episode 10 of Grey's Anatomy, viewers find Miranda, Jo and Arizona in a maximum security prison. The doctors are there to care for Kristen, a pregnant 16-year-old girl, and her unborn baby. This episode carries a lot more social heft than usual.

As the story progresses, we learn that the inmate has made an adoption plan and that her child will go live with the biological grandmother. Sounds simple, right? Mom will take care of it. No, it's not that easy — and that's exactly what this episode illuminates.

Kristen's mother is, understandably, upset that her daughter is in prison. But more than that, we see that she's angry, even spiteful, toward Kristen. In fact, Kristen's mother is so furious that she refuses to go to the cell where the doctors are treating Kristen. Kristen repeatedly asks for her mom, saying that the law allows her to have her mother present so she can hold her hand and put her at ease.

When her mother doesn't come to the room, Kristen thinks the doctors are denying her this legal right. Eventually, they inform Kristen that her mother is at the prison but does not want to join her. She has come for her granddaughter, not Kristen. Not such a cheery depiction of an often romanticized institution.

In real life, family drama plays a big part in many adoption cases. Even when grandparents adopt their grandchildren, things can get messy. As adoptive parents, grandparents have full authority over their grandchildren because they are considered the permanent legal parents. Thus, the children's biological parents lose all rights to the child and therefore cannot request custody later on.

But emotions are unpredictable. What if someone like Kristen completes her prison sentence and decides she wants her child back? Informally, she could raise the child with her mother's permission — but legally, the child's grandmother will always be the child's parent. That means that Kristen's mother would be the one authorized to enroll the child in school or obtain medical records. Kristen would not have those same rights and responsibilities.

With Kristen's mother being resentment toward her daughter, as we witness in episode 10, it's unlikely she would allow Kristen to be involved in her biological child's life — and legally, she calls the shots.

With the Trump administration poised to restrict women's abortion rights, it's important to be honest about adoption. There are many children who benefit from adoption. Take U.S. Olympic gymnast Simone Biles, who was adopted by her grandparents, as a recent example. But that doesn't mean life is a cinch for adopted kids and their adoptive parents. Parents have to deal with legal and family drama, while both adoptive parents and adopted children still face social stigma.

Add race to the equation and adoption gets even more complex. Strangely, it's cheaper to adopt a black baby than a white baby. Further, children adopted by parents of a different race often grapple with psychological and cultural discomfort.

None of this is to say that Americans need to nix adoption. It's to say what show creator and real-life adoptive mother Shonda Rhimes seems to be saying in this episode of Grey's Anatomy: Let's not pretend it is a smooth and effortless solution.