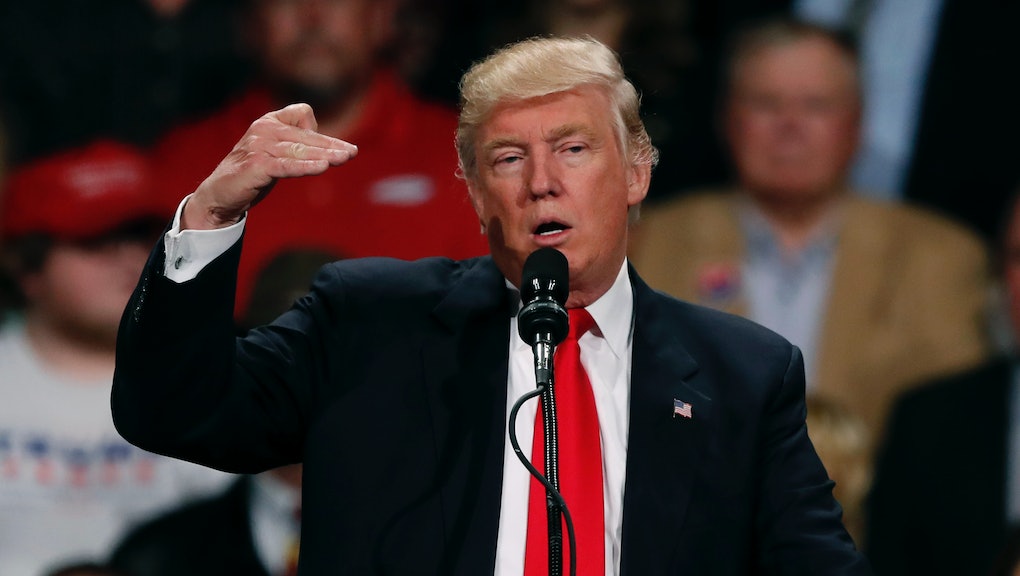 Trump wants to grow our economy and deport millions of undocumented immigrants. He can't do both.

The U.S. economy grew by 1.6% in 2016, according to data released by the Department of Commerce Friday.

Though this level of growth is sound for an economy entering its seventh year of recovery, President Donald Trump has pledged to double GDP growth to 4%, returning the country to the boom years of the 1990s.

In his inaugural address last week, Trump doubled downed on this commitment with a tailor-made message for the white nationalists in his party, saying that economic policy would be “made to benefit American workers and American families” and promising that in all matters he would put “America first.” Trump’s wealthy nominees Steve Mnuchin and Wilbur Ross for Treasury secretary and Commerce secretary, respectively, both reiterated the 4% pledge during their confirmation hearings.

But 4% growth will be nearly impossible if Trump makes good on his promise to deport the country’s estimated 11 million undocumented immigrants. The truth is that the deportation scheme Trump laid out earlier this week would wreck the economy, because the U.S economy depends on undocumented immigrants. Consequently, broad-based economic growth and a deportation plan fueled by white supremacy are simply incompatible.

Undocumented immigrants contribute about $250 billion each year to the nation’s economic growth and close to $12 billion in state and local taxes.

Trump rose to power by appealing to economic anxiety and nativism from the get-go The vivid launch of the president’s campaign on June 16, 2015 included the false declaration that Mexican immigrants were bringing drugs and crime to the U.S., and that they are rapists. He went on to say that he alone would end this migration by building a wall paid for by Mexico. In August, Trump capped it all off, remarking that all those in the United States without documents “have to go.”

Trump’s jingoistic economic rhetoric and his xenophobic attacks were a ready-made appeal to white supremacists, who cheered his win. The head of the Arkansas Klu Klux Klan, for example, said that the Nov. 8 result showed voters rejected “leaving our own border unsecure” as “the liberal agenda, free trade and over regulation robs them of jobs and opportunities.” For Trump supporters, white supremacy and economic growth go hand in hand. According to the Pew Research Center, the president’s voters were more than three times more likely to view immigration as a very big problem, with more than 1 out 3 believing that “undocumented immigrants take jobs U.S. citizens would like to have.”

But undocumented workers are pivotal to America’s economic growth.

Undocumented immigrants contribute nearly $250 billion each year to the nation’s economic growth and close to $12 billion in state and local taxes. They keep Social Security afloat — more than $1 out of $10 in the Social Security Trust Fund is there because someone undocumented put it there.

Deporting all 11 million people, on the other hand, would demolish economic growth by removing up to nearly $3 trillion of goods and services over 10 years, causing the federal budget deficit to skyrocket with nearly $700 billion in deportation costs alone.

Even the assumption of a moderate level of deportations, close to nearly 3 million people, would push the economy into a spiral. The conservative-leaning American Action Forum places the drag on the economy with this number of deportations that's nearly equal to the Great Recession.

If Trump wants to reach his 4% target, the best thing he could do would be to offer undocumented legal status. Analyses by liberal think tank the Center for American Progress and the Bipartisan Policy Center show that granting undocumented legal status would add $1.5 trillion to the U.S. economy over the next 10 years. A more shocking way to put it is that if Donald Trump championed immigration reform rather than an immigration regression, the economy would grow sufficiently to put him essentially halfway to his 4 percent goal, achieving close to 3% by 2021.

These numbers show that white supremacy and a strong economy for all can’t both happen at the same time. Judging by the popular vote, most voters seem to know this. That’s why they embraced their own economic well-being above white fear. The only question is whether the president will ever choose to follow suit.