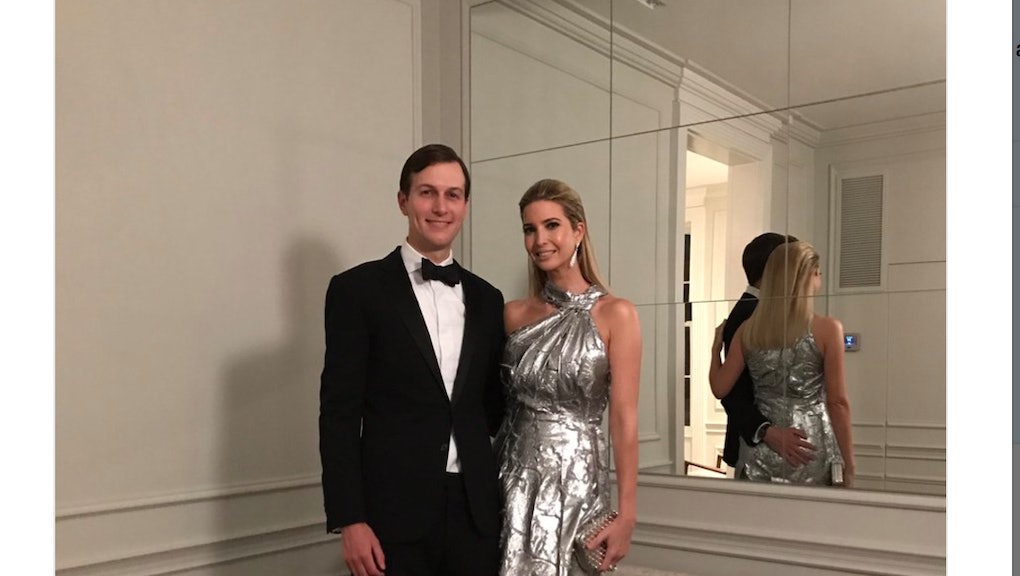 Ivanka Trump on Saturday posted a photo of herself and her husband, senior White House adviser Jared Kushner, decked out in formal wear — as immigrants with legal paperwork were detained at airports across the country thanks to her father's Muslim ban.

Her tweet had no text. It was merely an image of her smiling and decked out in what appears to be a $4,990 metallic evening gown as thousands of people protested across the country against the detaining of refugees and legal permanent residents — including infants and elderly people upwards of 70 years old — thanks to her father's executive order.

What's more, her husband — a top adviser to President Donald Trump — is also smiling as if nothing were wrong.

Kushner should know a thing or two about being targeted simply for religion. His grandparents were Holocaust survivors, taken from their homes and forced to survive inhumane torture simply because they were Jewish.

Yet there he was, smiling from ear to ear as people who had been vetted and had the legal paperwork to enter the country were detained in airports simply because of their country of origin.

Ivanka Trump's tweet was met with disdain and mockery by other Twitter users, who pointed out her lack of empathy.

"Today? This is your tweet Today?" one user replied.

Others pointed out the hypocrisy of posing as if nothing were wrong, accusing her and her husband of forgetting the horrors of the Holocaust just a day after Holocaust Remembrance Day.

"U know all that 'we know the heart of the stranger for we were strangers' stuff in Torah. This is what forgetting looks like," Peter Beinart, a contributing editor at the Atlantic, tweeted.