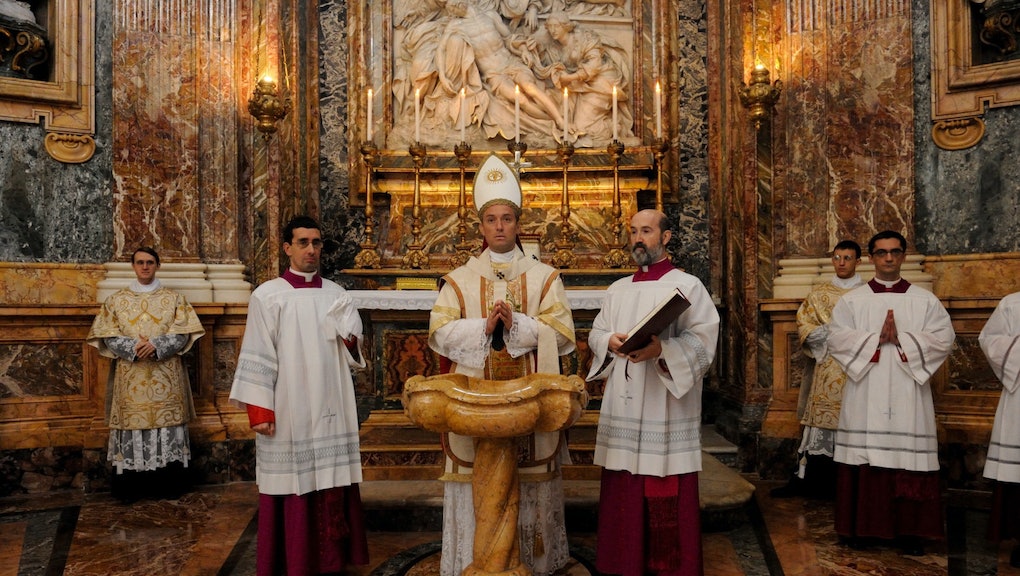 While the internet seems to have subsided from its memes of The Young Pope in favor of things like Winona Ryder making a great many faces at the SAG Awards — which is totally understandable — we urge you to fetch some holy water and run to your keyboard one last time, because what happened in the show's fifth episode is quite unbelievable.

What if we told you The Young Pope was soundtracked by LMFAO, if only for a minute?

Yes, this really did happen on the show, and because it was already released in Europe, videos of Pius XIII putting on his papal swag to address the cardinals are everywhere on YouTube. The thing is, we'd understand if said videos — set to LMFAO's "Sexy and I Know It" — didn't seem legitimate, as if each YouTuber unanimously (and correctly) decided that The Young Pope would be better if it were dubbed by the DJs whose individual names are Redfoo and Sky Blu.

But that's the brilliance of The Young Pope: The show is wholly committed to its weirdness, and the Twitterverse was once again in awe.

Also, just look at this outfit. This is the outfit of a pope who could listen to LMFAO unironically.

What's perhaps most jarring about the entertaining dressing montage is what follows it. Pius XIII's address to the cardinals is one of the show's best scenes, and it's terrifying. He lays down the law of what should be expected from the cardinals (total devotion to him) and how they need to treat the public (be inaccessible).

He's echoing the very timely "Make Vatican City Great Again" rhetoric he already showed the public en masse, and any efforts to undermine Pius XIII by Cardinal Voiello have been swiftly undercut. The latest, per episode five: Voiello tries to blackmail Pius by photographing him with Esther, the beautiful wife of a Swiss Guard member. He gets the image he wants — Pius reaching out and touching her breast — but decides he shouldn't follow through with his plan after Pius elicits a saintly response to Esther's advances.

So, blackmailing the Holy Father with a sex scandal won't work, he's a kangaroo whisperer and he may be more handsome than Jesus. However, the most absurd part of The Young Pope could be a very real truth hidden behind its eccentricities: What if Pius XIII really is a saint?

As Esther and Pius XIII hang out in the Vatican garden — and we kid you not, the pope's beloved kangaroo appears and jumps when he commands it to, which excites him greatly — Esther apologizes for her role in potential papal blackmail. He forgives her, and once a flower begins to ripen next to her as the sunlight touches it, she realizes her infertility is finally over. Her prayers were answered: She'll finally receive a child.

Is that the pope's doing? WELL. Episode four did have what the Cut accurately called a "prayer orgasm," in which Pius XIII prayed for Esther to bear a child while she was having sex with her husband (it was as weird as it sounds). So sure, why not?

Basketball aficionado Sister Mary, for her part, has always intimated that Pius XIII — or Lenny, before he was elected pope — could be a saint. And halfway through the first season, nothing's off the table. He really could be a saint. After all, we're not dealing with an ordinary, old pope.

This pope is young, and this pope can jam to LMFAO. God bless.