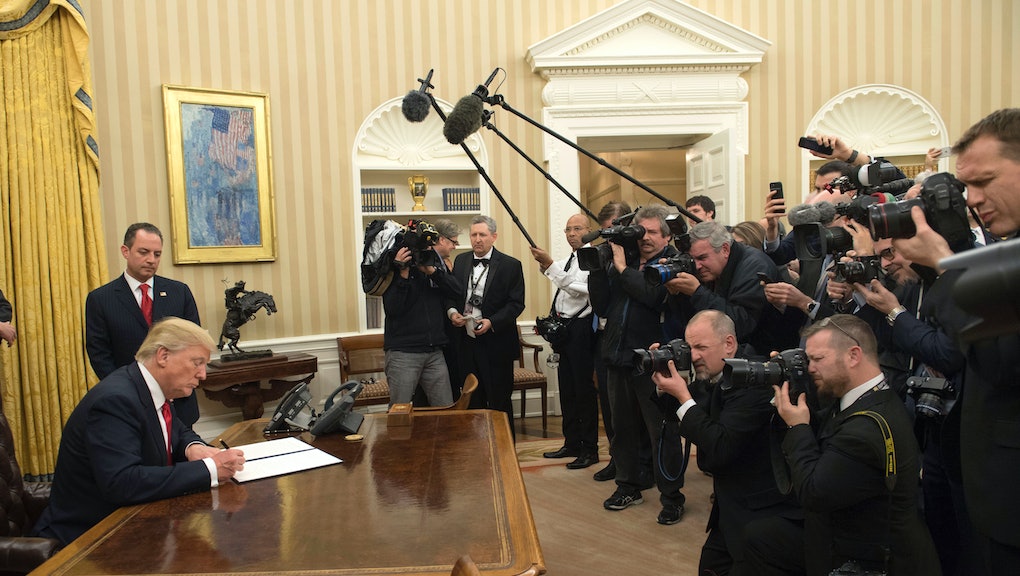 President Donald Trump signed an executive order on Monday requiring the government to scrap two existing regulations for any new one enacted during his term, according to a CNBC report.

After signing the order, Trump told reporters that it was "the largest ever cut by far in terms of regulation," adding that "there will be regulation, there will be control, but it will be a normalized control."

“We don’t need 97 different rules to take care of one element,” Trump told a group of business owners Monday, according to the Wall Street Journal. It's unclear exactly which regulations are on the chopping block, although Trump's recent promise to reign in "out of control" environmentalism provides a clue.

The move is likely to mollify a business community that has been lashing out against Trump's executive orders over the weekend that placed travel restrictions against seven Muslim-majority countries.

As Matt Levine noted for Bloomberg, many of Trump's corporate supporters expected the president to eschew some of his campaign promises that were seen as bad for business.

Instead Trump has offered robust protectionism along with messaging on tax reform that many found confusing.

The announcement on regulations is likely to please members of the small business community, a selection of whom surrounded the president as he made the announcement.

Proponents of regulatory reform argue that government regulation places an unfair burden on smaller companies, since they don't always have the same resources as larger ones to ensure compliance.

First, many regulations are in place for good reason — from protecting consumers from unsanitary food handling processes to keeping minors from buying cigarettes.

Second, there's good reason to think Trump won't be able to live up to the sweeping promise.

While the president does have pretty wide-ranging power to direct federal agencies under his control, getting rid of old regulations is a little more complicated.

As political science professor Gregory Koger told the conservative-leaning Washington Examiner, getting rid of old regulations without the help of Congress requires setting up a new regulation that negates the old regulation.

Couple that with a lengthy review process, and experts note that scrapping all the regulation Trump wants to scrap could take years.