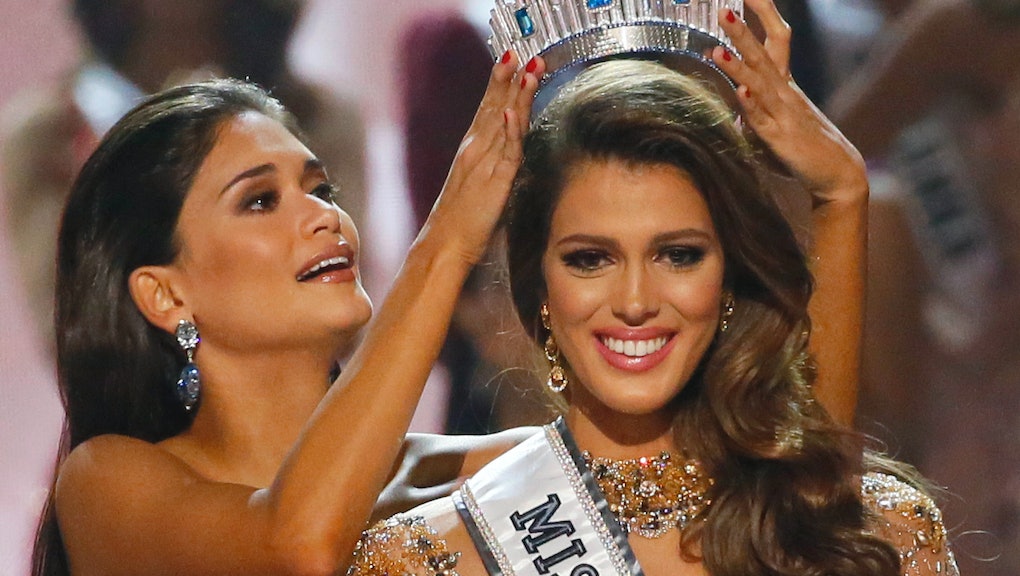 The possible mistranslation of Miss France's answer to the final Miss Universe question has spurred controversy on Twitter, where some users are saying Iris Mittenaere — who was crowned Miss Universe on Sunday — was misquoted.

When many people think of Miss Universe, they picture sexy swimsuits and sparkly evening gowns fit for royalty. Yet the pageant also includes a personality interview, a segment that gives viewers a chance to learn more about the contestants as people. In a pageant previously co-owned by Donald Trump and one criticized for sexism, racism and body-shaming, the competition's personality interview matters.

Still, as important as it is to remind viewers the contestants are worth more than their looks, the interview segment poses a challenge for pageant producers. After all, the contestants come from all over the world and not all speak fluent English. This language gap requires the use of live interpreters.

But did Mittenaere's interpreter correctly translate her answers?

Some Twitter users are complaining Mittenaere's words were not properly interpreted during her final interview question.

Mittenaere was asked to "name something over the course of your life that you failed at and tell us what you learned from that experience."

Here's how her answer was interpreted onstage, according to Angelopedia:

I've failed several times in my life, so I thought that I failed the first time that I went out on a casting, because my name wasn't on the list. The very next day, I found that I was in a new book. So I think that when you fail, you have to be elevated, you have to try again, and keep going. If tonight, I'm not one of the winners, I will still have the great honor of being one of the three finalists, so I think that I have failed before, but I think this is a great first opportunity.

One of Twitter's most notable translation critics was Filipino actress Solenne Heussaff:

Heussaff's brother, Erwan Heussaff, took it one step further, tweeting his own translation of Mittenaere's answer:

Here's what he wrote:

At her first press conference as Miss Universe, Mittenaere defended her interpreter. However, she did clarify that she said medical school, not casting, in her interview answer.

The challenges of interpretation

Interpretation, while critical to a multilingual world, is an imperfect art. Language is complex, context is crucial and cultures have different ways of capturing certain concepts. In hospitals, a mistranslation can cost a life. The same goes for court interpretation. And if you ever thought robots could eliminate human error, you should know auto-translation software still has miles to go.

Now take all the normal challenges of interpretation and add the pressure of live television. It's easy to see why Miss Universe's live interpreters would get nervous and possibly even make mistakes.

Technically, the only requirements for Miss Universe involve age and pregnancy. Contestants must be between the ages of 18 and 28. They also cannot be married, pregnant or have given birth to a child.

Still, even if there are no restrictions regarding height or weight, the contestants generally fit certain standards. Otherwise, Miss Japan's complexion or Miss Canada's size would not have been worth noting in mainstream and social media. For the pageant to really be more than a display of female objectification and an exercise in body-shaming, it needs to evidence diversity — not just a diversity of looks, but a diversity of talents and opinions.

When Miss Universe contestants speak, viewers owe them the respect of listening — just as they listen to co-host Steve Harvey, who was surprisingly invited back for Sunday's competition despite his previous crowning flub. The woman who wins the crown spends an entire year making public appearances, including countless speaking engagements. Thus, it matters how a non-English-speaking Miss Universe is interpreted for the general public.

After all, a big part of Miss Universe's job involves choosing and advocating for a social cause. Mittenaere, for instance, has chosen to focus on oral hygiene for her awareness campaign. Who knows what the student of dental surgery could do to change public health? Hopefully, accurate interpretation will facilitate that end.