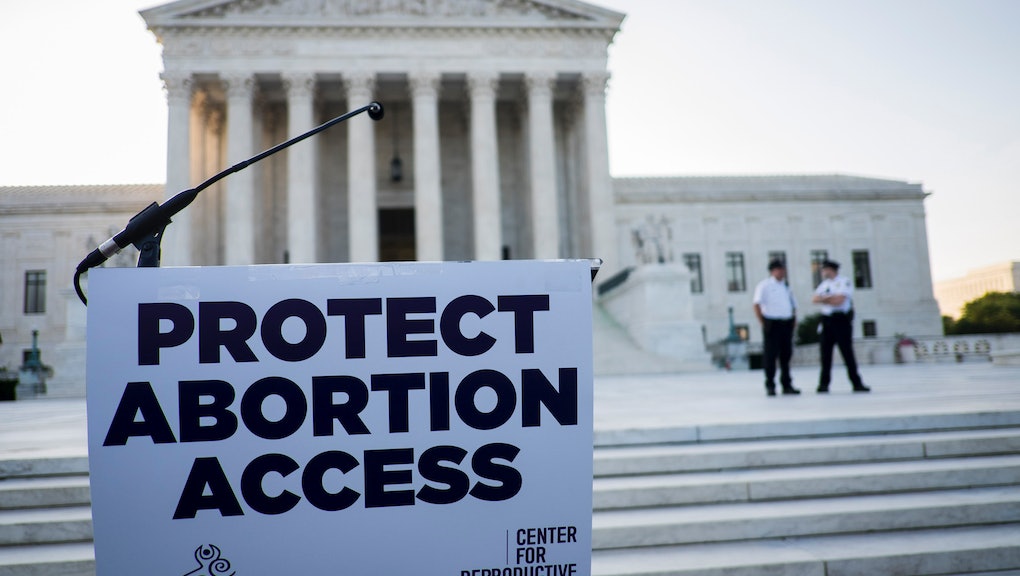 On Friday, President Donald Trump tweeted that the anti-abortion March for Life had his "full support."

However, that wasn't always the case. Trump, who now claims to be staunchly anti-abortion, has only taken on these views in recent years and was previously in favor of reproductive rights.

Here's a breakdown of Trump's ever-changing abortion views over the years.

In the 1980s and 1990s, Trump — then best known for his real estate empire — was firm in his pro-abortion rights stance.

Trump's connection to abortion rights dates back to 1989, when he co-sponsored an event at the Trump-owned Plaza Hotel honoring Robin Chandler Duke, the president emeritus of the National Abortion Rights Action League. The New York Times reports that Trump did not attend the event himself, potentially due to death threats against Trump and his family that were called in by anti-abortion advocates.

In 1999, Trump explicitly expressed his pro-abortion rights views on Meet the Press, telling host Tim Russert that he was "very pro-choice."

When Russert pressed Trump on whether he would ban partial-birth abortion, Trump responded, "No. I am pro-choice in every respect, and as far as it goes, but I just hate it."

According to the Daily Intelligencer, Trump told reporters in 1999, "I want to see the abortion issue removed from politics. I believe it is a personal decision that should be left to the women and their doctors."

In his 2000 book, The America We Deserve, however, Trump changed his mind about partial-birth abortion:

I support a woman's right to choose, but I am uncomfortable with the procedures. When Tim Russert asked me on Meet the Press if I would ban partial-birth abortion, my pro-choice instincts led me to say no. After the show, I consulted two doctors I respect and, upon learning more about this procedure, I have concluded that I would support a ban.

Between 2000 and 2011, Trump's views on abortion evolved even further. In a 2011 interview with the New York Times, Trump, who was then first toying with a presidential run, came out as being anti-abortion. He said:

There are certain things that I don't think can ever be negotiated. Let me put it this way: I am pro-life, and pro-life people will find out that I will be very loyal to them, just as I am loyal to other people. I would be appointing judges that feel the way I feel.

Trump further clarified his evolution from pro-abortion rights to anti-abortion during a Republican primary debate in Aug. 2015.

Trump credited friends of his as the reason for his change of heart.

What happened is friends of mine years ago were going to have a child, and it was going to be aborted," Trump said. "And it wasn't aborted. And that child today is a total superstar, a great, great child. And I saw that. And I saw other instances. And I am very, very proud to say I am pro-life.

While Trump has since remained committed to his anti-abortion standing, his more specific abortion views have sometimes wavered. In March 2016, Trump drew ire from Americans when he said that there should be "some form of punishment" for those who get an abortion.

Trump's opinions on abortions got further muddled after his statement and the outcry that ensued. In response, the then-candidate first issued an informal statement relayed by journalist Ali Vitali, which said that "the issue is unclear."

Trump then walked back his comment on women being punished with a more official statement that offered a different view. The statement explained that doctors — not women, as he'd initially stated — who should be punished if they perform an illegal abortion.

Though Trump remains anti-abortion, he has spoken out in favor of exceptions in the case of rape, incest and the life of the mother, saying he would "absolutely have the three exceptions" in an April 2016 Today Show interview.

In an Aug. 2015 appearance on Meet the Press, Trump told Chuck Todd that he favored abortions in cases where the mother is "close to death," but not when she "has a cold."

"I'm talking about death," Trump said when Todd asked about abortion in the case of reproductive health. "If the mother will die and we're going to know that. The problem with [saying health] is, what, you have a cold and you're having an abortion?"

"The laws are set now on abortion and that's the way they're going to remain until they're changed," Trump said in an interview with CBS in April 2016. "I would've preferred states' rights," he added. "I think it would've been better if it were up to the states. But right now, the laws are set... At this moment, the laws are set. And I think we have to leave it that way."

Following his comments, which sparked criticism from anti-abortion advocates, spokeswoman Hope Hicks clarified that Trump's views would change if he ascended to the presidency.

"Mr. Trump gave an accurate account of the law as it is today and made clear it must stay that way now — until he is president," the statement said. "Then he will change the law through his judicial appointments and allow the states to protect the unborn. There is nothing new or different here."

Now that Trump is in the Oval Office, we'll have to see if this will be the time he sticks to his word.