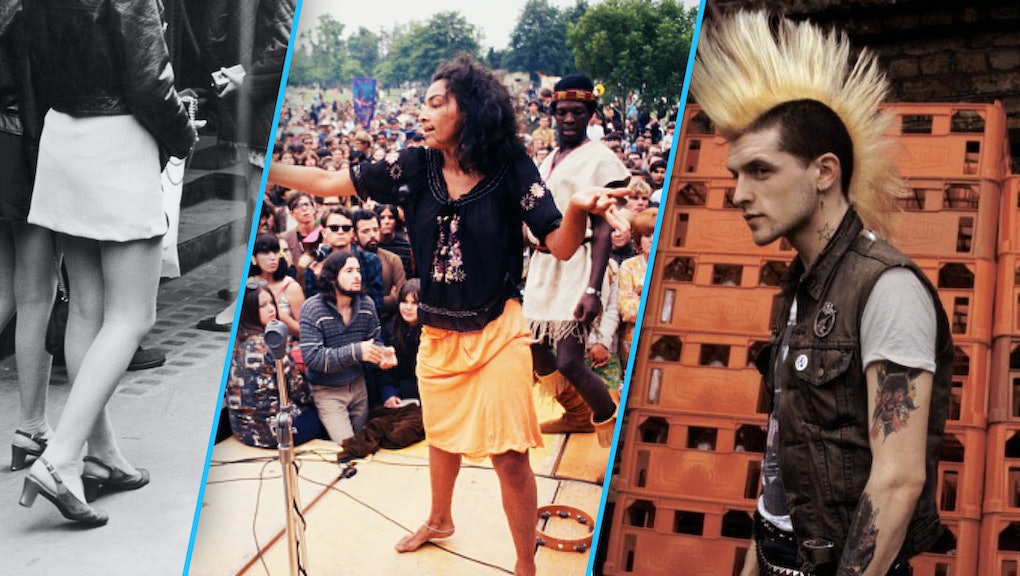 The Donald Trump administration has not just given birth to a new level of anxiety, fear and uncertainty in America, but also a new age of fashion. Not only have designers been forced to speak out about the political climate in both words and on the runways, but trends have already been born.

A pink hat knit to look like a cat — or pussy, more appropriately — is now a must-have accessory. Feminist T-shirts that give back to organizations like Planned Parenthood are flying from the shelves of the internet. People and even designers are reacting, and they're using clothing and accessories to show it.

Though these next few years may seem wholly unpredictable, when you look back at certain intense periods in recent history — namely the 1920s, '60s and '80s —  2017 is far from the first time that politics has had an affect on fashion. So here's a look back at some of the more notable times the times were a-changin' and the clothes were too:

With the 19th Amendment giving women the right to vote in 1920 and the Equal Rights Amendment proposed in 1923, as Smithsonian notes, women were clearly trying to situate themselves into a freer, more expressive place in American society at this time. And fashion showed just that.

With women's rights ever so slowly gaining momentum in America, fashion reacted by giving women's clothing more freedom as well. During this time, not so coincidentally, the silhouette of trendy dresses loosened, with lowered waistlines and shorter skirts. Flappers, the socialites at the time, ditched their stockings to proudly flaunted their ankles, which was once taboo.

A more autonomous woman called for a looser dress code, and fashion offered just that. The next time we'd see this level of politically-motivated shift in women's fashion would come 40 years later, in the 1960s.

Much like the 1920s, the 1960s were a decade of public calls for equality for women, with the birth control pill's increasing popularity and women entering the workforce during this era. And like the 1920s, fashion reacted with shorter skirts, which signaled a woman more liberated and uninhibited by her choices. But rather than just daring to show their ankles, like in the 1920s, these women were daring to show their knees — and sometimes even higher than that, too.

"It was almost like people were thinking: 'What would liberation look like?'" Hazel Clark, a professor of design and fashion studies at Parsons, said in an interview. "Women in the 1950s and '60s were dressing in very conservative ways but communicated subtly, like wearing a short skirt or wearing their hair a certain way."

The miniskirt, which was coined by Mary Quaint in the late 1950s, was the women's rights movement of the 1960s encapsulated. With many people offended by the short skirts, wearing one became more of a political act than even a fashion statement, saying that yes, women will wear — and do — whatever they damn well please (as long as it's legal, really).

The mid-to-late '60s was a time of intense political warfare. With the Vietnam War coming to a head and political events like the shootings of former President John F. Kennedy, Martin Luther King Jr. and Bobby Kennedy, the nation was feeling helpless.

And so arose the hippie movement, which grew among young people yearning for less of how their parents lived and more peace and tranquility at a time of generalized despair.

Gathered at music festivals where psychedelic rock 'n' roll from the likes of Jefferson Airplane, Jimi Hendrix and Janis Joplin blared, the hippies created a uniform of sorts with flowers in their hair, peace signs, flower dresses and fringe jackets. It was bright, it was hopeful. Hippies often wore their hair naturally and embraced light florals, like it was about being earthy and natural, standing in stark contrast to the war and turmoil going on in the world.

"It was like people were taking one look at this time and its darkness and wanting to go in the exact opposite direction," Anya Kurennaya, an adjunct faculty member at Parsons, said in an interview. "The flowers and colors and silhouettes were so wild."

Although the '70s had its fair share of loud and bold fashion too, in stark contrast to the turmoil of the Nixon administration, the next real counterculture movement that came with a style all its own was the '80s.

Much like the 1970s, the early 1980s were ruled mostly by conservative politicians, like Ronald Reagan and Margaret Thatcher. And yet again, this decade saw the popularization of another counterculture embraced by young people. This time though, it was the punks. Think of bands like the Clash or the Ramones.

In what looks like a total sartorial retaliation to conservatives toting neat business suits, the punk movement spread across America and England, with young women and men wearing harsh black leather jackets and plenty of piercings.

"Punk is a reaction to a super conservative climate," Kurennaya said. "I think punk in the U.S. is political. It’s interesting to look back at '80s and punk D.C. for an example that it was very much a reaction to Reagan and George H.W., too."

It was almost like they were dressing for war, with spiky shoes and even sometimes spiky hair. If they were at war with anyone at this time, it would be late '70s and '80s fashion, which called for outfits like brown polyester suits and long skirts.

So with this conservative time, fashion rebelled, going fully in the other direction.

2010s: This conservative time may signal a counterculture again

Now with this heated political climate that we have now, we're starting to see fashion react already. On the runways at fashion weeks less than 10 days after Trump was sworn into office, designers have responded by way of models holding protest signs and in military garb.

And we are entering a more conservative time politically, so we can look to the past or clues as to how people will react with clothing.

For Kurennaya, the signs are clear that we're up for another counterculture movement, fueled by young Americans. So far, American people have been drawn to crafts — like the pussy hats worn at women's marches across the country and world — as well as pins.

"It’s really interesting to see the resurgence of craft, like the pussy hats from last weekend and I think things like that will continue to happen," Kurennaya said. "As far as how people will show their resistance, it's going to be with hats and pins and T-shirts that have messages."

"I think there’s a very clear strong message within that movement that is very easily encoded through dress," Kurennaya said. "It's found in T-shirts and in fashion that is demonstratively black, like hair accessories or African patterns."

So although these are certainly unpredictable times, there's at least a precedent for how fashion will evolve over these next few years.