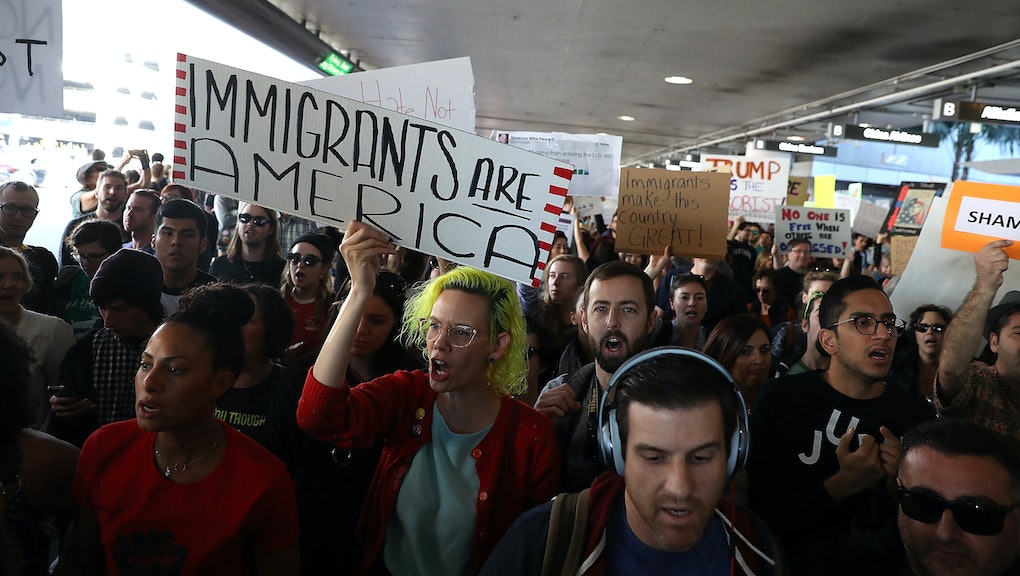 1965 Immigration and Nationality Act: What it is — and how Dems can use it against Trump

With Donald Trump's executive order banning citizens from seven majority-Muslim countries, many feel the president has effectively waged war on the diversity and immigration which define America. The key to stopping his decision may be the law that encouraged America's diversity in the first place: The Immigration and Nationality Act of 1965.

The act, also known as the Immigration and Naturalization Act or the Hart-Celler Act, is the foundation of America's current legal immigration system. Overriding past quota systems that heavily favored Europeans, the act declared that "no person shall receive any preference or priority or be discriminated against in the issuance of an immigrant visa because of the person's race, sex, nationality, place of birth or place of residence."

Here's what to know about the act and how it could be used against Trump's "Muslim ban."

The Immigration and Nationality Act

Prior to the passage of the 1965 bill, the U.S. immigration system was based on a quota law passed in 1921, which set the immigration quota for each country at 2% of that nationality's foreign-born population as counted in the 1890 census. This meant that immigrants from Northern and Western Europe were much more likely to immigrate than those from other areas of the world, according to the Migration Policy Institute.

Anti-racist forces, emboldened by the Civil Rights movement, led the U.S. government to finally reform the discriminatory system. In a 1963 speech, President John F. Kennedy spoke out against the quota system, calling it "intolerable."

The 1965 bill did not abolish quotas entirely, though the caps were no longer based on specific countries. The bill allowed 170,000 annual visas for Eastern Hemisphere immigrants, with no more than 20,000 per country, and 120,000 visas for immigrants from the Western Hemisphere. United States immigration policy has since been updated to allow for 480,000 annual family visas and 140,000 employment-based visas.

The act also makes family visas its first priority, reserving three quarters of the available visas for family members and exempting immediate family members of U.S. citizens from the annual visa cap. These provisions, however, had racist motivations, with conservative lawmakers assuming that this would preserve the country's existing white, European base, according to the MPI.

"Congress was saying in its debates, 'We need to open the door for some more British doctors, some more German engineers,'" Klineberg told NPR. "It never occurred to anyone, literally, that there were going to be African doctors, Indian engineers, Chinese computer programmers who'd be able, for the first time in the 20th century, to immigrate to America."

In fact, the 1965 government didn't really think much of the bill's impact at all. When he signed the bill into law, President Lyndon B. Johnson declared:

This bill that we will sign today is not a revolutionary bill. It does not affect the lives of millions. It will not reshape the structure of our daily lives, or really add importantly to either our wealth or our power.

Johnson's statement, it turns out, was patently false, as the bill ended up transforming America's population. Citing a study by the National Academies of Science, Engineering and Medicine, the MPI projects that one in four people in the U.S., as of 2015, are post-1965 act immigrants and their children.

As non-European countries ended their colonial rule, the MPI notes, immigration from these countries to the U.S. began to grow as European migration remained steady. As a result, the family provisions that conservative lawmakers hoped would preserve the white majority instead resulted in families from Asia and Latin America firmly establishing themselves in the United States.

While pre-1965 immigration was almost entirely from Europe, since 1965, the MPI reports, more than half of U.S. immigrants have come from Latin America, while a quarter have arrived from Asia. Between 1965 and 2015, the percentage of white Europeans in the U.S. population dropped from 84% to 62%, and the Pew Research Center projects that non-Hispanic whites will drop to just 46% of the population by 2065.

The law, however, has had its pitfalls. In 1964, Congress ended the Bracero program, which allowed Mexican agricultural workers to work in the U.S. in order to make up for the World War II labor shortage. The program's repeal, coupled with the 1965 act's cap on Western Hemisphere immigrants, led to a steep rise in illegal immigration, the MPI reports.

Now, the law that enabled America's diversity may be what stops Trump's attempts to curtail it. Those looking to oppose Trump's executive order can point to the simple non-exclusionary message at the bill's core.

In their defense of the bill, the Trump administration has pointed to a 1952 immigration law, which reads:

The 1965 bill is a clear way for Democrats to oppose Donald Trump's ban on immigration from majority-Muslim countries to the U.S. However, Bier notes since the 1965 bill applies solely to the "issuance of an immigrant visa," it may not apply in cases of those traveling temporarily to the United States, such as students, tourists and potentially refugees.

In addition to the 1965 act, NPR noted that lawyers may also use the right to due process and the First Amendment in their opposition to the executive order. Hopefully, though, the 1965 act will continue to inspire and advocate for America's diversity, as it has done for the past 52 years.